ALBUQUERQUE, N.M. — If you were, or know, a New Mexico Air National Guardsman stationed in Tuy Hoa,Vietnam, in 1968, Art Sena is looking for you. The reason goes back to a long-ago wish to make Christmas merrier for servicemen at war, and a long-lost box of film. 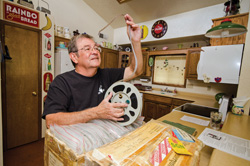 Art Sena, a Sandia National Laboratories retiree, looks at the original role of film that holds the greeting his family sent while he was stationed in Vietnam in 1968. “It’s a very emotional experience to watch it,” he said. (Photo by Randy Montoya) Click on the thumbnail for a high-resolution image.

Sena, a Sandia National Laboratories retiree, tracked down the box of more than 250 films of families sending greetings to loved ones in Vietnam, had them digitized and has been working for more than a year to get them to the veterans or their relatives. His reason is personal. He was one of the servicemen treated to a film in ’68.

Sena was a young guardsman from Albuquerque who had left his job at Sandia Labs to serve in Southeast Asia. Just before Christmas 1968 he was ordered to go to the first sergeant’s office, and called into a small room.

The sergeant told Sena to sit down, and that he wanted to show him a film. A projector came to life and an image lit up the screen. It was his mother. His grandparents were there, too, and his brother and girlfriend. They were talking to him.

“All these years later, I can still remember how it felt. It was very emotional to see and hear them. The tears streamed down my face,” Sena said. “I had been in Vietnam seven months and mail was sporadic so I hadn’t heard much from my family, and there they were. Everybody spoke. It was a wonderful thing. I only got to see it once then they said, ‘OK, back to work.’”

Sena, who returned from the war in 1969 to his job in the Sandia mail room, never forgot the film and over the years wondered what happened to it. He learned hundreds were made and later stored in Sandia’s film archive department. The archive was cleaned out in the late 1970s and the films sent to the Air National Guard in Albuquerque.

When Sena retired from Sandia in December 2005, he thought again about the Vietnam films and mentioned them to a friend who also had served in the New Mexico Guard. “I told him those films had to be out there somewhere and he said he’d find them. I didn’t think he was serious,” Sena said. “Two or three days later, the phone rang and it was him saying he was at Guard headquarters looking at a box full of film.” 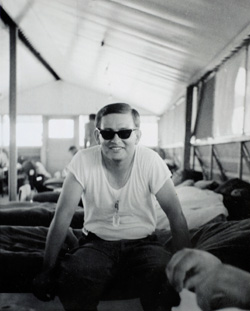 Sena was photographed on his bunk in Vietnam in 1968. Sena was with the New Mexico Air National Guard when he left his Sandia National Laboratories job to serve in Southeast Asia. (Photo courtesy of Art Sena) Click on the thumbnail for a high-resolution image.

Sena got permission to take the 39 reels with 269 messages and tackle the huge project of digitizing the 16mm film. An even bigger job has been finding the veterans and their families and getting individual DVDs to them. Sena has reached more than 95, and continues the search.

It has been a labor of love. “I still get emotional being able to see and hear my mom and grandparents,” Sena said. “My grandparents have passed, and I loved them dearly. I knew that other families would want the same thing. It would mean something to so many people.”

A round trip ticket to Vietnam

The film project began in 1968 with Ralph Looney, an Albuquerque Tribune editor. Looney knew that about 500 New Mexico National Guardsmen — the 188th Fighter Squadron, part of the 150th Air National Guard — had been deployed to Vietnam and he wanted to film holiday messages from their families. He got help from the Guard, which provided contact information and a location at Kirtland Air Force Base, and from Sandia, which offered the equipment and expertise to shoot and process the film.

“Ralph had the idea to get our families in there, make two-minute films and he would hand-carry them to Vietnam,” Sena said. “He would spend a few days there while the films were played, then bring them back to Albuquerque.” That’s exactly what Looney did.

Sena’s mother, Jo Sena, at the time an executive secretary at Sandia, told her son she and the family waited in line for hours outside the Air National Guard office to go on camera.

“They all told me they missed me and loved me,” Sena said. “My mom was a single mom who had to work to support us, so I spent a lot of time with my grandparents. In the film my grandmother scolded me for not writing more often.”

Sena was again overcome with emotion when he re-watched his film 40 years later. “When the image came on the screen I was awestruck at how beautiful my mom was,” he said. “I was bawling like a baby.”

In search of the families

To digitize the film, he turned in 2012 to Rolling R Productions owner Rhoda Weill, a former radio broadcaster whose Albuquerque company offers voice talent and digital conversion and reproduction services. “My brother was killed in Vietnam so the project was certainly interesting to me,” Weill said. “And I’m kind of geeky. I like looking at history.” 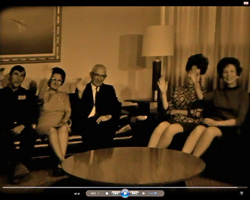 A frame from Art Sena’s family film shows, from left, his brother, grandparents, girlfriend and mom. “Everybody spoke,” Art said. “It was a wonderful thing.” (Photo courtesy of Art Sena) Click on the thumbnail for a high-resolution image.

It took Weill about four months to get the job done. “I watched every single film, and it was awesome,” she said. “It was interesting to watch the emotion. The moms were trying to be strong for their boys but sometimes they broke down and the camera kept rolling.”

Sena began contacting families in the spring of 2013. Sheri Maloy of Albuquerque was 10 years old when she, her sister and mother made a film for her father, Master Sgt. Don Day. Maloy’s husband knows Sena and heard about the film project. He surprised Maloy with her film on Christmas Day 2012.

“We opened all the presents and my husband said he had one last thing for me,” Maloy recalled. “I sat down and he put in the DVD and it was my mom and sister and me. I sat there and sobbed. It was just very emotional to see my mom speaking. My dad has passed away and she has Alzheimer’s.

“I remember going out to the base and talking to my dad on camera. I occasionally pull out the DVD and watch it. I am very thankful to Art for finding those tapes. It means a lot to me.”

If you were or someone you know was a New Mexico Air National guardsman stationed in Vietnam, contact Sena at (505) 873-1665.