ALBUQUERQUE, N.M. — Scientists at Sandia National Laboratories and their collaborators have developed a new membrane, whose structure was inspired by a protein from algae, for electrodialysis that could be used to provide fresh water for farming and energy production. 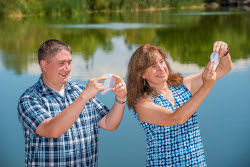 Susan Rempe, right, a Sandia National Laboratories bioengineer, and Stephen Percival, a material scientist, examine their biologically inspired electrodialysis membrane for producing fresh water. By mimicking an algae protein, the membrane can remove salt from seawater and wastewater to make fresh water while using less electricity. (Photo by Randy Montoya) Click on the thumbnail for a high-resolution image.

The team shared their membrane design in a paper published recently in the scientific journal Soft Matter.

The researchers found that the addition of a common amino acid, called phenylalanine, to an electrodialysis membrane enabled it to better capture and remove positive ions, such as sodium.

“Adding phenylalanine to the electrodialysis membrane increased the selectivity for positive ions by a significant amount, to our pleasant surprise,” Susan Rempe, the lead bioengineer on the project, said.

Ensuring an adequate supply of fresh water is a national security problem, she said. Fresh water is essential for everything from drinking and farming to producing energy from nuclear-, coal- and natural-gas-based power plants.

Currently, a method called reverse osmosis is used commercially to remove salt from seawater or brackish water to produce fresh water, but it has several limitations. One limitation is the need for high pressure to push freshwater out of an increasingly salty solution. The high-pressure driving force is costly and leads to the membrane getting clogged or fouled by undissolved material in the water easily, Rempe said.

The more concentrated the salty solution, the bigger the problem. As a result, there are few options for cleaning up salty wastewater. As an example, water produced by hydraulic fracturing to recover natural gas, which can be ten times as salty as seawater, generally gets buried underground instead of being returned to the environment, Rempe said.

Sodium and chloride are the two most common ions in seawater, and table salt. Of course, there are a variety of other positively and negatively charged ions in seawater and wastewater, too.

Electrodialysis is a potentially better method than reverse osmosis because it uses electrical current to draw out the salt ions, leaving behind fresh water. This requires less energy and makes the membrane less likely to get clogged, Rempe said. Electrodialysis needs a pair of membranes to produce fresh water, one that captures positively charged ions, such as sodium, and one that catches negatively charged ions, such as chloride.

Looking to biology for inspiration

Rempe and her team sought inspiration from biology in the form of a specific protein that transports ions called channelrhodopsin. Channelrhodopsin originally comes from algae and is commonly used in optogenetics — a technique in which biologists have targeted control of specific living cells using light.

This ion-transport protein allows many different positively charged ions through, including sodium ions, potassium ions, calcium ions and protons, but no negatively charged ions. This kind of selectivity is important for an electrodialysis membrane.

Rempe and former postdoctoral researcher, Chad Priest, saw that there was a lot of a certain kind of amino acid, called phenylalanine — one of the 20 building blocks that proteins are made from — along the protein’s ion-transport pathway.

“We’ve been working on the channelrhodopsin protein for quite a while, trying to understand its properties and how it is selective for specific ions,” Rempe said. “We noticed several phenylalanine side chains lining its ion-transport pathway and we wondered ‘What are phenylalanines doing in there?’ We usually think of phenylalanine as a molecule that repels water and ions in biological transport proteins.”

Rempe and Priest’s computational calculations showed that the phenyl side chain of phenylalanine forms a component of several binding sites along the transport pathway of the channelrhodopsin protein. Their calculations showed that those phenylalanine binding sites interacted with sodium ions enough so that the positive ions were stable, but not so stable that they would stop moving through the channel.

Rempe talked with Stephen Percival, Leo Small and Erik Spoerke, Sandia material scientists, about this biological oddity. The team thought incorporating the tiny molecule phenylalanine into an electrodialysis membrane might make it easier to separate positively charged ions from water during electrodialysis.

The process of making the electrodialysis membrane is somewhat like old-fashioned candle making. First, Percival dipped a commercially available porous support membrane in a positively charged solution, rinsed off the membrane, and then dipped it into a negatively charged solution. Because the solutions have opposite charges, they can self-assemble into a coating on both sides of the membrane, said Percival, who started working on the project as a postdoctoral researcher.

He did this with and without the phenylalanine to test how the addition of the amino acid affected the membrane.

Each two-solution cycle added a very thin layer of membrane that can capture positive ions. For this project, Percival primarily made membranes that were five or 10 two-dip layers thick. A five-layer membrane coating with or without phenylalanine was about 50 times thinner than a human hair. A 10-layer membrane was 25 times thinner than a human hair. The thickness of electrodialysis films is important because thicker films require more electricity to pull ions through.

Specifically, they found that the five-layer film with phenylalanine had selectivity similar to that of the 10-layer film without phenylalanine, but without the increased resistance associated with thicker coatings. This means that the phenylalanine film can effectively purify water while using less electricity, thus making it more efficient, Percival said. However, the amino acid was just mixed in the solution, so the team doesn’t know if it interacts with the positive sodium ions in the exact same manner as in the biological protein Rempe modeled.

“Between the bio-inspired nature of the project, working with experts across different disciplines and mentoring undergraduate interns, this is one of the papers that I am most proud of,” said Percival. “The paper’s findings were also very important. We were able to demonstrate that ion selectivity can be increased independently of the membrane resistance, which is quite advantageous.”

The Sandia team also collaborated with Shane Walker, a civil engineering professor at The University of Texas at El Paso, to further test the membrane. Walker and his team compared Sandia’s electrodialysis membrane to commercially available membranes in a complex, lab-scale electrodialysis system. They looked at a number of parameters including salinity reduction, electricity consumption and water permeance.

“Our UT El Paso partners analyzed our membrane in a real electrodialysis system,” Rempe said. “They put membrane samples into their lab-scale system, ran a whole bunch of tests and compared our membrane to commercial membranes. Our membrane did quite well.”

These results were published in a paper in the scientific journal Membranes on March 19. In the paper, the researchers concluded that while the Sandia’s bio-inspired membrane was competitive with commercial membranes, there is still room for improvement. Hopefully, companies can learn from this bio-inspired membrane to improve the efficiencies of their electrodialysis membranes.

In the future, Rempe would like to design an electrodialysis membrane that can separate out specific economically valuable ions, such as rare earth metal ions. Rare earth metals are used in automotive catalytic converters, powerful magnets, rechargeable batteries and cell phones and are mostly mined in China.

“The natural next step of the project is to use biology, again, as inspiration to design a membrane that will specifically move rare earth ions across a membrane,” Rempe said. “Rare earth metals are valuable, and the lack of domestic supply is a national security issue. Together, taking care of our water supply and recycling our valuable minerals are important for environmental security and climate mitigation.”

This project was funded by Sandia’s Laboratory Directed Research and Development program and the channelrhodopsin research was conducted at the Center for Integrated Nanotechnologies.