ALBUQUERQUE, N.M. — The largest missile ever to launch from Sandia National Laboratories’ Kauai Test Facility in Hawaii has shown the storied test range is still growing to meet the testing needs of advanced weapons systems. 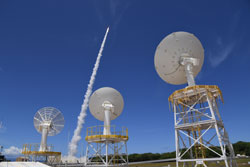 Sandia National Laboratories’ Kauai Test Facility, shown here in 2019, celebrated the largest launch in its nearly 60-year history in May. (Photo by Mike Bejarano and Mark Olona) Click on the thumbnail for a high-resolution image.

Sandia used the four years leading up the launch to ensure the test facility could safely accommodate the new vehicle.

“Sandia’s flight safety analysis takes into account hundreds of failure modes and real-time wind profiles to ensure risks are within acceptable safety limits for personnel and assets,” said Steve Lautenschleger, the now-retired manager for the mission.

The missile sailed over the Pacific Ocean on May 29 as a medium-range ballistic missile-like target for Flight Test Aegis Weapon System 31 Event 1, a test coordinated by the Missile Defense Agency and the U.S. Navy. It stood 60 feet tall with a 6-foot base diameter.

Johnathon Huff, Sandia’s acting associate labs director over National Security Programs said, “The launch of the largest guided rocket ever flown from the Kauai test facility represents a great achievement for a nationwide team during challenging operational conditions. The team showed excellent focus on the mission in the face of extended assignments. I am honored to be part of a team at Sandia that meets the challenge of executing new, technically challenging capabilities.”

Sandia operates the Kauai Test Facility, located on the U.S. Navy Pacific Missile Range Facility, the world’s largest test range, for the Department of Energy. Operational since 1961, the facility has supported more than 465 launches, including research and development, operational training and testing and evaluation.

This latest, record-setting shot was so large that the missile service tower had to be physically modified. Floors were adapted to the larger missile diameter, and a new, 10-foot tall launch stool was built for the launch. The tower gives workers access to the missile while it is sitting on the launch pad.

The modifications to the tower give Sandia flexibility to accommodate vehicles of different sizes for future launches. Several launches of a similar size to the one in May are now in planning stages.