ALBUQUERQUE, N.M. — Combat veterans often return with wounds, some visible, some not.

Sandia National Laboratories has launched a hiring program with the goal of helping those wounded warriors get into the workforce and develop career-based skills and experience. 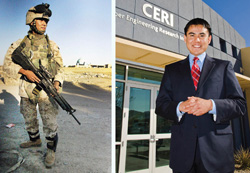 Cheston Bailon of Shiprock, N.M., was the first injured veteran hired under Sandia's Wounded Warrior Career Development Program. Bailon was a U.S. Marine deployed to Iraq and now works at Sandia in information technology. (Photo on left courtesy of Cheston Bailon; photo on right by Randy Montoya) Click on the thumbnail for a high-resolution image.

“We want to give back to those who have given so much to our country,” said James Peery, director of Sandia’s Information Systems Analysis Center and supporter of the Labs’ Wounded Warrior Career Development Program (WWCP). “They’ve earned the right to work here.”

Four people have been hired so far and three more have begun the process.

The program helps combat-injured veterans catch up to their peers who entered the civilian workforce instead of military service. “It can be hard for someone who’s been in the infantry or behind a rifle to develop technical skills and a resume,” said H.E. Walter II, a Sandia security specialist and co-chair of the Wounded Warrior Working Group, part of the Labs’ Military Support Committee. “They are trained, experienced leaders, but their skills don’t always translate into a civilian resume.”

Under the WWCP, successful applicants are hired for one to three years with the potential for permanent employment. An applicant can have been out of the military for any length of time. A college degree is not required, but those hired are expected to pursue higher education while working at Sandia.

“We are looking for highly motivated people who want to continue serving the nation and national security and have a passion to continue to improve themselves in skills and education,” Peery said. “Through their job, they gain training and experience while making contributions to national security.”

A key component of the program is mentorship. Wounded Warrior hires are assigned executive, technical and veteran mentors who help them adjust to the civilian workforce. Mentors serve as role models and peers the veterans can learn from and identify with. “The executive is there for career counseling, the technical [mentor] to get skills up to speed and the veteran to help with assimilation to civilian life,” Peery said. “It helps to have someone who’s been there.”

The employee “graduates” in one year to become a mentor to new WWCP hires, but still has access to mentors. “You never really lose your mentors,” Walter said. “Once in the program, always in the program. There are all kinds of additional roles to be a part of.” 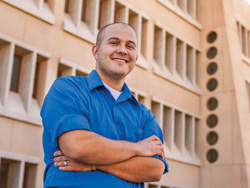 Sean Christopher of Albuquerque joined Sandia's Physical Security Services in March 2012 under the Wounded Warrior Career Development Program. He served in Afghanistan with the National Guard. (Photo by Randy Montoya) Click on the thumbnail for a high-resolution image.

The program is modeled after one at Oracle that focuses on helping wounded veterans who joined the military after high school catch up with their peers who went to college. “They lost ground because they served our country,” Peery said.

Wounded veterans interested in working at Sandia can go to the woundedwarrior.sandia.gov website, click on “View All Jobs” and enter the keyword “Wounded.” That will bring up current Wounded Warrior job openings.

Peery envisions bringing six to 10 combat-injured veterans to Sandia each year. “For every hour I put into this program, the Wounded Warriors give me 10 back,” he said. “These are people who have faced a bullet, likely lost buddies and survived horrific conditions. They bring to us incredible passion, loyalty, honor, commitment, sacrifice, integrity and maturity beyond their years.

“They bring a presence unlike most people, having gone through that experience of serving our country without question and putting their lives on the line every day. They get up every day and want to do more. I’m inspired by their desire to get back in the game. We have so much to learn from them.”

For more information, visit the Wounded Warrior Career Development Program. To contact the program send an email to woundedwarrior@sandia.gov.