ALBUQUERQUE, N.M. — Planets tend to cool as they get older, but Saturn is hotter than astrophysicists say it should be without some additional energy source. 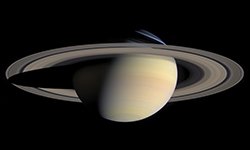 Results from Sandia National Laboratories’ Z machine provides hard data for an 85-year-old theory that could correct mistaken estimates of the planet Saturn’s age. (Image courtesy of NASA/JPL/Space Science Institute) Click on the thumbnail for a high-resolution image.

Experiments at Sandia’s Z machine may help solve that problem when they verified an 80-year-old untested proposition that molecular hydrogen, normally an insulator, becomes metallic if squeezed by enough pressure. At that point, a lattice of hydrogen molecules would break up into individual hydrogen atoms, releasing free-floating electrons that could carry a current, physicists Eugene Wigner and Hilliard Huntington predicted in 1935.

“That long-ago prediction would explain Saturn’s temperature because when hydrogen metallizes and mixes with helium in a dense liquid, it can release helium rain,” said Sandia researcher Mike Desjarlais. Helium rain is an energy source that can alter the evolution of a planet.

Knudson and Desjarlais are the lead authors of a June 26 Science article, “Direct observation of an abrupt insulator–to-metal transition in dense liquid deuterium.”

The tests ran on Sandia’s Z machine, the world’s most powerful pulsed-power machine, which sends a huge but precisely tuned sub-microsecond pulse of electricity at a target. The correspondingly strong magnetic field surrounding the pulse was used to shocklessly squeeze deuterium — a heavier variant of hydrogen — at relatively low temperatures. Previous experiments elsewhere used gas guns to shock the gas. This increased its pressure but at the same time raised its temperature beyond the range of interest for the density-driven phase transition.

Said Desjarlais, “When the liquid was compressed to over 12 times its starting density, we saw the signs that it became atomic rather than molecular. The transition, at three megabars of pressure, gives theorists a solid figure to use in their calculations and helps identify the best theoretical framework for modeling these extreme conditions.”

The results need to be plugged into astrophysical models to see whether the now-confirmed transition to atomic hydrogen significantly decreases the age gap between the two huge planets.

“The Sandia work shows that dense hydrogen can be metallic, which in turn changes the coexistence of hydrogen and helium in the planet,” says Mattsson. “The mechanism of helium rain that has been proposed is therefore very plausible, given our results, but the scientific discussion will continue over the next few years in establishing a new consensus.”

Interestingly, the determination that a metallic phase was reached was made optically. “There’s too much electrical noise in Z to make an electrical test, though we plan to directly measure current down the road,” Knudson said.

Optical tests rely on the transition from zero reflectivity (insulators) to the reflectivity achieved by metals.

“The only way you get reflectivity is when a material is metallic,” Knudson said. Reflectivity was tested across the visible spectrum because the experiment itself produced light. “We collected it, put it through a spectrometer to disperse it and passed it into a camera to observe it,” he said.

“This is a very nice merging of theory and experiment,” he said. “We threw all our computational tools — which are significant — at providing verification and interpretation of the complex experimental observations at Z.”

The work was done in collaboration with professor Ronald Redmer’s research group at University of Rostock in Germany and is a part of the Z Fundamental Science Program at Sandia. The multidisciplinary team included researchers with expertise in innovative experimental design, diagnostics and pulse-shaping capabilities, matched with theoretical analysis using methods based on quantum mechanics.

Other authors besides Knudson, Desjarlais and Mattsson include Redmer and Andreas Becker at University of Rostock and Ray Lemke, Kyle Cochrane, Mark Savage, and Dave Bliss at Sandia.