‘Zombie’ replica cells may outperform live ones as catalysts and conductors

ALBUQUERQUE, N.M. — “Zombie” mammalian cells that may function better after they die have been created by researchers at Sandia National Laboratories and the University of New Mexico (UNM).

The simple technique coats a cell with a silica solution to form a near-perfect replica of its structure. The process may simplify a wide variety of commercial fabrication processes from the nano- to macroscale.

The work, reported in the Proceedings of the National Academy of Sciences (PNAS), uses the nanoscopic organelles and other tiny components of mammalian cells as fragile templates on which to deposit silica. The researchers then heat the cell to burn off its protein. The resultant hardened silica structures are faithful to the exterior and interior features of the formerly living cell, can survive greater pressures and temperatures than flesh ever could, and can perform some functions better than when they were alive, said lead researcher Bryan Kaehr, a Sandia materials scientist. 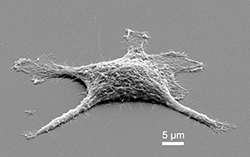 ZOMBIE CELL, first stage -- only moderately heated, the cell is now pure silica and needed a gold coating for a scanning electron microscope to image it. (Image courtesy of Bryan Kaehr) Click on the thumbnail for a high-resolution image.

“It’s very challenging for researchers to build structures at the nanometer scale,” said Kaehr. “We can make particles and wires, but 3-D arbitrary structures haven’t been achieved yet. With this technique, we don’t need to build those structures — nature does it for us. We only need to find cells that possess the machinery we want and copy it using our technique. And, using chemistry or surface patterning, we can program a group of cells to form whatever shape seems desirable.”

UNM professor and Sandia Fellow Jeff Brinker added, “The process faithfully replicates features from the nanoscale to macroscale in a robust, three-dimensionally stable form that resists shrinkage even upon heating to over 500 degrees Centigrade [932 degrees Fahrenheit]. The refractoriness of these delicate structures is amazing.”

The unusual but simple procedure may serve as a model for creating hardier classes of nanoscopic products.

Because a cell is populated by a vast range of proteins, lipids and scaffolding, its interior is ready-made to model catalysts, funnels, absorbents and other useful nanomachinery, said Kaehr, a former Sandia Truman Fellow.

Catalysts that evolve in cells are enzymes that have to retain a certain shape for their chemistry to work. Since structure is important to function, stabilizing a catalyst in the shape it evolved is important, Kaehr said. Heat-hardened silica would stabilize and protect the still-present protein as it did its work.

UNM post-doctoral student Jason Townson said the most immediate use for silicification may be as a simple way to preserve the structure of organic materials for imaging.

“Formerly, for internal preservation and subsequent imaging, a cell would be fixed in formaldehyde or some other preservative. But many of these methods are labor-intensive,” Townson said. “This method is simple. The preserved cells will never get sloppy in decay. And when we cracked open the resulting structure, we were blown away by how well the cell was preserved, down to the minor groove of the cell’s DNA.”

Heating the cell to still higher temperatures (greater than 400 degrees C) evaporates the organic material of the cell — its protein — and leaves the silica in a kind of three-dimensional Madame Tussauds wax replica of a formerly living being. The difference is that instead of modeling the face, say, of a famous criminal, the hardened silica-based cells display internal mineralized structures with intricate features ranging from nano- to millimeter-length scales.

The construction process is relatively simple: Take some free-floating mammalian cells, put them in a petri dish and add silicic acid.

Through the action of methanol, a byproduct of the acid, the cell’s lipid layers — the protective casings that keep the cell intact — are softened and made porous enough for the silica to flow in at about the temperature of the human body.

The silicic acid, for reasons still partially obscure, enters without clogging and in effect embalms every organelle in the cell from the micro- to the nanometer scale.

If the cell isn’t heated, the silica forms a kind of permeable armor around the protein of the living cell. This may support it enough to act as a catalyst at temperatures and pressures undreamed of by nature.

“Once we’ve used silica to stabilize the cellular structure, it can still carry out reactions and, more importantly, that reaction is stable enough to work at high temperatures,” Kaehr said. “The method is also a means to take a soft, potentially valuable biological material and convert it to a fossil that will stay on our shelves indefinitely.” 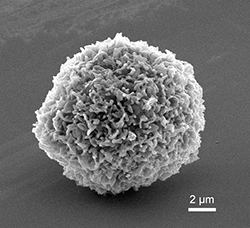 ZOMBIE CELL, ADVANCED -- This cell was pyrolized to 900 C in the absence of oxygen, leaving a cell of graphitic carbon and silica. Because carbon is conductive, the cell – practically identical to its protoplasmic original – doesn’t need to be coated in gold to produce an SEM image. (Image courtesy of Bryan Kaehr) Click on the thumbnail for a high-resolution image.

Ordinarily, preserving something organic means freezing it, which is energy-intensive, he said. Instead, “We’re doing rapid fossilization: quickly converting a protoplasmic cell into a hard structure that will stand the test of time.”

Experiments showed the cell can be used as a reverse mold from which, at 900 degrees C, a porous carbonized structure results from heating cell protein in a vacuum. In other words, in the same way that burning wood in air leaves a residue of structureless soot, the zombie heating method results in a high-quality carbon structure. Subsequent dissolution of the underlying silica support decreased the cell’s electrical resistance by approximately 20 times. Such materials would have substantial utility in fuel cells, decontamination and sensor technologies.

That such extraordinary results can be achieved by silicifying cells indicates many soft cellular architectures could be “feedstock for most materials processing procedures, including those requiring high temperatures and pressures,” according to the technical paper.

Other porous material structures, relying on titanium instead of silica, have been formed using the organic template technique. Other metal oxides, said Kaehr, are a possibility. These would have more complex structural functions or could serve as catalysts.

The work follows the efforts of a number of scientific groups, including Kaehr’s, that have built gel-like structures, copied them with silica and then burned off the gel to create, in effect, large sponges.

“Now we can change the biological shape and calcify (heat) it, so for the first time we get new irregular structures,” Kaehr said.

Summing up, Kaehr offers what may be the first distinction in scientific literature between a mummy cell and a zombie cell: “King Tut was mummified,” he said, “to approximately resemble his living self, but the process took place without mineralization [a process of fossilization]. Our zombie cells bridge chemistry and biology to create forms that not only near-perfectly resemble their past selves but can do future work.”

The work was supported by DOE’s Office of Science. Co-authors are Brinker, Brian Swartzentruber of Sandia and the Center for Integrated Nanotechnologies, and, from UNM, Robin Kalinich, Darren Dunphy and student Yasmine Awad.