ALBUQUERQUE, N.M. – Not everyone can play music. You need timing and rhythm, an ear for pitch and notes and an ability to interpret sheet music and symbols. You need physical coordination to apply those talents plus control of lungs, lips, arms and fingers to match the mechanics of a musical instrument. And you need strength and stamina to sustain the sounds you create. 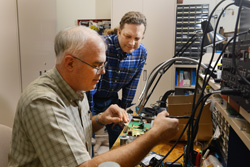 Sandia microsystems engineer Kent Pfeifer, left, and Taos businessman Dan Daily work on the circuitry for Daily's Midiwing musical instrument. The MidiWing can be played by anyone regardless of physical ability. (Photo by Randy Montoya) Click on the thumbnail for a high-resolution image.

Taos, N.M., musician Dan Daily can do all that. But he knows plenty of people who can’t. “My mom had a daycare center for severely disabled children when I was young. Those children impressed me,” Daily said. “They were pretty much regular people but with disabled bodies. That stuck with me.”

It inspired him to come up with a way for anyone to make music on an electronic instrument that got a boost with technical help from a Sandia National Laboratories researcher.

Daily, raised in a musical family in Chicago, went on to learn 20 instruments, from woodwinds such as flute, saxophone and clarinet to keyboard and bass. He earned a bachelor’s degree in music from the University of Illinois at Urbana-Champaign and a master’s in music education from Indiana State University.

But he never forgot the challenged kids cared for by his mom, a registered nurse. “When I realized how difficult traditional instruments are to play, I thought there had to be a way to make things easier and more accessible for people without the gifts I had been given,” he said.

Daily had a feeling electronics might bridge the gap between people with fine motor control and those without. Electronic instruments require the same techniques and coordination as regular ones, but Daily found he could separate the way notes are selected from how the instrument sounds. “With traditional instruments, note selection is intricately connected to the way the instrument is devised,” he said. “With electronics you can divorce those.”

Daily created a new instrument consisting of a microcontroller-based system that sends signals through a USB connection to another electronic device, such as a sound module or computer, which then produces sound. He named it MidiWing, a nod to the revolutionary MIDI (Musical Instrument Digital Interface) protocol, a set of commands that allows electronic musical instruments, performance controllers, computers and related devices to connect and communicate with each other.

MidiWing is a small box containing circuitry with several inputs that connect to switches and sensors, such as a joystick, mouse, slider or fader, that produce sound when moved. “You can plug in whatever control is appropriate to the person’s physical condition,” Daily said. “It sounds like any number of different instruments. The range of pitches can be narrowed or expanded, so the device can be made easier or more challenging as the person uses it and gets more familiar.”

He started work on MidiWing in 2000, six years after moving to Taos. His first prototype and pilot projects were completed in 2004.

Then Daily hit a wall. The microprocessor chip he used was discontinued and he didn’t have the resources to find another for the next prototype. “I was in a bad situation,” he recalled.

Daily turned to the New Mexico Small Business Assistance (NMSBA) program, which pairs entrepreneurs with scientists at Sandia and Los Alamos national laboratories. The state-funded program established in 2000 by the New Mexico Legislature helps small businesses get free technical support from the labs. It has provided $29.8 million in assistance to 1,876 companies in 33 counties.

Daily joined forces with Kent Pfeifer, a Sandia microsystems engineer who coincidentally has a background in music. Pfeifer plays trombone, piano and banjo, and was in his high school marching band. “I do understand music,” Pfeifer said. “I know how scales should sound and how notes are produced.”

Pfeifer helped Daily build a new prototype that uses an advanced, much more capable chip. “The idea was to build an instrument that has a whole bunch of different types of interfaces with the ability to run off a mouse, joystick or other kind of device that can be configured to the abilities of somebody with a disability,” Pfeifer said. “You can play it with your mouth, your feet or a single hand.”

Daily said Pfeifer took the concept and ran with it. “The implementation is all new,” he said. “MidiWing has a lot more inputs and can be configured in a number of different ways. There are more ways to control the instrument.” The advanced microcontroller circuitry inside the MidiWing musical instrument can calculate the many different frequencies or pitches that produce complex musical sounds from the position of a joystick, mouse or other input. (Photo by Randy Montoya) Click on the thumbnail for a high-resolution image.

Pfeifer reprogrammed and modernized MidiWing with advanced microcontroller circuitry that made it smaller and more functional. “MidiWing works with the synthesizer software in a computer,” he said. “A USB cable sends a series of hex commands built around the MIDI standard. The software in the computer interprets those and turns them into sounds.”

MidiWing can calculate the many different frequencies or pitches that produce complex musical sounds from the position of the joystick or other input. The instrument simulates frequencies that are normally produced by the technique of the musician, for example, by the pressure of a player’s lips on a brass instrument. “We know mathematically the frequency difference between note steps. We can write an equation,” Pfeifer said. “That’s programmed into this.”

Pfeifer was more than just an adviser, Daily said. “He was pivotal. It was an incredible collaboration because Kent is a musician,” he said. “The key to the whole project was that he understood what I was trying to do from a musician’s standpoint. He was perfect. He has a music background and designs microcontroller products. I can’t imagine how it could have gone better.”

Pfeifer and Daily work together a few hours a month and are close to having an inexpensive product that can be manufactured for schools, hospitals, therapy and rehab centers and other places where people want to make music. “My motivation is to bring music-making to more people,” said Daily, who founded a company, Musicode Innovations. “I’ve tested MidiWing mostly with children and disabled people. Children are perhaps the most successful. They are able to play far beyond what other music programs have ever produced. In a short amount of time they sound great.”

MidiWing earlier this year was named one of 10 NMSBA projects that delivered outstanding innovations through the program during 2011. Some 340 small businesses participated last year.

Pfeifer said he enjoys the MidiWing as a musician. “I come into the lab sometimes and just play it,” he said. “Then I’ll think, ‘Ah, I can make a change,’ and start programming. I want to make it even better.”

The New Mexico Small Business Assistance Program offers no-cost technical assistance to for-profit small businesses via lab staff at Sandia and Los Alamos national laboratories. Assistance is provided in amounts of $10,000 or $20,000 depending on company location. NMSBA is accepting applications for 2013 at its website, www.nmsbaprogram.org. The program will issue a call for proposals in early February for leveraged projects that allow several qualifying businesses to join together for technical projects worth up to $100,000 in assistance. For questions or to get on the NMSBA mailing list contact Genaro Montoya at gmontoy@sandia.gov or 505-284-0625.

View videos of people playing the instrument at http://www.youtube.com/midiwing.