ALBUQUERQUE, N.M. — Jeff Brinker, Sandia National Laboratories fellow and University of New Mexico regents’ professor, has been elected fellow of the oldest learned society and independent policy research center in the United States: the American Academy of Arts and Sciences. 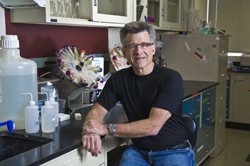 Sandia National Laboratories researcher Jeff Brinker was elected a fellow of the American Academy of Arts and Sciences. (Photo by Randy Montoya) Click on the thumbnail for a high-resolution image.

The academy’s 1780 charter states its purpose is “to cultivate every art and science, which may tend to advance the interest, honor, dignity and happiness of a free, independent, and virtuous people.” The academy’s broad-based membership — currently 4,900 fellows and 600 foreign honorary members — allows it to conduct a wide range of interdisciplinary studies and public policy research. The membership includes more than 250 Nobel Prize laureates and Pulitzer Prize winners.

“I am thrilled to have been elected to America’s oldest academy whose members include some of my personal heroes, including Martin Luther King Jr., Jonas Salk, Georgia O’Keefe, Albert Einstein, Charles Darwin and Benjamin Franklin,” he said. “My election into the academy would not have been possible without continued support from Sandia’s Laboratory Directed Research and Development program, the Department of Energy’s Office of Basic Energy Sciences, the Air Force Office of Scientific Research, the National Cancer Institute, the Defense Threat Reduction Agency, the National Science Foundation and the University of New Mexico.”

Brinker is among 177 new fellows and 36 new foreign honorary members.

“I hope to participate in the academy’s activities in the advancement and study of the key societal, scientific and intellectual issues,” Brinker said.

Brinker has made pioneering contributions to the processing and characterization of porous and composite nanostructured materials. He was one of the first to champion the need for multidisciplinary materials research. Later he led the creation of aerogels, the world’s lightest solids, by a method that eliminated the need for supercritical processing. In 1997, his group published pioneering work on evaporation-induced self-assembly of ordered mesoporous silica films, the first combination of controlled sol-gel chemistry with molecular self-assembly. Most recently, Brinker has worked with a revolutionary class of nanocarriers that deliver diverse cargos directly to biological cells.

He is currently a distinguished and regent’s professor of chemical and biological engineering at the University of New Mexico, and a distinguished affiliate scientist at the Center for Integrated Nanotechnologies, a Department of Energy Office of Science nanoscale science research center led by Sandia and Los Alamos National Laboratory.

The academy’s annual induction ceremony opens Oct. 5 at its headquarters in Cambridge, Massachusetts, with a formal ceremony Oct. 6.