Winner programs inclusion into everything he does

LIVERMORE, Calif. – Miguel Baez, Granada High School computer science teacher, was recently getting his students motivated after welcoming them back from lunch. After getting his class settled, he was interrupted by P.J. Daley, the school’s principal. 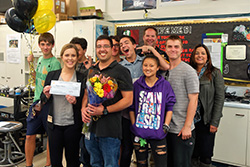 The class murmured to each other, trying to figure out why their principal had entered their classroom and why their teacher looked equally surprised. That was until Kelly Bowers, superintendent of the Livermore Valley Joint Unified School District, and Madeline Burchard, Sandia National Laboratories community relations officer, entered the classroom with balloons, flowers and an oversized check for $500 from the Livermore Valley Education Foundation.

“Out of hundreds of teachers in the district, your teacher is the winner of the Sandia Excellence in Teaching Award,” Bowers said. “He is being recognized for what many of you already know, which is that he is dedicated to finding new and interesting ways of teaching you all.”

Baez was initially speechless, but it didn’t take him long to find his words again and speak to his class. He impressed on the class that in the end, they are the reason he goes above and beyond.

“You all are my motivation,” Baez said. “Every time I see you all overcome a hurdle and not give up on yourselves and each other, you give me the inspiration to do even more. So, thank you for building me up every day.” 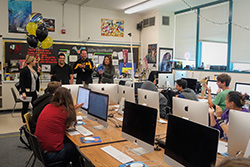 Baez was nominated for his dedication to making his computer science curriculum interactive and inclusive. One of his classes is a computer class for English-language learners, comprised of mostly Spanish speakers. Instruction is provided in both English and Spanish and includes talks by Spanish-speaking scientists and engineers.

Baez’s dedication goes beyond the classroom walls. He coaches CyberPatriots teams, including a team of mostly Spanish-speaking students. As a coach, he focuses on making his teams as inclusive as possible for all students, including those who have not taken a single computer science course. His teams have won cybersecurity competitions in San Francisco’s Bay Area and have served as examples that diversity makes groups stronger.

“Walking into Miguel’s class is like walking into a startup,” said Regina Brinker, the district’s science curriculum specialist. “The energy is high. Everyone is sharing ideas and collaborating. Miguel gives students the tools and boundaries to allow them to work at their highest capacities. He makes extra efforts to include Hispanic students, girls and other typically underrepresented groups in STEM.”

The Sandia Excellence in Teaching Award is presented annually to teachers in the Livermore Valley Joint Unified School District who use innovative ways to make science, technology, engineering and mathematics come alive for their students. The honor comes with a $500 cash award to each teacher. The award is managed by the Livermore Valley Education Foundation and funded by Sandia’s Corporate Contributions program.

Burchard said being part of the surprise is one of the reasons why she loves her job.

“Walking in and witnessing Miguel’s expression was priceless,” Burchard said. “It was as if we had just handed him a Publishers Clearing House check for a million dollars. Seeing the students cheer was a true testament of Miguel’s dedication to his profession.”