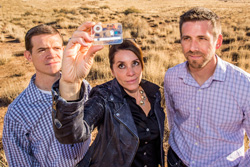 Sandia National Laboratories scientists, from left, Jason Harper, Melissa Finley and Thayne Edwards with a BaDx anthrax detector. The three were recognized by the Federal Laboratory Consortium for their work in commercializing the BaDx technology. The detector was licensed by a New Mexico company. (Photo by Randy Montoya) Click on the thumbnail for a high-resolution image.

ALBUQUERQUE, N.M. — Sandia National Laboratories won the Federal Laboratory Consortium’s (FLC) 2015 Award for Excellence in Technology Transfer for a credit-card-size device that can detect bacteria that cause anthrax.

BaDx (Bacillus anthracis Diagnostics) works in places with no power, refrigerated storage or laboratory equipment. It requires minimal or no training and makes anthrax testing safer, easier, faster and cheaper.

The annual Award for Excellence recognizes employees of FLC member laboratories and non-laboratory staff who have accomplished outstanding work in transferring federally developed technology. A panel of experts from industry, state and local government, academia and the federal laboratory system judge the nominations.

The technology was licensed to Aquila, a New Mexico woman-owned small business that specializes in the design and manufacture of technologies and services for nuclear security and international safeguards.

“It has been a remarkable experience to not only work with a Sandia research team in developing cool technology, but also with dedicated business partners to transfer that technology to,” Edwards said. “The awards that have recognized these efforts are another reminder to me of the great people I get to work with and the reward of solving difficult problems together.”

Jackie Kerby Moore, Sandia’s manager of Technology and Economic Development and the labs’ representative to the FLC, said the competition for this year’s award was especially tough. “Sandia’s BaDx technology transfer recognition was one of only three selected across all of the Department of Energy laboratories for successful technology development and deployment,” she says. “It is very satisfying to be recognized by our peers.”

Bacillus anthracis, the anthrax bacteria, is found in soils worldwide and can cause serious, often fatal, illness in humans and animals. It can survive in harsh conditions for decades. Humans can be exposed through skin contact, inhalation of spores or eating contaminated meat.

Currently, samples for testing must be propagated in a laboratory that uses specialized tools requiring a consistent power supply, something often unavailable in the developing world, said Finley, who helps veterinary labs in less-developed countries improve safety, security and efficiency at diagnosing infectious diseases. “Working with dangerous samples like B. anthracis spores places laboratory staff at risk,” she said. “Concentrating many positive test samples in a lab could also tempt someone to steal positive anthrax samples for nefarious uses.”

Another barrier is cost. “Farmers in many developing countries don’t make a lot of money, so they don’t pay for diagnostic testing often,” Finley said. “When they do, they can’t afford to pay a lot for it.”

The most common diagnostic test for anthrax costs around $30, which is out of the reach of many farmers, perhaps discouraging them from testing animals they suspect are infected, Finley said. The new device, which is like a pocket-sized laboratory, could cost around $5-$7 and does not require specialized tools.

Complex and sensitive, but simple to operate

BaDx needs no battery or electric power or special laboratory equipment. It’s hardy against wide temperature variation and can detect very small numbers of B. anthracis spores. A field technician puts a sample swab into the amplification chamber, which contains selective growth media. The device then uses a lateral flow assay, similar to a common pregnancy test, to detect B. anthracis. Magnetically operated valves allow the sample to advance from stage to stage to complete the testing process. A colored line appears on the device several hours later, if the test is positive for the bacteria.

The technician can then initiate a chemical process that sterilizes the device, avoiding the risk of positive samples accumulating and falling into the wrong hands. “The device amplifies the B. anthracis so it can detect as few as 100 spores instead of the typical 1-10 million required for detection,” Harper said.

Harper and Edwards developed the microfluidics platform with the patent-pending magnetic valves that move the sample through the testing process. Bioscientist Bryan Carson, with technologists Jackie Murton and Bryce Ricken, developed the selective media, worked on building and testing the device and helped develop the decontamination strategy. Nanotechnology researchers George Bachand and Amanda Carroll-Portillo are working on improved strips for the lateral flow assay. Bill Arndt, a researcher in Sandia’s International Biological Threat Reduction Program who regularly works in the developing world, provided guidance on device design.

Their work builds on Sandia’s long-standing expertise in bioforensics, most visible in the work the Labs did in response to the anthrax spores mailed to media offices and two U.S. senators in the fall of 2001, killing five.

“This is a wonderful example of where very sophisticated technology has enabled a practical solution to a very important problem” said Pete Atherton, senior manager of Industry Partnerships at Sandia. “Aquila has been a great partner for several years and their commercializing of this technology will help us fulfill our mission of serving the public good.”

The FLC is a nationwide network of about 300 members that provides a forum to develop strategies and opportunities for linking laboratory mission technologies and expertise with the marketplace.