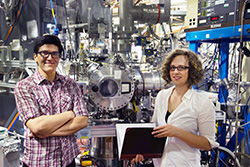 Sandia National Laboratories chemist John Savee, left, identified cycloheptadiene as the best fuel for creating a detectable QOOH, and Sandia computational expert Ewa Papajak, right, and her adviser, Judit Zádor, used quantum chemistry to explain the mechanism of the reaction. Savee and Papajak appear in front of an instrument, the Multiplexed Photoionization Mass Spectrometer in the Advanced Light Source at Lawrence Berkeley National Laboratory, that took direct measurements. (Photo by David Osborn) Click on the thumbnail for a high-resolution image.

LIVERMORE, Calif. — Sandia National Laboratories researchers are the first to directly measure hydroperoxyalkyl radicals — a class of reactive molecules denoted as “QOOH” — that are key in the chain of reactions that controls the early stages of combustion. This breakthrough has generated data on QOOH reaction rates and outcomes that will improve the fidelity of models used by engine manufacturers to create cleaner and more efficient cars and trucks.

Thousands of chemical reactions are involved in the conversion of a fuel’s chemical energy into mechanical work in an automobile engine. The fleeting molecules that initiate, sustain and then increase combustion are radicals: short-lived molecules that readily react and form new chemical bonds. Although many aspects of combustion are well established, a veil still covers ignition, the early stage of this process, and the chemistry that determines whether a fuel-air mixture will ignite rapidly, react slowly or extinguish.

Decades of research worldwide have shown that QOOH must be a central connection in the network of ignition reactions. Researchers learned this by studying the products of ignition chemistry, looking at this web of reactions from its perimeter and working inward, gradually deducing the nature of the “reactive intermediate” molecules that must lie at the center.

Nearly 10 years ago, Sandia researchers designed a new instrument, the Multiplexed Photoionization Mass Spectrometer (MPIMS), to directly probe all kinds of intermediates, including the species that are at the center of important webs of reactions. In 2012, the Sandia team, together with colleagues from the University of Manchester and Bristol University in England used the MPIMS to directly measure reaction rates and products of the “Criegee intermediate,” a crucial reactive molecule in the web of reactions that occur in atmospheric chemistry.

“We not only measured the Criegee intermediates and provided fundamental knowledge about Criegee reactions,” said Taatjes, manager of Sandia’s combustion chemistry department. “We also disclosed to other researchers the process for generating and measuring the intermediates on their own. The impact has been enormous, as others have taken this knowledge and put it to work.”

QOOH was next in line.

But even with processes and tools in place, creative thinking was called for, said Osborn, the chemist who headed the Sandia team. “We needed a specialized strategy to create enough QOOH radicals to detect, and we needed to determine the spectral fingerprint of a QOOH molecule, so that we would recognize it if we created it.”

Chemist John Savee came up with that strategy. Putting his knowledge of combustion chemistry to work, Savee helped pinpoint the best fuel for producing a detectable QOOH. He chose cycloheptadiene, a molecule with seven carbon atoms arranged in a ring.

Initial experiments seemed to prove Savee’s ideas were right, and the team turned to its computational experts, Papajak and Zádor, who used quantum chemistry to predict what the experimentalists should have observed. Agreement between the two approaches would aid in confirming the discovery.

For the direct measurements, the team moved the MPIMS to the Advanced Light Source, a synchrotron user facility at Lawrence Berkeley National Laboratory. The intense tunable light created by the synchrotron allowed the team to measure spectral fingerprints of molecules, deducing the particular arrangement of atoms that gives a molecule its identity.

They confirmed that the spectrum of the radical they observed matched that predicted by Papajak and Zádor, showing that it was in fact a QOOH molecule, rather than some other possible arrangement of the same atoms. Once again, the coupling of experimental results with computational verification gave the team confidence that they had detected and were measuring QOOH.

This teamwork was essential, said Osborn. “Everyone on our team sits under one roof in the Combustion Research Facility. This means we can quickly marshal experts from different fields to attack a problem on multiple fronts, leveraging ideas and sparking creativity. When we confirmed we were seeing the center of the early combustion web, and could measure how QOOH was created and consumed, that was a thrill.”

Impacts in combustion and beyond

The particular QOOH radical the team detected has a relatively long lifetime, reacting much more slowly with oxygen than any previous estimates. The impact of this class of QOOH radicals, which the team predicts will all have long lifetimes, is not yet clear, and their data will be incorporated into the latest combustion models to test its impact.

Interestingly, the same class of QOOH radicals has recently been proposed as a key intermediate that converts hydrocarbons in the atmosphere into small aerosol particles that impact health, visibility and climate. Present models of atmospheric aerosol formation can’t match the rate and size growth of these particles, and the QOOH intermediate may help bring observations and models into agreement.

With work done at Sandia and elsewhere, knowledge is growing about the chemical pathways of hydrocarbon oxidation. “We’ve been working on this reaction network from all sides for many years,” said Taatjes. “Now that we have directly measured reaction rates for a QOOH radical, we’ve filled in a large part of the picture.”

The researchers acknowledged there is still much to do to create a complete and accurate model of ignition or atmospheric oxidation. For example, measurements of other, more reactive QOOH species will be important for predicting ignition and oxidation behavior of a range of fuels.

“We know from our experience with the Criegee intermediate that researchers around the world will make great use of this information,” added Osborn. “And because these oxidation processes are important in many areas, including atmospheric studies, the impacts are likely to reach far beyond combustion.”

This research was funded by the Office of Basic Energy Sciences within the U.S. Department of Energy’s Office of Science.