Progress toward plugging an antibiotic pump

ALBUQUERQUE, N.M. — Each year in the U.S., at least 23,000 people die from infections caused by antibiotic resistant bacteria, according to the Centers for Disease Control and Prevention.

Using computer modeling, researchers from Sandia National Laboratories and the University of Illinois at Urbana-Champaign are helping to develop the means to prevent some of those deaths. 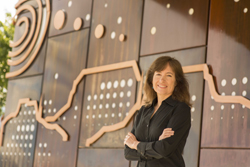 Susan Rempe stands in front of the Center for Integrated Nanotechnologies, where some of her research on bacterial pumps was done. Her team from Sandia National Laboratories and the University of Illinois at Urbana-Champaign are studying the pumps to understand the mechanisms behind antibiotic resistance in bacteria. (Photo by Randy Montoya) Click on the thumbnail for a high-resolution image.

One way bacteria develop resistance to many different antibiotics is by producing pumps that spit out unfamiliar small molecules, such as antibiotics, before they can do any damage. The researchers teased out the details of how one antibiotic pump works.

The eventual goal is to develop new drugs to plug the pump so it cannot spit out antibiotics, perhaps restoring their effectiveness, said Susan Rempe, Sandia computational biophysicist. She added, “Now that we have the structure of the pump and know how it works, scientists can design a molecule that sticks tightly to the transporter. I think that’s doable in the near-term, maybe five years.”

This research was recently published in the Proceedings of the National Academy of Sciences.

Their first step was to determine a detailed structure of the pump. The starting structure of the pump was very rough, missing much of the essential chemical details, and misshapen, Vermaas said. Rempe added it can be particularly challenging to get good structural data of drug transporters like EmrE because they are flexible. Imagine having to take a picture of a wriggling toddler with a sluggish camera: the resulting photo is more of a blur than an exact likeness.

They combined experimental data from a variety of common biophysical methods such as X-ray crystallography, cryo-electron microscopy and electron paramagnetic resonance spectroscopy as well as decades of knowledge of the most likely internal arrangements of amino acids, the building blocks of proteins, to produce a high-resolution structure of the pump.

“The big breakthrough was in how we could take poor structural data from experiments and massage it to come up with an improved structure we could work with to understand the mechanism of the pump,” said Rempe.

Once they had the detailed structure of the pump, the real work began.

First, the team added a lipid membrane to model the real-world environment of the pump. Then, they ran computer simulations to see what the pump looks like with zero, one or two protons. Letting in two protons is the battery that powers this pump. They ran simulations to see the transition from the protein facing inside the bacterium to outside in order to find the “easiest” path and thus see how the pump works. Modeling this “flip” took over 80,000 hours of computer processing.

They also ran simulations to see what the pump looks like with an example drug in the drug-binding pocket. Rempe said they found lots of flexibility in the pocket where antibiotics would bind, which makes sense given the pump can recognize a wide variety of drugs. They also identified a few critical amino acids that serve as a lock to make sure that the pump doesn’t let go of the protons willy-nilly.

“Antibiotic resistance is an important problem. The ‘lock’ on the pump is what makes this transporter tick. With this knowledge, in the future we can develop new antibiotics that aren’t pumped out or otherwise break the lock in EmrE,” said Vermaas. “If we figure out how to break the pump so it’s unregulated and leaks out protons, that would be a new way to kill bacteria.”

In addition to her work on antibiotic pumps, Rempe has also modeled a protein that transports anthrax toxins into host cells where they wreak havoc, allowing the Bacillus anthracis bacteria to thrive and cause anthrax. Rempe and her collaborators, including Sandia postdoc Mangesh Chaudhari, determined the molecular mechanisms of how these toxins make their way into the host cell and developed a plug to block this process. Sandia bioengineer Anson Hatch led a team that made and tested the plug.

In a three-year project funded by Sandia’s Laboratory Directed Research & Development (LDRD) program, Rempe is also leading studies of a new antimicrobial called teixobactin. Teixobactin blocks the production of the bacterial cell wall in a unique way that is difficult for bacteria to develop resistance to. She and her collaborators from Sandia and Illinois are using computer simulations and experiments to understand how the antimicrobial functions to make it more potent and broad acting. They published their initial findings in Chemical Science, revealing two ways the drug attaches itself to specialized fat molecules in bacterial membranes. The binding obstructs the building of the protective cell walls of bacteria.

Though it’s challenging for gram-positive bacteria, such as Staphylococcus aureus, to change how they make their cell wall to develop resistance to teixobactin, the antimicrobial can still be pumped out of bacteria before it does its damage, making Rempe and Vermaas’ research to understand the mechanism of antibiotic pumps relevant.

Rempe said, “Molecular dynamics modeling has very high resolution in space and time, which you don’t get from other experiments. We can see the dynamics over time in increments of one millionth of one billionth of a second. We can also see bits and pieces of a process that’s not resolved in experiments and determine which chemical structures contribute to the work involved. This gives us an advantage in learning how pathogens function, and that information can lead to new therapies to counter those pathogens.”

This project made extensive use of Sandia’s high-performance computing resources and was conducted at the Center for Integrated Nanotechnologies, a DOE Office of Science user facility jointly operated by Sandia and Los Alamos national laboratories.

“The small investment from the Campus Executive Program was done after carefully reviewing dozens of proposal ideas before selecting this one on antibiotic pumps,” said Eric Ackerman, manager of the nanobiology department. “Josh visited Sandia to work directly with Susan and her team, and these direct interactions helped immensely. The project was also a lesson in perseverance; it took several years of work before the paper was published. Their paper demonstrates the power of modeling to massage low-resolution structural determinations into useful mechanistic understanding.”