LIVERMORE, Calif. — Gene editing technology could one day eliminate diseases currently considered incurable. Thanks to a new test developed by Sandia National Laboratories scientists, that day is closer to dawning. 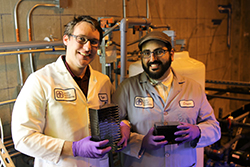 The protein responsible for cutting out disease-causing bits of DNA is not safe to leave in the body for long. That’s why scientists are searching for ways to shorten the amount of time this protein remains in the body after it has eliminated its target. To that end, the Sandia team has developed a first-of-its-kind test to quickly and accurately screen thousands of molecules for their ability to shut down this DNA-cutting protein.

This inexpensive test can look at the effectiveness of thousands of molecules at once. This is key because finding the few that work amongst the millions that don’t is a bit of a guessing game. As Sandia virologist and project lead Brooke Harmon explained, “Screening is a fishing expedition. Sometimes, you miss.”

Sometimes though, you succeed. The effectiveness of this test and the way it works are described in a new paper published in Analytical Chemistry, the American Chemical Society journal.

DNA cleavage: we can see it now

Gene-editing technology is based on the immune systems of bacteria. Using a system popularly known as CRISPR, bacteria save pieces of DNA from invading viruses. When the viruses return for a repeat attack, the CRISPR protein Cas9 is recruited by guiding RNA to bind, cut and destroy the viral DNA.

Scientists can now use Cas9 and guide RNA like molecular scissors to remove mutated DNA sequences and enable correction of genetic diseases. This opens the door to treatments for everything from cancer to genetic diseases like muscular dystrophy and cystic fibrosis to viral infections like Ebola.

However, the longer Cas9 is left in the body after it’s cut its target, the more likely it is to find and cut a similar-looking piece of DNA that should not be altered, which could lead to illness.

The first step in finding chemicals that can shut down Cas9 after it has done its intended work was developing the tool to find them. Sandia biochemist Kyle Seamon explained that the assay they developed places two chemicals on opposite strands of a piece of DNA. On one strand, the test adds a fluorophore, which emits light, and on the other it adds a quencher, which absorbs the light.

Next, the test adds the potential Cas9 inhibitor. If the inhibitor did not work, then Cas9 will cut the DNA, separating the fluorophore from the quencher and causing the test to emit a bright light within 30 minutes. If the inhibitor worked, the assay won’t glow.

But before the test can give this final result, the team has to add a chemical that causes Cas9 to release DNA. “Cas9 binds very tightly to DNA, even after it’s already cleaved, and keeps the two halves together. It doesn’t let go,” Seamon said.

For this reason, few Cas9 assays have been developed to test DNA cleavage, and the assays that do exist have not been compatible with high-throughput applications. They are designed to screen one or two chemicals at a time. With this combination of elements in place, the team has so far been able to screen nearly 200,000 chemicals for their ability to inhibit Cas9, and have identified six that work.

Continuing the search for the ‘off switch’

The pharmaceutical and agricultural industries are very interested in making the gene editing safer and there are multiple approaches being undertaken by researchers around the world. Harmon’s project, funded by Sandia’s Laboratory Directed Research and Development Office, is looking for small molecules that can be synthetically manufactured.

The naturally occurring anti-CRISPRs are small proteins. But even small protein molecules are so large they cannot be delivered into a cell for treatment without a separate chemical carrier such as a nanoparticle. Because protein delivery in general, and anti-CRISPR delivery in particular, is an important biotechnology goal, other Sandia projects have focused efforts on developing a particle that can deliver large molecules into cells without causing any adverse reactions.

However, small molecules like the ones being sought by Harmon and her team can penetrate cell membranes on their own without additional chemicals or carriers. One aspect of the team’s work going forward is to test hundreds of thousands of known small molecules for their ability to inhibit Cas9.

In addition to small molecules, the team will also screen small peptides and nanobodies for their ability to prevent Cas9 from cleaving DNA. In many ways, peptides are a happy medium between proteins and small molecules. Peptides can be engineered to penetrate cell membranes, they are less likely to result in side effects than small molecules, and they are easier to both produce and modify.

Antibodies are proteins that immune systems produce in response to invading foreign particles, and nanobodies are much smaller antibodies. They have several advantages in laboratory and clinical settings, including the ability to make a lot of them, keep them stable over time, and use them safely in cells. They are also able to successfully bind with targets that large proteins and traditional antibodies can’t reach.

By searching for the inhibitor in a variety of ways, the team hopes to increase the likelihood of finding ones with no side effects that can be manufactured and used in mice and human clinical trials. Currently, these tests can only be performed in vitro, in test tubes. One day, the team hopes the inhibitors will be found in doctors’ offices worldwide, alongside simple treatments for conditions once thought to be irreversible.