ALBUQUERQUE, N.M. — Sandia National Laboratories researcher Daniel Sinars has been elected a fellow of the American Physical Society (APS) through its Division of Plasma Physics. 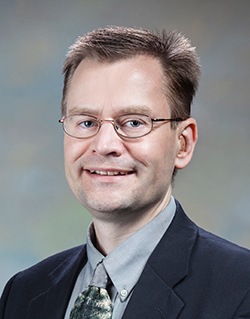 The distinction is awarded to no more than one half of one percent of the society’s membership.

Sinars said, “This honor is due to the many opportunities I’ve been given while working at Sandia, and the strong mentorship I’ve received along the way.”

Keith Matzen, director of Sandia’s Pulsed Power Sciences Center and an APS fellow himself, said, “Dan’s selection is a tribute to his research and leadership. While his election is an individual honor, it is also recognition of the team of people who have supported Dan during his career, and constitutes a great honor for Dan, our center and Sandia.”

Mike Campbell, deputy director of the University of Rochester’s Laboratory for Laser Energetics and one of Sinars’ nominators, said, “Dan is an outstanding scientist and I believe his influence will extend beyond Sandia as he becomes a leader for the national ICF and HED physics program.”

Mark Herrmann, former Sandia pulsed power center director and now facilities director at Lawrence Livermore National Laboratory’s National Ignition Facility, wrote in his nominating letter that Sinars “has had a remarkable impact on the field of pulsed-power-driven HED science and ICF. Over the course of his career, Dan has developed and applied innovative new diagnostic techniques in the challenging environment of the Z facility, advancing his own research and enabling many teams to develop new insights. … Dan has also been a leading experimentalist on the Z facility, acting as primary investigator on more than 150 experiments (almost one year’s worth of facility time), significantly advancing our understanding of magnetically driven implosions. He also has been a prolific writer of high-impact journal articles with 25 first author publications and 117 total publications,” many highly cited.

Sinars is the 11th Sandia researcher to be inducted as a fellow from Sandia’s Division of Plasma Physics.

He will receive his certificate at the annual meeting of the APS Division of Plasma Physics from Nov. 15-20 in Savannah, Georgia.