ALBUQUERQUE, N.M. – Benn Tannenbaum, manager of Sandia National Laboratories’ Washington, D.C., office, has been elected a fellow of the American Physical Society. He was nominated by its Forum on Physics and Society. 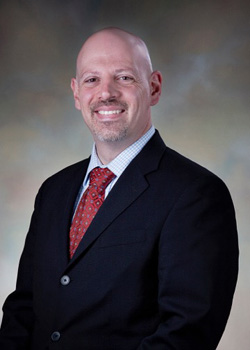 Tannenbaum was honored “for outstanding contributions to international peace and security by addressing nuclear arms control, nonproliferation and terrorism; and for mentoring young scientists and educating students to bring science to bear on societal challenges,” according to the citation.

Tannenbaum said, “I’m delighted and honored to be recognized for my work; I’ve been fortunate to work in a field where I can have an impact.”

Many of Tannenbaum’s contributions came while he was program director of the Center for Science, Technology, and Security Policy at the American Association for the Advancement of Science before joining Sandia in December 2010.

While with AAAS, Tannenbaum connected leading scientists with policymakers, particularly congressional staff, on a variety of national security topics through monthly seminars and other venues. He also directed expert advisory reports on such topics as nuclear forensics and nuclear weapons policy.

“We need more scientists and engineers to engage in the policymaking process, and I want to help all who want to,” said Tannenbaum. “I want to help others understand how they can work in policy, either as a career or while continuing to work as academics.”

Tannenbaum was a graduate student at the Fermi National Accelerator Laboratory. Following a postdoctoral fellowship at the University of California, Los Angeles, Tannenbaum made the transition from high-energy particle physics to public policy and nonproliferation through an American Physical Society Congressional Fellowship. He said the transition was a mix of “sheer happenstance” and a determination to forge his own path, which informed his commitment to guiding others through their own career transitions.

Kristen Hajduk, a mentee of Tannenbaum’s and currently an adviser for Special Operations & Irregular Warfare in the Office of the Assistant Secretary of Defense for Special Operations/Low-Intensity Conflict said, “His mentorship is a boundless source of career insights, up-to-date information on the nuclear security community, even advice on balancing professional and personal priorities. Despite his manifold interests and occupations, Benn always has time to discuss and debate with me as a professional and intellectual equal.”

Liz Chesney, a former graduate student of Tannenbaum’s and a consultant for federal agencies in policy analysis and strategic communications, added, “Tannenbaum’s mentorship has been a steady source of encouragement, helping me to bridge the world of science and translate it into effective public policy. His vast expertise and personable approach to mentoring make him a wonderful mentor and great source of professional guidance.”

Tannenbaum will be inducted with other new fellows at the American Physical Society meeting March 14-18 in Baltimore, Maryland.

Previously, Sandia employee Arian Pregenzer was nominated by the Forum on Physics and Society and elected in 2012 for her work in advancing arms control monitoring and verification technologies.