Armoring satellites to survive and operate through attacks

ALBUQUERQUE, N.M. — Satellites do a lot of things — they help people navigate from one place to another, they deliver television programming, they search for new stars and exo-planets and they enable the U.S. nuclear deterrence strategy. But until recently, one thing they haven’t done — or needed to do — is defend themselves. 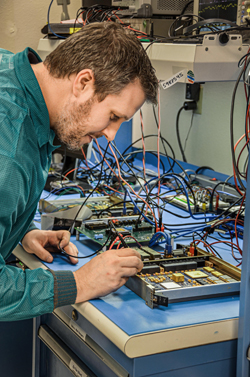 Sandia National Laboratories’ Drew Woodbury works on a flat-sat assembly designed to prove software and cyber defense algorithms work before deploying them on orbiting satellites. (Photo by Meagan Brace) Click on the thumbnail for a high-resolution image.

The intent of the campaign is for Sandia to take on a large national priority through its internal research and development investments, said Jeff Mercier, one of the campaign’s senior managers.

“Sandia has a long and successful history in space systems engineering. We helped develop Vela in the 1960s and have continued to regularly deliver satellite payloads since then. We need to ensure our payloads survive against emerging threats in space,” he said.

Sandia is looking to partner with U.S. universities who have a research focus in threat-defended hardware, cognitive analytics and/or sensor protection. Contact Sandia to discuss an academic partnership.

Deterring a war in space

According to a recent report by the U.S. Defense Intelligence Agency, more countries and businesses are participating in satellite construction, space launch, space exploration and human spaceflight than ever before because both technical barriers and costs are falling, but at the same time some foreign governments are developing capabilities to threaten others’ ability to use space.

“Space is important to our everyday lives, and space is also important to our national security,” said Drew Woodbury, the manager for STARCS. “Historically, space has been benign, but now U.S. four-star generals are saying that they expect a space war within my lifetime. When I say space war, I mean satellites attacking satellites.”

A satellite could be threatened in numerous ways, from launching a missile to destroy it to shining a laser at its optical sensor to temporarily disable it, Woodbury said. Other threats include directed or kinetic energy, electronic warfare, robotic mechanisms, chemical sprayers, high-powered microwaves, radiofrequency jammers and more.

“Our overall goal is to provide innovative research and development that preserves unfettered access to space for the U.S.,” Mercier said. “The key to deterrence in space is having systems with the ability to operate through an attack and keep doing their jobs.”

Taking inspiration from the human body to armor satellites

The three STARCS research areas — threat-defended hardware, cognitive analytics and sensor protection — will develop a satellite’s capability to automatically detect threats and defend itself to ensure that optical, radio frequency, reconnaissance and communications assets are preserved and operational during an attack. The campaign is also pursuing reversible threats — actions that temporarily disable an attacking satellite without destroying it.

“A satellite system is similar to the human body system,” Woodbury said. “Think of threat-defended hardware as the immune system encountering bacteria and viruses, while similarly, satellites have to withstand radiation, debris and other natural and man-made items in space. We want the immune system of the satellite to respond to debris in a resilient way.”

Woodbury said the sensor protection research area is like shielding human eyes with sunglasses or safety goggles. An adversary could shine a laser at a sensor on a satellite to stop it from working as designed, much like shining a laser into a human eye would impair eyesight. This research area focuses on technology that could act like a pair of “glasses” that a satellite can wear when it detects a threat.

The technology for the cognitive-analytics focus, Woodbury said, is like the medulla oblongata in the human brain — home to the “fight or flight” response. The research will develop that same instinct for satellites, so they can recognize attacks and deploy survivability mechanisms, he said.

Sandia launched 12 STARCS-related Laboratory Directed Research and Development projects this month, and Woodbury hopes to see even more projects per year for the rest of the campaign, which will run through 2027. About half of the projects launched this year include research partners from Sandia’s academic alliance schools, and the team is looking to partner with additional universities with relevant research focus areas.

“As the campaign continues, the ultimate results we are looking for is to develop more mature technology that can be transitioned to industry and the government,” Mercier said.