Hate to wait? Sandia looks to speed up climate research

ALBUQUERQUE, N.M. — Presumably, Leonardo da Vinci could have saved a lot of time on his “Mona Lisa” if he had just slapped on two dots and a swoosh for a smiley face. But details take time. The same goes for running computer models and simulations. If you want oceans of calculations to study something as complex as Earth’s climate, you’d better be prepared to wait. 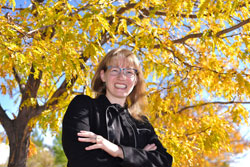 Sandia National Laboratories has awarded Kelsey DiPietro a Jill Hruby Fellowship for her work in applied and computational mathematics. (Photo by Randy Montoya) Click the thumbnail for a high-resolution image.

That can be a problem for a couple reasons. If your wait drags on for days or weeks, you might have to find a better computer, which isn’t always possible, or ask a simpler question, which could defeat the point of the research.

Sandia National Laboratories has awarded Kelsey DiPietro a Jill Hruby Fellowship, named for the first woman to direct a U.S. national security laboratory, to tackle this issue. The applied mathematician has proposed a way to make computer models more efficient — improving accuracy without increasing time or resources to run them.

Her technique changes how often a model makes calculations. If a model using her algorithms were predicting the thickness of an ice sheet over a large area, it would sprint through areas where there’s little change from one spot to the next, checking the ground perhaps every half mile, until it gets to an area that starts changing more noticeably. That’s when the model slows down and examines the ground perhaps every few feet.

Conventional programming only allows researchers to choose between the big picture or the details, but it doesn’t let them switch back and forth.

DiPietro will use her fellowship to first apply her method to climate research, working with the Energy Department’s supercomputer-powered Energy Exascale Earth System Model, or E3SM, which already has one of the finest resolutions ever achieved for simulating aspects of the planet’s climate. She previously proved her adaptive method as a doctoral student at Notre Dame University in South Bend, Indiana. Her three-year research appointment at Sandia began on Oct. 7.

Sandia is now accepting applications for Jill Hruby Fellowships starting in the fall of 2020. The fellowship is open to early career researchers. All interested individuals must apply by Nov. 1, 2019.

In addition to formal leadership training, DiPietro will participate on the Sandia committee that selects research proposals in computer information systems to be funded through Sandia’s Laboratory Directed Research and Development program.

“This is exactly what I want in a position,” said DiPietro, who was also a member of two academic leadership organizations while at Notre Dame, the Society of Schmitt Fellows and Ethical Leaders in STEM (science, technology, engineering and math). DiPietro believes that strong leadership leads to strong interdisciplinary collaborations. This is especially important for mathematics and computer science, she says, because many people don’t see these fields as particularly collaborative.

“There’s a lot of this weird stigma, or this idea, that we’re all isolated and work alone,” she said.

DiPietro plans to expand her research and team up with multiple research groups, not just E3SM, to enhance their work.

“National labs foster a collaboration that you don’t see in the private sector or in academia,” she said.

Her Sandia research mentor, computational and applied mathematician Denis Ridzal, says the impact of her research could be two-fold. It could let researchers increase the accuracy of a model without slowing it down, or it could let them maintain accuracy while lowering the computer system requirements to run it.

“There’s a strong need to reduce the size of computer models while maintaining their accuracy,” Ridzal said. “Kelsey’s work is a very important step in getting more people to use modeling and simulation tools. It helps achieve the required accuracy with limited computational resources.”

The Jill Hruby Fellowship is supported by Laboratory Directed Research and Development.