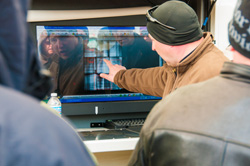 In a training session, bomb techs use Sandia National Laboratories’ XTK software to stitch together X-ray images of a suspicious package. The XTK team spent hundreds of hours with Explosive Ordnance Disposal technicians learning how they work.  (Photo courtesy of the National Nuclear Security Administration) Click on the thumbnail for a high-resolution image.

ALBUQUERQUE, N.M. — In the chaos that followed the terrorist attack at the 2013 Boston Marathon, bomb squads scanned packages at the scene for explosive devices. Two homemade pressure cooker bombs had killed three people and injured more than 250, and techs quickly had to determine if more were waiting to blow up.

They got help from X-Ray Toolkit (XTK), an image-processing and analysis software developed at Sandia National Laboratories that has swept the ranks of the country’s bomb squads. In fact, XTK has spread through the military and emergency response communities so rapidly that it’s now in the hands of more than 20,000 users across the globe. It also was adopted by the FBI’s Hazardous Devices School, which certifies the 467 recognized state and local bomb squads in the U.S., as its benchmark for all courses.

“XTK is the standard in the field not only nationally, but internationally. It made the average bomb tech a better bomb tech,” said Craig Greene, a special agent and bomb technician at the Albuquerque FBI. “In the past 20 years, the bomb technician community has progressed from the Stone Age to the 21st century in terms of equipment and procedures, and XTK is a major part of that progression.”

The toolkit got to the people who needed it so quickly due to a thoroughly unconventional approach to technology transfer. “The objective was to get the technology out so it could be used to save lives.” said Justin Garretson, lead developer of the XTK software.

“Those were foundational elements of the XTK licensing. It was a unique approach,” Westervelt said. “We hadn’t done anything like it on that scale before.”

Explosive Ordnance Disposal (EOD) technicians use portable X-ray scanners with image-processing software to look inside and analyze suspicious objects ranging from backpacks to battlefield improvised explosive devices (IEDs) to shipping containers. It’s a high-pressure, time-sensitive job. “Every mission is different,” Garretson said. “Maybe it’s just someone’s lunch or a hoax, but maybe it’s a pipe bomb. It’s all about speed, precision and accuracy. It’s about having all the tools you need, none that you don’t need and supporting the bomb tech’s natural work flow.”

Before XTK, bomb techs had to learn to use multiple software packages, most developed for medical X-ray or photography applications rather than emergency response.

The federal government wanted a specialized X-ray visualization tool, and Sandia was tapped in 2009 to develop XTK with funding from the National Nuclear Security Administration (NNSA) and the Department of Defense Combating Terrorism Technical Support Office. “We wanted something new and specific to the needs of national EOD personnel responsible for responding to nuclear terrorism events,” said Marc Phipps, a former Army non-commissioned officer and bomb technician who headed up the XTK project for NNSA. “I was an Army guy and knew we could do better.” 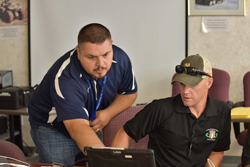 Bomb techs learn the ins and outs of XTK software custom designed by Sandia National Laboratories to meet their needs. (Photo by Randy Montoya) Click on the thumbnail for a high-resolution image.

The XTK team spent hundreds of hours with EOD technicians learning how they work and custom built the software to meet their needs. “There was a lot of collaboration. As a response organization, we were able to guide the software where it needed to be,” Phipps said. “We went out with local bomb squads and brought Sandia coders with us to the field. Justin would be in the classroom writing code while the techs were testing the software. We would de-bug it right there. He wrote the code during lunch and when the techs came back it was ready. We gave everybody everything they ever wanted. It was awesome.”

Garretson said Phipps had “a vision of what this software could be.”

“We’d get something done and he’d give us more,” Garretson said. “Make it do this, make it do that. Have it talk to the scanners, stitch images together, enhance so we can see things better, now add measurement tools. We did all that. Now make it compress the images so I can upload them over a satellite data-link. Piece by piece, Marc had us put into one user-friendly package all the tools that could make the bomb tech more effective.”

Phipps said there were dozens of versions of the toolkit before XTK 1.0 was ready. “We made it simple to use,” he said. “EOD personnel can customize the features and set it up the way they want to use it. They can manage an incident as needed.”

A bomb tech scans an object and acquires an image, then applies “all our XTK magic to it,” Garretson said. “But it doesn’t begin or even end with looking at the images. XTK assists the bomb tech in every step of the operation from planning X-ray exposures to transmitting images out of the field.”

Greene said bomb techs must manipulate a radiographic image to learn what it is. “XTK is very versatile and lets us manipulate the X-ray to identify certain components. There are no alternatives to identifying what’s in the X-ray,” he said. “That’s the key to rendering safe any IED or explosive. If you don’t know what’s inside the packet, the render safe tool might be wrong.”

In tandem, Sandia designed the patented Grid-Aim system, an optional hardware accessory kit for XTK that lets users quickly and precisely disable the internal components of an IED with minimal damage to surrounding property and infrastructure, preserving the rest of the device for evidence. 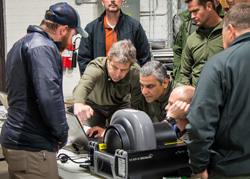 As XTK and Grid-Aim were being developed for government use, Phipps saw that the system could help military and civilian bomb techs do their jobs better. “We were working with FBI and state and local EOD people,” he said. “All the local guys said, ‘How do we get that?’ Well, the government paid for it, why not give it to them? So we gave it away.”

The technology transfer began in 2012 when the government began outside distribution of XTK software. “It was huge. People everywhere wanted it,” Phipps said. “We were teaching classes all the time and set up a website and 24-hour phone number. It was almost a full-time job answering emails and phone calls. It took off because it was what people needed.”

Sandia wasn’t able to train the tens of thousands of people who wanted XTK so the technology was licensed to multiple companies that provided training and helped get XTK widely distributed in a short time. Westervelt said instructors are tested and certified every year to maintain high-quality training. Grid-Aim was licensed separately to four companies that produce and sell the hardware.

XTK is used by the Department of Justice, Department of Energy and Department of Defense. U.S. allies including the United Kington, Australia and Canada use the software, with more requests coming in from international training partners. Sandia updates XTK regularly with new features and versions designed for mobile computer platforms, such as touch-screen tablets. “It keeps getting bigger,” Phipps said.

“XTK is a success story, taxpayer money put to good use,” Garretson said. “Even after all these years I get feedback all the time about how much of a difference it has made for people. One guy calls it the single most impactful, game-changing thing he’s seen in his years as a bomb tech. It bridged the gap between our world at Sandia and the rest of the world.”

Greene said bomb techs know and appreciate that NNSA, which funded the initial work, made the software available as a free app and continues to update it. “That’s important to them,” he said. “It’s their lives and the lives of others on the line.”