ALBUQUERQUE, N.M. — Imagine driving a car with no fuel gauge and no idea how big the gas tank is. You want to go as far as possible before filling up but not so far that you sputter to a halt. “That’s what it’s like to operate an electric plane or robot or other device that relies on a lithium battery,” said Albuquerque businessman Greg Walker. “I wanted a technology to show how much power such a battery has at any one time.” 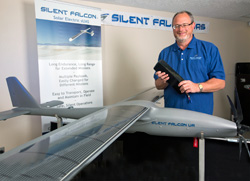 Dave Walker, chief operating officer of Silent Falcon UAS Technologies Inc. of Albuquerque, worked with a team from Sandia National Laboratories on smart battery software, hardware, programming and chemistry for his company’s electric-powered drones. “No single company has all the expertise,” Walker says. “Sandia has all the disciplines in one place.” (Photo by Norman Johnson) Click on the thumbnail for a high-resolution image.

Walker is the chief operating officer of Silent Falcon UAS Technologies Inc., which makes electric-powered drone aircraft. The company found four other small New Mexico businesses that use battery technology in everything from robots to motion picture filming, and joined forces to develop a way to monitor the health of battery packs for all kinds of unmanned vehicles. “Lithium batteries in aircraft and robots are very large,” Walker said. “Our challenge was to push the battery as far as possible but not crash.”

The group reached out to the New Mexico Small Business Assistance (NMSBA) program, a public-private partnership among Sandia National Laboratories, Los Alamos National Laboratory and the state of New Mexico that connects small business owners with scientists and engineers who give technical help.

They were teamed with Sandia electrical engineer Von Trullinger and materials scientist Dan Weskolowski who have improved the monitoring electronics and algorithms embedded in the battery hardware. Working over the past 18 months, they also improved software designed to communicate with device operators through a web or Ethernet connection. Users now can monitor battery condition and historical data and plan more complicated missions.

The companies, which have received $2 million in new investment and added nine employees since getting help from Trullinger and Weskolowski, were among 366 small businesses in 24 counties that participated in NMSBA last year. The program also contracts with the New Mexico Manufacturing Extension Partnership (MEP), the University of New Mexico (UNM) School of Engineering and UNM’s Management of Technology program at the Anderson School of Management, the Arrowhead Center at New Mexico State University (NMSU) and the New Mexico Tech Department of Management. NMSBA provided $4.77 million worth of assistance to New Mexico small businesses in 2015.

Walker said the battery management technology would not have been possible without Sandia’s help on software, hardware, programming and battery chemistry. “Everything about the technology is getting better,” he said. “We could not have pulled together a team like Sandia did. No single company has all that expertise in one place. Sandia does.” 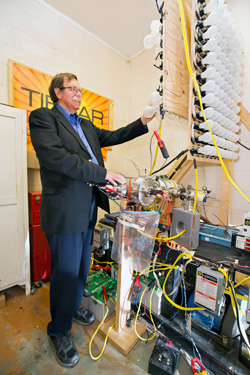 “NMSBA has been bringing small businesses together with scientists and engineers from Sandia and Los Alamos national laboratories for more than 15 years. This is a phenomenal way to assist small companies that don’t have the resources to do advanced research and development,” said Jackie Kerby Moore, Sandia’s manager of Technology and Economic Development. “National laboratory expertise helps these business people realize their dreams and stimulates our state’s economy.”

Other projects recognized at the Innovation Celebration:

NMSBA was created in 2000 by the state legislature to bring national laboratory technology and expertise to small businesses in New Mexico, promoting economic development with an emphasis on rural areas. The program has given 2,495 small businesses in all 33 New Mexico counties more than $48.5 million worth of research hours and materials. It has helped create and retain 4,863 New Mexico jobs at an average salary of $38,768, increase small companies’ revenues by $236.2 million and decrease their operating costs by $104.7 million. These companies have invested $97.6 million in other New Mexico goods and services, and received $87.2 million in new funding and financing.