The site, which began with a singular nuclear weapons mission, now supports all Sandia missions.

Nuclear weapons accounts for nearly half of the site’s work, along with strong programs in homeland security, transportation energy, cyber and chemical and biological defense.

“From the Cold War to today, we’ve been providing exceptional service in the national interest in Livermore for six decades,” said Marianne Walck, vice president of Sandia’s California site and the energy and climate program. “It has been a remarkable 60 years for the site. I’m grateful to be part of the continuing success in contributing to the security and well-being of our nation and the world.” 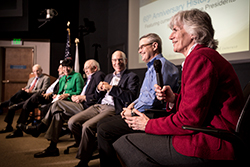 Vice President Marianne Walck, right, who oversees Sandia’s California site, participates in a panel featuring past vice presidents at the site. (Photo by Randy Wong) Click on the thumbnail for a high-resolution image.

To commemorate the 60th anniversary, the site last week held an event, “Honoring 60 Years of Engineering, Science, and Service.” The event featured a panel of former Sandia California vice presidents (including two who went on to become Sandia directors) and Walck:

Current Sandia President and Laboratories Director Jill Hruby participated via a taped video. Bob Carling, director of the Transportation Energy Center at the California site from 2008-14, moderated the panel, which discussed the history of the site and its contributions to the nation.

On May 21, the site will host a 60th anniversary community event at the Bankhead Theater in Livermore.

Sandia’s California site through the decades

The California site has changed significantly over the past six decades. The site, which was established by the Atomic Energy Commission to support projects for the University of California Radiation Laboratory (now Lawrence Livermore National Laboratory), continues to work closely with LLNL on nuclear weapons programs.

The first decade was largely devoted to weapons design and development projects, a dozen of which made it to the stockpile. The site provided early critical support functions in safety, use control, reliability, testing and analysis. One of the largest and most successful programs during this time was the W47 warhead for the Polaris missile. Environmental testing and systems studies were initiated during this time. The site also assumed responsibility for gas bottles and obtained its first computer system, the Elecom 125, to calculate flight trajectories and stress analyses. Early in the 1960s, the number of stockpile weapons rose as Cold War tensions mounted. The site developed expertise in welding and microelectronics.

“Since the mid-50s, the California site has played a major role in ensuring the safety, security and effectiveness of the current stockpile,” said Russ Miller, director of Sandia’s Weapons Systems Engineering Center in California. “We developed and advanced the scientific and engineering capabilities required in meeting the needs of the national security missions.”

The 1970s were marked by the nation’s first major energy crisis and the establishment of the Department of Energy. The California site quickly moved into energy alternatives and efficiency with programs in solar and combustion. The Combustion Research Facility (CRF) opened in 1980 to meet research needs in this area. The CRF has greatly expanded fundamental knowledge of combustion processes and contributed to significant design innovations for diesel engines, pulse combustors for furnaces and pollution reduction methods.

“The CRF has driven our scientific understanding of internal combustion engine processes that affect car efficiency and emissions,” said Bob Hwang, director of the Transportation Energy Center in California. “The CRF has had a major impact on every engine on the road today.”

During the 1980s, the emphasis in weapons work expanded to include improved safety and control systems and greater functionality and reliability. The site worked closely with LLNL on various stockpile nuclear weapons systems. The systems developed during this period included the W82 atomic projectile, the W84 warhead for the ground-launched cruise missile, the B83 modern strategic bomb, the W87 warhead for the Peacekeeper missile and the W89 warhead for the SRAM II missile.

From 1983 to 1992, the site was an active participant in research and development supporting the Strategic Defense Initiative (SDI). This was a period of intense activity at Sandia, with the California site playing a lead role. The site’s responsibilities included understanding the requirements for SDI systems, conceptual engineering design and development of advanced materials for use in several different concepts.

In the 1990s, the weapons program changed its focus from designing new warheads to science-based stockpile stewardship and to maintaining and refurbishing existing warheads. The California site and LLNL were responsible for the first warhead Life Extension Program (LEP) on the W87 warhead; other stockpile weapons were maintained and retired weapons were dismantled and disposed of.

The site’s national security mission also broadened in the 1990s to include homeland security, cyber and chemical and biological defense.

“The division has been addressing many emerging and evolving national security challenges,” said Duane Lindner, director of Sandia’s Center for Homeland Security and Defense Systems in California. “We have been able to draw upon many of our core science, technology and engineering capabilities to help invent, develop, demonstrate and deploy homeland security systems that are now helping defend the nation.”

The Livermore Valley Open Campus (LVOC) began to take shape in the 2000s. The LVOC was created along the boundaries of LLNL and Sandia’s California site as an innovation hub and novel venue for collaborations among experts from within and outside Sandia.

The future of the site continues to evolve with a new building, scheduled to open by year-end that will consolidate “front door” activities, house the site’s human resources department and host the training center for students and new hires. The new building will enable the site to use an existing building to expand its national security mission work. Plans for another new building called Collaboration in Research and Engineering for Advanced Technology and Education (CREATE) also will support the open campus vision. The proposed 86,000-square-foot building will provide additional space for engagement with industry and academia.