ALBUQUERQUE, N.M. — Sandia National Laboratories signed more than 5,000 U.S. partnership agreements in the past five years touching every state in the country, and has created an online map that brings them to life. 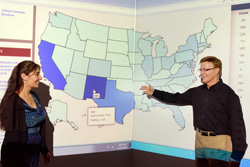 Pete Atherton, senior manager of industry partnerships at Sandia National Laboratories, goes over New Mexico information on the Partnerships National Reach Map with software developer Lozanne Chavez. The map shows the numbers and types of Sandia partnership agreements across the country. (Photo by Randy Montoya) Click on the thumbnail for a high-resolution image.

“The map illustrates the amazing breadth of work Sandia does with industrial, university, government and lab partners around the United States,” said Pete Atherton, senior manager of the labs’ Industry Partnerships department.

The Partnerships National Reach map has been in development three years. Atherton said it came about because many people inside and outside Sandia didn’t know the extent of the labs’ collaborations. “People often ask how many industrial partners we work with and when I ask them to guess, I hear 20, 30, 40. Actually, in 2014 we worked with 830 unique industrial partners,” he said. “The map takes it further to other types of partnerships. We wanted to tell the full Sandia story. This shows how much collaboration and technology transfer is really going on, and it doesn’t include the labs’ many global partners. That would be an even bigger picture.”

The map includes Cooperative Research and Development Agreements, Government Use Notices, technology licenses, Non-Federal Entity Funds-In agreements, the New Mexico Small Business Assistance program and the University Partnerships program. It’s on Sandia’s website and interactively displays the number of agreements and partners in each state as the mouse hovers above it. Filters include partner type, fiscal year and agreement type.

Lozanne Chavez led the Sandia software team that developed the map. “A lot of effort went into the data gathering and cleanup,” she said. “We pulled from five different data sources.” She said the site will be updated yearly.

Atherton said he hopes the map will help business people, economic developers and policymakers make data-informed decisions. By seeing the breadth of Sandia’s partnerships, all those parties build on them to foster future economic growth, he said.

“With partnerships in every state, Sandia further demonstrates that we are a national lab in every sense,” said Andy McIlroy, Sandia’s director of Research Strategy and Partnerships and deputy chief technology officer. “This tells a compelling story of technology transfer.”

Patricia Knighten, manager of the Office of Science and Technology at the New Mexico Economic Development Department, said the map shows how much a national lab can contribute to economic development. “This is great work, not just the website, but the partnerships,” she said.