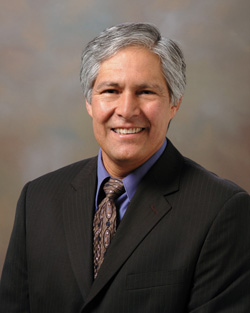 Most recently, Chavez has served as the director of the Monitoring Systems and Technology Center and the Remote Monitoring and Verification Program. In this position, he oversaw the research and development of sensor technologies for treaty monitoring and arms control, the satellite payloads and ground-based analysis systems that comprise the U.S. Nuclear Detonation Detection System and other technical national security products for the National Nuclear Security Administration and other government agencies.

“Jim’s distinguished career both as a researcher and a visionary leader at Sandia has made an impact on the major research and development portfolios he will be overseeing in his new role as vice president,” Hruby said. “I congratulate him on his new position and I am confident that he will continue to deliver with excellence on Sandia’s important national security mission.”

In his 33-year career at Sandia, Chavez has served in a variety of leadership roles and has broad research experience, including renewable energy, nuclear reactor safety and physical security. He also served as a congressional fellow for the American Society of Mechanical Engineers in Washington, D.C. He was a director of the Systems Research and Analysis Center and the Proliferation Assessments Program; manager of Sandia’s Government Relations Department; and manager of the Solar Thermal Test Department and the National Solar Thermal Test Facility.

Chavez joined Sandia in 1981 as a researcher in Intrusion Detection Systems. His early research included the development and demonstration of renewable energy technologies and he became an expert on molten salt systems, used to store heat from solar power systems, and solar power tower technologies. He authored more than 20 technical publications and articles on solar thermal energy.

Chavez, a member of the Executive Diversity Team at Sandia, received the Hispanic Engineer National Achievement Award for professional achievement in 1997 and serves on the National Hispanic Cultural Center Foundation Board in Albuquerque.

More information can be found at the International, Homeland and Nuclear Security website.