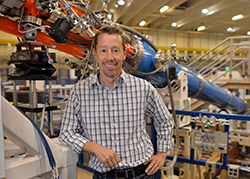 “The science of dynamic material compression is a core capability at Sandia. Washington State University also has a long tradition of excellence in research and education in this area. This agreement for a joint position across both institutions will push forward the frontiers of high-energy-density science,” Sandia vice president for science and technology Rob Leland said.

Said Daryll DeWald, dean of the College of Arts and Sciences at WSU, “Dr. Knudson’s appointment will be a tremendous resource for WSU graduate students and will provide more research opportunities for them. This joint position will help pave the way for new and beneficial partnerships between national laboratories and research universities across the country.”

Knudson, a fellow of the American Physical Society (APS), has subjected materials to extreme conditions at Z, a machine which uses massive pulses of electrical power to create huge magnetic fields or to accelerate materials to extremely high velocities of about 50 kilometers (31 miles) per second — far faster than a rifle bullet. Using these means, he has examined the response of materials at extremely high-energy densities. His results have helped reconcile conflicting estimates of the age of Saturn, altered scientific estimates of the amount of water on exoplanets and generally furthered understanding of the behavior of materials under extreme conditions.

“Since the 1950s, Washington State has had a vibrant program in the areas of dynamic compression and shock physics. Their alumni already have made outstanding contributions. I expect to help lead new science there and develop joint, nationally recognized competencies,” Knudson said.

Knudson is himself a product of WSU’s shock physics program. “Many of our past and present dynamic materials staff members at Sandia were educated at WSU,” he said. “Ultimately I look forward to mentoring and advising graduate students and postdoctoral researchers in projects utilizing the capabilities of pulsed power facilities at Sandia. I hope to create a pipeline of well-trained students capable of producing immediate impact in research.”

According to the terms of the agreement, Knudson will assist both institutions to develop new, joint, nationally recognized competencies and nurture core competencies within each institution with collaborations that manifestly benefit the community, state and nation.

“Many regard Duvall as a founder of shock compression science in the U.S.,” said Sandia senior manager Dawn Flicker.

Since the award’s inception, seven out of 15 Shock Compression Science Awards have gone to WSU graduates or faculty members.

A recipient of the 2001 award, Professor Yogendra Gupta, has led the shock-wave effort at WSU since the 1980s. With support from the Department of Energy Defense Programs, WSU established the internationally renowned Institute for Shock Physics in 1997 and continues to expand the national impact of dynamic compression research.