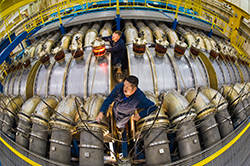 HERMES III, the world’s most powerful gamma ray generator, produces a highly energetic beam that tests how well electronics can survive a burst of radiation that approximates the output of a nuclear weapon. The machine can accommodate targets that range in size from a single transistor to a military tank.

The machine generates an intense electron beam at energies approaching 20 mega-electron volts. The electron beam is then guided into a very dense target called a converter. That interaction produces copious amounts of gamma rays. The thinness of the converter permits most of the beam’s energy to pass through it rapidly; thus, the passage causes minimum damage. This enables HERMES III to fire multiple shots at a time without having to re-establish the vacuum in which the experiments take place.

“HERMES III has gone hundreds of shots without any damage to its converter,” said Sandia manager Ray Thomas.

Also helpful for rapid firing is that HERMES III test targets are placed at one end of the machine rather than at its center.

“Our customers bring their own targets, place them at the front of the machine as we request and then remove them after the shot,” said technician Gary Tilley, who’s worked on HERMES III for 20 years. Other Sandia facilities, like its more famous Z machine, have to clean up the remnants of exploded targets placed at the center of their energy flows. 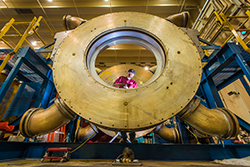 Technician Gary Tilley at Sandia Labs repairs a cavity at HERMES  III. (Photo by Randy Montoya) Click on the thumbnail for a high-resolution image.

Juan Diego Salazar is part of the team that watches to make sure each module receives the proper dose of power, at the right moment in time, to accelerate the beam.

“Every firing is different,” he said. “The test targets always change.”

Continual re-evaluation of the electrical power feeding the beam as it flows through its modules, and continual recalibration of the beam’s line of sight to the target, are necessary because an unobserved power or alignment failure somewhere within the system could mistakenly show a target more radiation-resistant than it actually is.

Real-time adjustments would be too late: The achieved beam flashes for 20 billionths of a second, about the time it takes light to travel 20 feet.

“Accurate results are important,” said Thomas. “That’s what we’re about.”