Even at 2000 degrees, the sealed, stainless-steel containers did not split open

ALBUQUERQUE, N.M. — A team at Sandia National Laboratories has completed a series of tests on specially designed stainless-steel containers used by the Department of Energy for storage and transportation of hazardous materials.

Click to watch a video showing a test where a stainless-steel container designed for the storage and transportation of hazardous materials is heated to 2000 degrees Fahrenheit for four hours at Sandia National Laboratories. The container did not catastrophically fail, instead small pinholes formed relieving the intense pressure. On the upper left-hand corner is an X-ray video from outside the container. The top middle image is a video from a pinhole camera inside the test chamber. The upper right-hand corner shows the outside of the test chamber. The bottom graph shows the pressure inside the container (white line) and the temperature of the container (in degrees Celsius) from nine different places (colored lines) during the test. (Video courtesy Sandia National Laboratories)

The engineers, technologists and project managers were surprised to find that the containers did not split open when heated to 2000 degrees Fahrenheit. That is almost as hot as a cement kiln.

“These containers were welded shut and heated to 2000 degrees, so we assumed that they were going to split open, but they developed small pinholes instead,” said Walt Gill, the test director and Sandia mechanical engineer. “We think the material inside reacted with the container itself and produced the pinholes in the container. These tiny holes let out all of the superheated gas without the containers pressurizing and pulling themselves apart.”

The series of 10 tests were designed to mimic a hypothetical raging-hot fire burning at a DOE facility and engulfing a container that had been knocked on its side and left outside of its insulated packaging, which protects it from heat. Since these containers are not designed to withstand such a fire, the goal of the test was to determine how much, if any, material stored within the container would be released into the air during such an accident, said Gill and Austin Baird, the test engineer.

Because the container is a complex, layered system of steel containers, hopefully any material that gets out through a pinhole would be contained or reduced by an outer layer. In 2018, the team conducted similar tests assessing the safety of similar containers.

This information will be used by policymakers to determine safety regulations to protect employees and the environment.

Nested containers for storage and handling 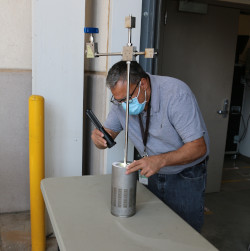 Victor Figueroa, a Sandia National Laboratories quality-assurance coordinator, inspects a specially designed stainless-steel container prior to heating it to 2000 degrees Fahrenheit to ensure the safety of the container for the storage and transportation of hazardous materials. (Photo courtesy Sandia National Laboratories) Click on the thumbnail for a high-resolution image.

The test series started last fall and was conducted at Sandia’s Thermal Test Complex. The Thermal Test Complex performs fire safety tests for a variety of programs from weapon systems to shipping containers, Gill said. The complex also has the capability to design and build custom heating chambers for those tests, as well as integrating the results from field tests with advanced computational modeling.

For the tests, the engineers heated the steel containers to 2000 degrees Fahrenheit in five minutes, and then held the containers at that scorching temperature for four hours in a custom-built cylindrical heater. This set of times and temperatures is designed to mimic a fire inside a building. Many things from construction materials and fire-proof safes are put through similar tests, Gill said.

“One of Sandia’s capabilities is that we have quality assurance under which we can conduct tests,” said Victor Figueroa, the quality-assurance coordinator for the test series. “I think that’s the biggest reason a lot of consumers, like Savannah River, come to us. We have the highest-grade quality-assurance administrative framework necessary to qualify items involved in storing and transporting hazardous material.”

Los Alamos National Laboratory was also involved in the test series. They loaded the predetermined mixture into the containers, Baird said. This mixture contained aluminum oxide — which is used in sunscreen, paints and glass manufacturing — different salts and water in various proportions. The Savannah River Site constructed the pressure manifold for the test and the Savannah River National Laboratory tested the containers for leaks. 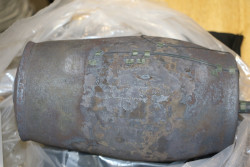 Baird added, “Since the results were very different than what we thought would happen, we’re looking at the gas compositions before and after to determine what kind of chemical reactions took place inside the containers.”

The Sandia engineering team started planning for the tests about two years ago, which included spending time designing and building the custom test setups. The fire tests also required a lot of specialized recording equipment to collect all the data necessary to inform policymakers. 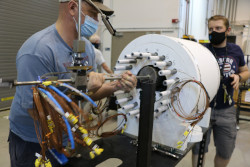 The team collected all this data with Sandia’s Mobile Instrumentation Data Acquisition System (MIDAS), in partnership with data-acquisition experts.

“The pinhole camera to look inside the test was a big deal,” Figueroa said. “We were actually able to see, in some cases, and get some idea of how big the pinholes were. We haven’t been able to do it in the past, due to the harsh test environments. As technology gets better, we’re able to make better assessments regarding safety.”

The fire tests are only one part of a suite of safety tests the nested containers, in their shipping configuration, must undergo to mimic the conditions of an accident, said Gill. The shipping packages are designed to withstand a hypothetical accident scenario without any release of material from the containers inside. After installing the container in the shipping package, the package is crashed into a hard surface, crushed by a heavy falling weight, punctured, dunked into 50 feet of water and, of course, burned in a fully engulfing fire.

To be certified by regulators, the whole package must complete all these tests with satisfactory results. He added, “These packages get really abused during the qualification test sequence to show that they’re safe.”

Figueroa added that the DOE has supported fire testing and qualification of a wide variety of packages for decades at Sandia.