ALBUQUERQUE, N.M. — Ever since the first human placed a bare hand on an uninsulated electric line, people have refrained from personally testing energetic materials. Even meters made of metal can melt at high voltages.

Now, using a crystal smaller than a dime and a laser smaller than a shoebox, a Sandia National Laboratories team has safely measured 20 million volts without physically contacting the electrical flow. (Residential voltage is generally 120 volts.) 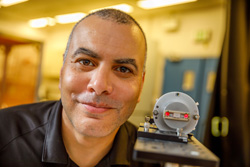 Sandia National Laboratories researcher Israel Owens holds the optical sensor used to house the crystal that proved central to his team’s successful attempts to measure very high voltages. The two red spots on each side of the crystal are due to laser light reflecting off the side mirrors used to direct light through the middle of the crystal. The actual experiments used green laser light. (Photo by David Bret Latter) Click on the thumbnail for a high-resolution image.

“No one had directly measured voltages this large anywhere in the world before our experiment,” said Sandia scientist Israel Owens of his team’s unique electrical and optical work, recently published in Nature’s Scientific Reports. “For measuring high voltages, the technique is safe, efficient and inexpensive.”

“When you have a high voltage over short distances, sensors break down,” said Sandia manager Bryan Oliver. “Israel’s diagnostic can survive these high electric fields and thus enable us to determine the voltage in an environment where that was previously not possible.”

The achievement, which multiplies every electrical field reading by the same constant to determine the voltage, opens a door to several possible applications.

“Being able to measure the output voltage of Hermes III instead of only calculating it allows us to accurately define the energies of the gamma rays,” said Owens. “And our crystal-laser system does it without disturbing the experiment environment.”

Benefits of precisely measuring the energy of gamma rays

The HERMES accelerator generates a high-energy electron beam that is stopped in very dense material and converted into a stream of gamma rays — the most energetic part of the electromagnetic spectrum. These rays have a wide variety of uses, including sterilization of hospital equipment, food pasteurization, medical imaging, smoke detectors, measuring the thickness of very thin materials and more. 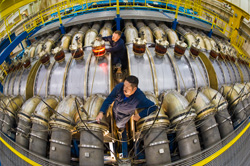 Because nuclear weapons also generate gamma rays, creating them in a lab can determine if military and civilian equipment could continue to function when exposed to those energy streams.

Accurately achieving the desired output of gamma rays requires calibration with the voltages that produced them; thus, the need for a sensor that can measure the high voltages without being destroyed.

The idea of using lasers as remote measurement tools is not new, said Owens. Laser infrared sensors are used at a distance to safely measure forehead temperatures. Laser range finders can determine the size of a room without the owner pacing the distance.

“Our procedure is a little different: We’re not pointing the laser directly at an object to measure its voltage,” he said. “We determine that information by using our laser simply to interrogate a secondary object — a lithium niobate crystal.” 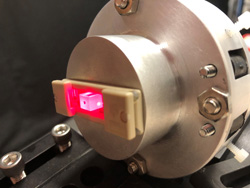 This laser-illuminated crystal, less than a half-inch long, is supported by a free-standing retaining structure with no physical connection to Sandia National Laboratories’ HERMES accelerator cathode. In the actual experiment, the light is initially extinguished by crossed polarizers. When the accelerator fires, the polarized light is rotated so that it leaks through the second polarizer. The leaked amount is directly proportional to the electric field. (Photo by Israel Owens) Click on the thumbnail for a high-resolution image.

The crystal, less than a half-inch long, is placed so that the electrical field passes through it broadside, at right angles to the polarized laser beam travelling along the crystal’s axis.

The electric field modifies the crystal’s capability to transmit light by causing its photons to travel at different speeds in the polarized beam’s vertical and horizontal directions. This causes the polarized light to rotate, changing the amount entering the photodetector. This instrument converts the laser beam’s intensity into a simple voltage which can be read on an oscilloscope.

“The voltage measured on the oscilloscope is directly related to the electrical field strength from which the voltage can be calculated,” said Owens. “In our experiments, tens of megavolts translated into hundreds of millivolts on the oscilloscope. (A megavolt is a million volts; a millivolt is a thousandth of a volt.)

“The signal is already in the correct form, and we just need to multiply by a fixed constant. There is also no need to perform any tedious calibrations or complicated post processing to determine the electric fields and voltages.”

The high voltages measured with the new sensor closely matched what was expected through calculations and other indirect measurements, said Owens.

Accurate measurement of the gamma ray energy might be only one of the benefits of the new measuring technique, Owens said.

“At the moment, this is a laboratory device for research, but as its development progresses it could find its way into various accelerator facilities where a series of crystals could provide voltage readings at multiple remote locations,” he said.

The technique also would work, he said, for the power transmission industry, auto manufacturers, lightning research centers “or anywhere one wants to remotely measure or monitor a very high energy source,” Owens said. The device also could “see” an electrical short in a wall from a distance due to the disruption in the electromagnetic field surrounding the current-carrying wire, which would allow non-invasive detection of a fault in the circuitry.

This research was funded by the National Nuclear Security Administration.