ALBUQUERQUE, N.M. — Researchers at Sandia National Laboratories are developing a promising new way to prevent the spread of radioactive contamination and contain the hot molten mass that develops within a nuclear reactor during a catastrophic accident. 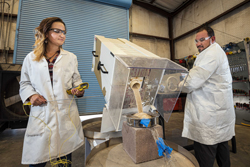 Sandia National Laboratories research team members Jessica Kruichak and William Chavez tested granular calcite and sand against lead oxide. The granular calcite and lead oxide had a leavening and cooling reaction, whereas the sand did not produce a reaction. (Photo by Randy Montoya) Click on the thumbnail for a high-resolution image.

During a three-year Laboratory Directed Research and Development project, a team of scientists discovered and patented a process for injecting sand-like minerals into the core of a nuclear reactor during an accident to contain and slow down the progression of a meltdown.

Sandia developed computer models and software (known as MELCOR) that show how corium, a highly radioactive lava-like mixture of nuclear fuel, fission products, control rods, structural materials and other components, melts through a nuclear reactor and spreads during a meltdown.

“During a severe reactor accident, the vessel that contained the fuel melts and ruptures, and then all that stuff falls out on the containment floor and starts spreading,” Sandia nuclear engineer David Louie said.

Businesses, universities, labs and other institutions interested in partnering on future work with injectable minerals for corium containment are invited to contact Sandia.

Nuclear reactor accidents are rare, but when they happen, the consequences can be devastating to people, the environment and public trust in the safety of nuclear energy, Louie said.

As a national lab, Sandia researches all aspects of nuclear energy, from production to waste transportation and storage, and works to ensure safety is built into each step. This includes using computer software like MELCOR to model catastrophic accidents to understand why they happen and study how different scenarios change the outcome.

When corium spreads, it can escalate the release of radioactive material into the environment in two ways, Louie said. It can melt through the building floor and seep into the soil and it chemically reacts with the materials it touches. For example, when corium reacts with concrete it can create hydrogen gas, which can lead to a possible explosion.

In actual nuclear reactor meltdown accidents and in modeled scenarios, the traditional approach has been to use water to try to cool down corium, but this process hasn’t worked fast enough to prevent the accident from progressing and contamination from spreading.

“Eventually corium stops spreading because water will cool it down,” Louie said. “But you don’t want the accident to get worse and worse while you’re working to bring water in. The water also provides a source of explosive hydrogen.” 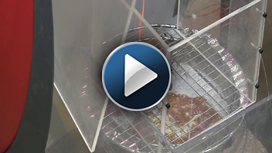 Click on the thumbnail to view the experiment of lead oxide reacting with granular calcite. (Video courtesy of Sandia National Laboratories). Members of the media may download b-roll of this experiment here (27 MB).

Louie, Yifeng Wang, Jessica Kruichak and other team members studied and tested natural carbonate minerals, such as calcite and dolomite, to determine whether they could help contain corium and keep a reactor accident from escalating. The first step was a small benchtop experiment using grams of molten lead oxide powder to simulate corium. The researchers heated the lead oxide to 1,000 C (1,832 F) and then poured the molten material over granular calcite. As a control, they repeated the test with sand (granular silicon dioxide) instead of calcite.

“We saw that the injectable carbonate minerals work,” Louie said. “It reacted chemically to produce a lot of carbon dioxide, which ’leavened’ the lead oxide into a nice cake-like structure. The reaction itself had a cooling effect, and all the pores in the ‘cake’ allow for further cooling.”

When sand was used in the control test, nothing happened, as the researchers expected.

The team then moved on to a larger kilogram-scale experiment using more lead oxide and granular calcite. They also repeated the sand control experiment on the larger scale. The results continued to show that injectable granular carbonates could be a promising solution to prevent corium spread, Louie said.

During the final year of the project, Louie, Wang, Alec Kucala, Rekha Rao and Kyle Ross translated the results of the experiments into MELCOR and built an accident sequence to model how injectable minerals would affect a nuclear reactor accident, similar to the Fukushima Daiichi accident in Japan.

The team has a non-provisional patent in progress for the injectable materials and is hoping to perform larger experiments using depleted uranium in the future, Louie says.

“After that, we’d be ready to commercialize the technology,” Louie said. “These materials could be retrofitted into any existing nuclear reactor design.”