ALBUQUERQUE, N.M. – Nature has had millennia to optimize biomaterials for useful properties, from lightweight strength to walking on smooth, vertical surfaces. Mother-of-pearl, spider silk, cholla wood “skeletons” and gecko feet are all good examples of nature’s brilliant materials engineering. The study of gecko feet spurred research into dry nano-adhesives, and research into lightweight yet twist-resistant tubes rediscovered the structure of cholla wood. 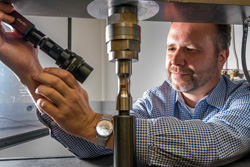 Sandia National Laboratories materials scientist Brad Boyce tests the mechanical properties of materials. Boyce typically studies metallic materials, but an unconventional foray into the biomechanics of cow eyes, the byproducts of beef processing, has paid dividends. (Photo by Randy Montoya) Click on the thumbnail for a high-resolution image.

Cornea tissue is a promising biomaterial for Brad Boyce, a Sandia National Laboratories materials scientist. More than a decade after Boyce and his co-workers investigated the biomechanics of dissected cow corneas, their findings have been confirmed in healthy human eyes.

In 2003, after attending a seminar on the mechanical properties of red blood cells, Boyce was inspired to write an unconventional Laboratory Directed Research and Development (LDRD) proposal. “Let’s do the mechanics of the eye, I think that’s easier than a red blood cell. I think we can handle that,” he remembered suggesting to a co-worker. To their surprise, the proposal was funded.

Cornea tissue must balance many demands

The cornea helps focus light before it hits the eye’s lens and serves as the transparent cover over the iris and pupil, protecting the eye from scratches and other injuries. The cornea also has to deal with the challenge of pressure changes within the eye. In an average human eye, pressure decreases about 25 percent from morning to evening.

The cornea is made up primarily of layers of collagen fibrils arranged in a particular manner. In the center of the cornea, over the pupil, sheets of fibrils are interleafed alternating between vertical layers and horizontal layers. On the outside of the cornea, near the sclera, or white of the eye, the fibrils curl parallel to the cornea edge, like ribbons around the brim of a hat.

“It still amazes me that the spacing of the fibrils is so well tuned for stability and transparency that the modest swelling accompanying death leads to cloudy corneas,” said Jones.

Boyce and his co-workers sought to understand how the cornea adjusts for those daily pressure changes and how the physical structure dictates its mechanical properties. It turns out this fundamental understanding has direct implications for glaucoma detection and Lasik, the vision-correction process in which a laser reshapes the cornea. However, the broader aim of Sandia’s LDRD project was insight into soft tissues, in general.

“You open up this insulated cooler and there’s a bunch of cow eyes looking back at you, not the best way to start a Monday morning. I’m not a biologist and I didn’t go into medicine for a reason. I get queasy if I see blood,” said Boyce.

Boyce and Grazier overcame their squeamishness to cut the cornea from cow eyes, byproducts of beef processing, and super glue them to a specially-designed pressurization chamber. Using a computational image triangulation technique known as digital image correlation they discovered the reason behind the peculiar collagen fibril arrangement.

Under near-normal pressures, the perpendicular arrangement of collagen keeps the center of the cornea stiff. On the other hand, the parallel fibrils give the rim enough flexibility to bulge or deflate to adjust to the eye pressure. The researchers speculated that this allows the central field of vision to remain more or less constant.

In December 2015, these results were confirmed in healthy human eyes by Ahmed Elsheikh and colleagues at the University of Liverpool. Now, the initial discovery by Boyce’s team can be unambiguously applied to Lasik technique development and other ophthalmological uses.

“We had hoped that this would translate to humans, and now that it’s been proven to translate to humans, it feels like it’s come full circle. Beyond that, it’s just reassuring that you’re doing all right in the lab, when somebody else gets the same result after a few years,” said Boyce.

In addition to providing the foundation for Elsheikh’s work, the LDRD project had another direct, practical impact that helps those suffering with glaucoma. Soon after the three-year project wrapped up, Nguyen left Sandia for a professorship at Johns Hopkins University.

Since Sandia wasn’t going to continue the work, Boyce’s team helped Nguyen pick up where it left off. Biomechanics of soft, flexible tissues, such as cornea and skin, is the cornerstone of her lab’s research.

“We modified the inflation method originally developed at Sandia to measure strains in the sclera, the white part of the eye. This region of the tissue is interesting because it influences the deformation and stresses experienced by the optic nerve. Excessive stress can cause progressive dysfunction and death of the optic nerve axons in patients with glaucoma, leading to blindness,” Nguyen said. “These results have motived the development of glaucoma therapies that modify the connective tissues of the sclera — either by stiffening or softening — to arrest the progression of the disease.”

In addition, Nguyen has expanded her research to investigating the biomechanics of the whole eye. She has studied the effect of glaucoma and explosions on the biomechanics of the eye. She has used mice models of glaucoma to test pharmaceutical agents for the prevention of glaucoma. In yet another benefit from the work, some of the researchers she has taught have come to work at Sandia, forming a sort of symbiotic pipeline.

“I’m glad because I don’t have to look at cow eyes anymore and I have other projects to worry about, but I’m also glad that somebody else has picked up that baton and run with it,” said Boyce. The LDRD project directly led to four biomechanics publications in addition to dozens of publications from Nguyen’s lab.

Less directly, the project helped build expertise at Sandia in digital image correlation (DIC), the computational triangulation technique they used. DIC closely monitors deformation of an object. Using many high-contrast speckles, two cameras and triangulation results in sub-pixel resolution. DIC was an up-and-coming technique when the team first used it; by studying cornea deformation the researchers gained a thorough understanding of it. Today, DIC is a powerhouse technique that Boyce uses daily.

In addition to gaining technical expertise, the heterogeneity of the cow corneas made an impression on Boyce’s overall approach to research.

“The cornea is probably the first project that really hit me over the head to say ‘You have to get your arms around materials variability, you can’t do business as usual for metallurgy,’” he said.

This materials variability thread has run through many of his other major projects such as the Engineering of Materials’ Reliability Research Challenge and the Predicting Performance Margins projects. Engineering of Materials’ Reliability is a decade long, interdisciplinary effort to develop a framework for predicting material variability with the goal of designing products that meet all requirements on the first try. Predicting Performance Margins uses the science of microscale structural differences to predict the variability large-scale object properties.

“LDRDs are supposed to be these far-reaching, long-distance projects that aren’t going to necessarily have a pay-off three or five years down the road. So many times people are off doing something different by that time that nobody even notices the long-term impact. I just happen to have sat at this desk for 15 years so I could see that long-term impact,” said Boyce.