Creating diamonds to shed light on the quantum world 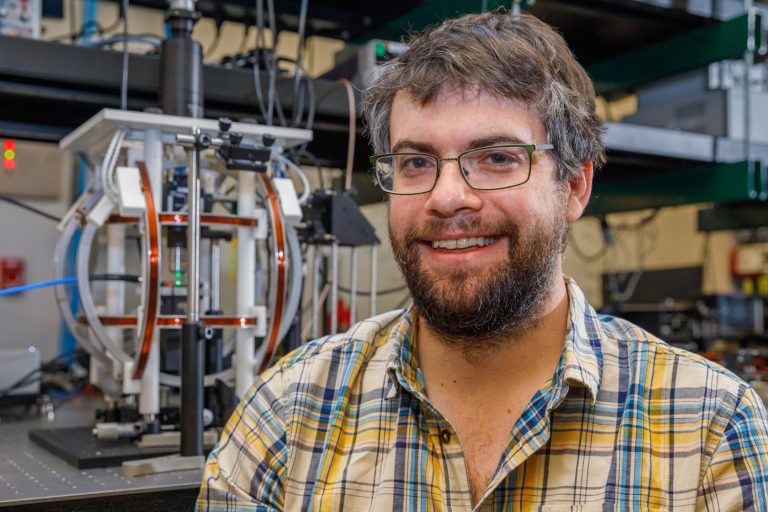 ALBUQUERQUE, N.M. — Diamonds are a scientist’s best friend. That much is at least true for physicist Andy Mounce, whose work with diamond quantum sensors at Sandia National Laboratories has earned him the DOE’s Early Career Research Award.

As a scientist in Sandia’s Center for Integrated Nanotechnologies, he specializes in making microscopic sensors to try to understand the nature of quantum materials and their electrons’ behavior. Mounce is an expert in creating nitrogen-vacancy defects in the artificial diamonds, which are extremely sensitive to the electric and magnetic fields at a nanoscale.

“With these quantum sensors we can study basic properties of low dimensional quantum materials, such as superconducting phases, magnetic phases,” he said. “A quantum material can be anything from a nanostructure to a large material that just has electrons that interact with each other very strongly. The distinguishing property, of a quantum material, is that their behavior is defined by quantum mechanics, so not your typical copper conductor.” 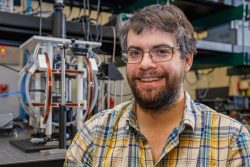 Sandia National Laboratories’ Andy Mounce makes microscopic sensors to try to understand quantum materials at the Center for Integrated Nanotechnologies. He is one of four employees to earn DOE’s Early Career Research Award. (Photo by Bret Latter) Click on the thumbnail for a high-resolution image.

“A topological phase breaks the classic paradigm of how materials traditionally go through phase transitions; they don’t behave like simple liquid to solid transitions. Furthermore, topological phases are really hard to detect, particularly at the limit of single atomic layer materials,” he said. “If we can harness topological phases in quantum materials, we can use them for a new generation of quantum computers or energy efficient devices.”

Mounce believes the diamond quantum sensors can bring unique insight into the signatures of topological phases in 2D materials, providing new insights into their emergence and basic properties.

“It’s very big honor and there’s a lot of qualified people out there, so I feel very lucky and honored to be considered in the same category as them,” Mounce said of other Early Career Research Award honorees. “I’m excited for the opportunity to even further build our quantum sensing program at CINT.”

Andy hopes to have CINT’s quantum sensing continually expand to users who would not normally have access to the equipment and expertise needed to perform these experiments on quantum materials.