Park responsible for $3.1 billion in economic activity since 1998

ALBUQUERQUE, N.M. — The Sandia Science & Technology Park, home to 26 buildings, 47 companies and organizations and more than 2,050 jobs celebrated its 20th anniversary Friday and highlighted the park’s economic impact through 2017.

The SS&TP, a 300-plus acre master-planned park located outside Sandia Labs and Kirtland Air Force Base, has generated $3.1 billion in economic activity since it was established in 1998, the report concluded. Called taxable personal consumption in the report, economic activity refers to spending on goods and services, government expenditures and private investments.

During the same period, the park also produced more than $123.4 million in tax revenue for the state of New Mexico and $22.5 million for the City of Albuquerque.

Younger congratulated the park on 20 years of success. He said the labs benefit from the SS&TP, empowering Sandia researchers with increased access to partners. 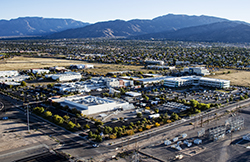 Since it was established in 1998, the Sandia Science & Technology Park in Albuquerque has grown from one company to 47 and has generated $3.1 billion in taxable personal consumption for the state of New Mexico. (Photo courtesy of Sandia National Laboratories) Click on the thumbnail for a high-resolution image.

“The Sandia Science & Technology Park is a successful public-private partnership that has had a positive impact on the community,” Younger said. “Sandia is committed to continuing to grow the park through collaboration, bringing long-term, high-quality jobs and economic prosperity to the city, county and state.”

Keller said the city is proud to be active in the park, which generates tremendous economic impact for Albuquerque and surrounding communities.

“The Science & Technology Park has spurred growth in the Southeast Heights while providing a gateway to science and technology for our community,” Keller said. “This park is an example of a project that hits the mark on placemaking and ensures we’re creating areas that will make our city succeed.”

From groundbreaking to growth

Celebrating at SolAero was significant because the SS&TP broke ground there in May 1998, said Jackie Kerby Moore, Sandia’s manager of Technology and Economic Development. The site initially housed EMCORE, the first park business. EMCORE transitioned to SolAero through an acquisition in 2014.

Sherman McCorkle, chairman of the board of the SS&TP Development Corp., said, “From a recovered brownfield to the premier science and technology park with more than $3 billion in economic impact in less than 20 years is a feat every state will envy. Our success comes from the outstanding collaboration from the many partners who make up the park.”

Along with celebrating the 20th anniversary and announcing the park’s economic impact, SS&TP recently received a Star of the Southwest Award at the Southwest Region Economic Development Association’s Conference in July. The award recognized the park for its economic impact success and for playing a meaningful role in Albuquerque’s future.

Jobs associated with the research park, which houses private companies and some Sandia National Laboratories sites in a collaborative environment, have paid out $5.4 billion in wages from 1998-2017, contributing significantly to the local economy, according to the report.

“High-paying jobs have a benefit for the city of Albuquerque and for the region as a whole,” said Dewey Cave, executive director for the Mid-Region Council of Governments. “The park continues to bolster the economy by providing competitive salaries, long-term employment and first-rate jobs.”

In 2016 and 2017, the park’s economic impact was $388.7 million in taxable personal consumption and it produced $15.4 million in tax revenue for the state and $6.6 million for the city. Wages in the two-year period totaled $747.7 million, according to the report.