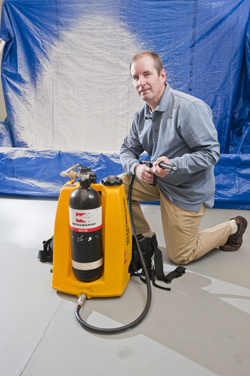 Mark Tucker, a chemical engineer in Sandia’s Chemical & Biological Systems Dept. and co-creator of the original decontamination foam, said it renders all types of typical chemical and biological agents harmless.

“For structures contaminated with meth, owners have two choices: demolish it or reclaim it,” said Kevin Irvine, vice president and general manager at EFT Holdings, which licenses the Sandia formulation and sells it under two names, EasyDecon ® DF200, certified against chemical and biological agents, and Crystal Clean, intended for meth cleanup.

The meth cleanup problem is a big one. The U.S. Drug Enforcement Administration’s (DEA) Clandestine Meth Lab registry lists thousands of locations in the U.S. where law enforcement agencies have found chemicals or paraphernalia indicating the presence of either clandestine drug laboratories or dumpsites.

In 2007, EFT released Crystal Clean, a chemically identical formula to EasyDecon DF200, but packaged and marketed specifically for meth cleanup. Sites contaminated with meth are considered crime scenes, but the contamination is chemical rather than biological. The approximately 700 remediation companies that clean up meth lab contamination also do other types of crime scene cleanup because they are accustomed to the sampling and documentation process.

“Property owners are often liable for expensive cleanup costs since most insurance companies won’t pay for cleanup related to methamphetamine, viewing damage resulting from meth labs as arising from a criminal act,” Irvine said. “That means that property owners and landlords are often left holding the bag for the cost of remediating a residence or business contaminated as a result of meth cooking.” 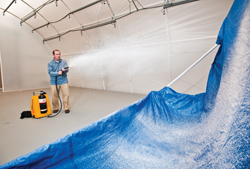 According to the Department of Justice, the chemicals used to cook meth and the byproducts from its manufacture, produce toxic fumes, vapors and residues. The report said anyone exposed to these byproducts, especially children, could suffer short- and long-term health problems. Prolonged exposure to meth byproducts may cause cancer; damage the brain, liver, kidney, spleen and immunologic system; and result in birth defects.

Tucker said many cleaning methods don’t remove methamphetamine and the chemicals used to produce it. Incompletely or improperly cleaned surfaces, such as floors, countertops and drywall, can remain contaminated for months or even years, even after many cleanups.

Sandia’s decontamination formulation includes a collection of mild, nontoxic and noncorrosive chemicals found in common household products, such as hair conditioner and toothpaste. It contains both surfactants, which lift agents off a surface, and mild oxidizers, which break down the agent’s molecules into nontoxic pieces that can be washed down a household drain like detergent or dish soap.

In experiments from a few years ago, John Martyny, associate professor and industrial hygienist at the National Jewish Medical and Research Center’s Division of Environmental and Occupational Health Sciences and a national expert on the effects of meth exposure on children, compared the effectiveness of common cleaners, such as detergent and bleach, on methamphetamine cleanup. Martyny included Sandia’s decontamination formula in the testing. His experiments showed that, after cleaning with EasyDecon, the methamphetamine present on tested surfaces was likely oxidized to another compound and was nondetectable.

Irvine said even if a meth site is known, it doesn’t always mean it gets cleaned up, due to the expense. Some states don’t have cleanup guidelines and don’t require homeowners to disclose whether a structure is contaminated with meth. Some families have discovered they were living in a house contaminated with meth only after family members were hospitalized for respiratory problems characteristic of chronic meth exposure.

In the 22 states that have guidelines, structures contaminated with meth are seized by police and the structure is quarantined by a local or state agency (depending on the state) until the structure is proven cleared of methamphetamine to a certain level.

During structure remediation with Crystal Clean, a remediation crew removes everything from the structure, including carpets and drapes, until the house is stripped bare except for the fixtures.

The crew mixes the Crystal Clean solution on site and sprays the foam on walls, ceilings and floors. The foam expands to about 15 times its liquid volume through a special nozzle that draws air into the spray, allowing it to reach contamination in crevices and in the air. In an hour, it collapses back to a liquid. Using only fresh water, rags and sponges, the crew then removes the benign residue from all surfaces.

After the site is cleaned, an independent industrial hygienist tapes off a sample area in the cleaned structure and takes a number of swipe samples appropriate for the location size. The samples are treated as evidence, a formal chain of custody is established and they are taken to an independent lab. The lab runs the samples through a mass spectrometer to determine the level of contamination. 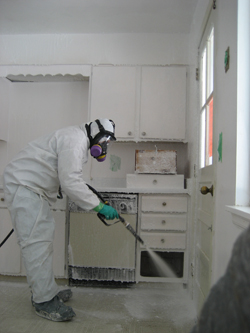 A remediator sprays Crystal Clean on surfaces of a house contaminated with methamphetamine. In an hour, the foam is rinsed clean with water and the remaining liquids are harmless enough to be put down a kitchen drain. (Photo courtesy of EFT Holdings) Click on the thumbnail for a high-resolution image.

Foam deployed as a preventive measure

In most instances, Crystal Clean reduces the levels to .02 μg/100 square cm (microgram/sq. cm) or less, which is considered nondetectable.

Irvine said the Crystal Clean formula is more expensive than other cleaners, but it saves greatly on labor costs and lab costs because other cleaning solutions usually require more than one cleaning, with a larger crew doing the cleaning and with costly sampling taking place in between cleanings.

Another advantage of this cleanup method, Irvine said, is that some other methods are destructive or use more corrosive substances and the resulting chemical residues are themselves toxic. Crystal Clean is rendered nonhazardous and nontoxic, requiring only a surface wipe when finished.

Sandia’s decontamination formula was developed with funding provided by the DOE and NNSA Chemical and Biological National Security Program (CBNP).

Sandia has also licensed the DF200 formula to other firms, which have developed it for use in a variety of applications, such as commercial and residential mold remediation, disinfection of hospitals and schools, pesticide removal for farm equipment and military applications, including counterterrorism preparedness. The foam also has been deployed as a preventive measure at presidential debates and a political convention.