ALBUQUERQUE, N.M. — The U.S. Department of Energy (DOE) is intensifying efforts to move technology developed at the national laboratories into the private sector to boost the economy and create jobs, says the acting director of the department’s new Office of Technology Transitions.

“Tech transfer is a mission of the DOE and all our national labs,” said Jetta Wong. “It is a complementary mission that enhances what we do to meet our security, energy and environment missions.” 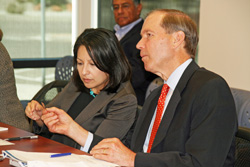 Jetta Wong of the U.S. Department of Energy’s Office of Technology Transitions  confers with U.S. Sen. Tom Udall, D-N.M., at a technology transfer roundtable in the Sandia Science & Technology Park in Albuquerque. Wong told local business owners the office is working to expand the commercial impact of national laboratory research and development. (Photo courtesy of Sandia National Laboratories) Click on the thumbnail for a high-resolution image.

The roundtable discussion included the heads of six companies — HT MicroAnalytical Inc., mPower Technology, Aquila and Abbott Medical Optics, all of Albuquerque; Flow Science Inc. of Santa Fe; and UbiQD LLC of Los Alamos — that are working to bring lab technologies to market. The Albuquerque companies said partnerships with Sandia through such programs as New Mexico Small Business Assistance (NMSBA), Entrepreneurial Separation to Transfer Technology (ESTT) and licensing were critical to their success.

Udall and Heinrich said it is important to step up tech transfer through legislation and policy. “How do we segue the great things we work on in the labs — nuclear engineering, nuclear nonproliferation, cybersecurity, nanotechnology, renewable energy, and on and on — into the marketplace?” Udall said. “We want to move forward in this crucial area. It means jobs and economic development.”

Mikulski, past chair and current vice chair of the Senate Appropriations Committee, said she is passionate about creating markets for U.S.-developed technology. “I represent great federal labs in my state, the National Institutes of Health, the Goddard Space Agency, the National Security Agency. We win Nobel Prizes but we don’t win markets,” said Mikulski, who later toured Sandia Labs with Hruby. “I want to work with our incredible assets and win markets and create jobs.”

Six researchers left Sandia this year through ESTT, setting up four companies, the highest number since 2007, Hruby said. And Sandia was selected as one of five national labs to lead implementation of DOE’s Small Business Voucher pilot, which will offer clean-energy companies technical help.

“Looking ahead, we have big plans,” she said. “Our Center for Collaboration and Commercialization concept, right here in the Science & Technology Park, will be the public face for Sandia to provide easier access and build links to the community. We care about the community we live in and care about getting our technology out for the public good.”

Wong said DOE established the Office of Technology Transitions eight months ago to expand the commercial impact of the department’s research and development portfolio. “The office is trying to make the handoff of early stage science more effective by making the department’s work with the private sector more streamlined, so they can help commercialize technologies,” she said.

The office also will oversee the Energy Technology Commercialization Fund established in the Energy Policy Act of 2005. It uses 0.9 percent of the funding for DOE’s applied energy research, development, demonstration and commercial application budget for each fiscal year, producing about $20 million annually. It provides matching funds with private partners to promote promising energy technologies for commercial purposes.

“There are lots of opportunities now to talk about how to shape the fund to be most valuable to communities and the laboratories,” she said.

The new office also will be responsible for delivering a Technology Transfer Execution Plan to Congress and reporting annually on DOE’s technology transfer and partnership activities.

“Over the past 70 years, the DOE national labs system has been an integral part of the science and technology backbone of the country,” Wong said. “DOE scientists and technicians not only focus on our missions, they play a huge role in the development of products that create economic growth. Look at solid-state lighting, vehicle battery technology, solar energy. They came from foundational science from the national labs.

“If you seed early stage science, you can do all these things that transition to the marketplace. There’s a direct connection to our local communities.”