LIVERMORE, Calif. — Sandia National Laboratories and the California Fire and Rescue Training Authority (CFRTA) this month signed a memorandum of agreement to develop new concepts and capabilities for emergency planning, exercise and response.

The agreement was signed by Marianne Walck, vice president of Sandia’s California site and the Energy & Climate program, and by Ruben Grijalva, executive director of CFRTA, which includes the Governor’s Office of Emergency Services, the Sacramento Metropolitan Fire District and the Sacramento Fire Department. 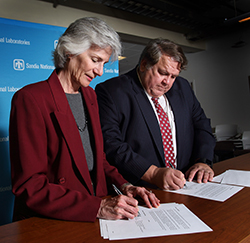 Marianne Walck, vice president of Sandia’s California site and the Energy & Climate program, and Ruben Grijalva, executive director of California Fire and Rescue Training Authority, sign a memo of agreement between the two entities. (Photo by Dino Vournas) Click on the thumbnail for a high-resolution image.

“The strong relationship between Sandia and the CFRTA is yielding a number of benefits,” Walck said. “The partnership provides Sandia with operational partners to help us transition technology to emergency managers and first responders. At the same time, the CFRTA is gaining access to technologies that can enhance preparedness across the state. This is a perfect opportunity for Sandia to deploy technology in the field to test operational concepts, evaluate readiness and refine technology requirements.”

Grijalva said the agreement between Sandia and CFRTA provides a framework of cooperation in a variety of vital areas of emergency response planning and training at the California Exercise Simulation Center (CESC) in Mather.

The CESC is an exercise and research facility operated by the CFRTA that helps prepare first responders and incident commanders by simulating catastrophic and complex emergency scenarios at low cost. The CESC serves as a satellite facility of the Federal Emergency Management Agency’s National Exercise Simulation Center network, which enhances regional preparedness. “The work provided by Sandia will help emergency responders be better prepared to respond to large-scale, human caused and natural disasters,” Grijalva said. “This new partnership will allow the CESC to be used as a testbed for Sandia-developed technologies.”

This agreement builds on a recent $50,000 grant from the state of California to Sandia to build three emergency response scenarios for the state and the CFRTA on wildfire, chlorine tanker release and radiological dispersal device. The nine-month project will begin next month.

To develop the scenarios, Sandia will link a set of models and data for California to simulate the spread of hazards from wildfires, toxic chemicals and radiation. Based on predictions of areas that could be affected, the models will estimate potential impacts on population, infrastructure and the economy. Once the basic scenario has been created, emergency managers can evaluate a wide range of possible outcomes by varying key scenario conditions, such as weather, size of a chemical spill or response options. The scenarios will help emergency managers better prepare for a broader set of incidents.