ALBUQUERQUE, N.M. — Utility companies and corporate project developers now have help assessing how much money adding an energy storage system will save them thanks to new Sandia National Laboratories software. 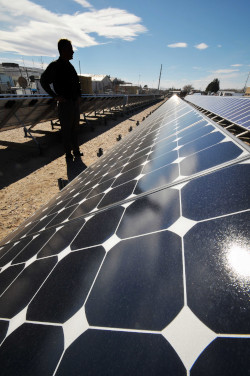 A new Sandia National Laboratories’ software application, called Quest, can help utility companies and corporate project developers assess how much money adding an energy storage system will save. Energy storage systems capture energy from renewable sources, such as solar panels, and save it for later. (Photo by Randy Montoya). Click on the thumbnail for a high-resolution image.

The software, called Quest, can also be used by energy researchers to evaluate different energy storage scenarios and model the potential of new solutions. Energy storage systems are important for capturing energy when it is produced and saving it for when it is needed.

Many renewable energy sources, such as solar panels and wind turbines, don’t produce electricity all day, every day. Energy storage systems, including lithium-ion-battery-based designs and pumped-storage hydropower, can increase the stability, reliability and resiliency of the power grid.

“We’re providing an easy-to-use, open-source software suite that people can use to do their own energy storage analysis,” said Babu Chalamala, the manager of Sandia’s energy storage research program. “They could be small utilities or co-ops, vertically integrated utility companies or a project developer who wants to use energy storage. They can take this application suite and evaluate for the needs of their particular project. Does energy storage make sense? And, if so, what is the cost-benefit analysis? Quest can help with all those things.”

Imre Gyuk, who directs the Energy Storage Program at the Department of Energy’s Office of Electricity, agrees with Chalamala.

“In our cutting-edge storage installations, we start by modeling the business case with Quest,” said Gyuk. “If the results look promising to us and our project partners, we go ahead with the venture. After completion, we monitor the system using Quest for guidance and to optimize benefits.”

The software suite currently has two principal tools: a behind-the-meter analysis tool for businesses or civil infrastructure, such as schools and hospitals and a market-analysis tool to help utility companies assess how much revenue an energy storage system would generate.

With the behind-the-meter analysis tool, business owners or city project managers can estimate how much money an energy storage system will save them when combined with solar panels or other power generators, said Tu Nguyen, a Sandia electrical engineer who led the development of the optimization algorithms underpinning Quest.

First, the consumer inputs their location and the rate structure they pay. Frequently, electric utilities charge more per kilowatt-hour during certain times of the day when demand is high. By reducing their electricity usage during peak times, energy storage provides big savings for savvy customers on their electrical bills. The consumer can also input the kind of renewable power system they have or want to install, Nguyen said.

“For example, a homeowner or a warehouse manager who knows nothing about energy storage but wants to install it for their rooftop solar panels, can use Quest’s streamlined process to learn how much money the energy storage system would save them over a year,” said Nguyen.

The market-analysis tool looks at the other side of the equation. It was designed to provide small utility companies how much revenue an energy storage system would generate by providing services to enhance the grid stability and reliability. The tool has historical data for the seven energy markets in North America, including the Electric Reliability Council of Texas and the California Independent System Operator, each with different market conditions.

To learn more about the open-source energy-storage analysis software suite, or to download Quest, visit the Quest website.

The Sandia team also provides support to help new users learn how to run the software in the form of webinars, tutorials and even developing new tools to answer different questions.

“Quest provides a very easy way to get at least a first estimate of the potential of the revenue, or cost savings, an energy storage system can generate,” said Rodrigo Trevizan, an electrical engineer on the project. His goal is to add new tools and capabilities to Quest to make it more flexible and useful.

The Quest team just began investigating the costs and benefits of adding energy storage to the New Mexico grid in comparison with transmission-infrastructure expansion to better transport power from renewable energy power plants to cities, said Nguyen. Once the new tools have been developed and tested, they will be added to Quest for any utility company or energy researcher to use.

The Sandia team is also developing new tools to tackle different grid questions, said Nguyen and Ray Byrne, the manager overseeing the development of a suite of open-source software applications. One tool will help with resilient microgrids. A selection tool will help consumers compare different kinds of energy storage technologies depending on their locations and applications. They are also working on a cost-analysis tool and a tool for comparing different battery technologies as they age.

Long term, Sandia would like to include a distribution-modeling tool to quantify how energy storage can help increase the amount of solar power the grid can safely handle before the control systems need to be upgraded, Byrne said.

Since Quest is open-source, other software developers are welcome to use the framework to develop new tools or applications to answer other energy storage questions, Nguyen added.

“Quest is a useful application suite for a lot of utilities, a kind of tool that isn’t really available commercially,” said Chalamala. “We are providing an application suite with the best foundational capabilities that can hopefully set the stage for further development in this area. If there are any other applications people need to develop, they can build off Quest to develop them.”

The development of Quest was funded by the Energy Storage Program of Department of Energy’s Office of Electricity. The Quest team is also partnering with Quanta Technology to support the development effort.