Black engineers get national awards for reaching beyond the expected

ALBUQUERQUE, N.M. – Three Sandia National Laboratories staff members who share a commitment to quality and diversity are winners of 2013 Black Engineer of the Year (BEYA) awards. 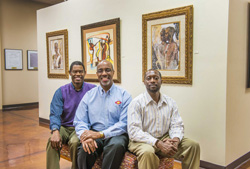 From left, Sandia’s Dennis Owens, J. Anthony Wingate and Carl Rhinehart were honored with 2013 national Black Engineer of the Year Awards. They met for this photo in the gallery of the African American Performing Arts Center & Exhibit Hall at Expo New Mexico in Albuquerque. (Photo by Randy Montoya) Click on the thumbnail for a high-resolution image.

BEYA is a program of the national Career Communications Group, an advocate for corporate diversity, and part of its Science, Technology, Engineering and Math (STEM) achievement program. The awards recognize the nation’s best and brightest engineers, scientists and technology experts. Wingate, Owens and Rhinehart received their awards at the 27th BEYA conference this month in Washington, D.C. The event preceded National Engineers Week.

“These gentlemen represent the incredible talent we have at Sandia,” said Sandia’s Chief Diversity Officer Esther Hernandez. “It is so inspiring to learn of their outstanding achievements and personal stories, and to feel their passion about growing and preparing our Sandia workforce for tomorrow.”

Wingate has received numerous awards and recognitions, but said his real reward comes from helping a minority job applicant start on the path to success. “If that person can someday be the next director, that’s what matters to me,” he said.

Sixty-four percent of new hires in Wingate’s organization in the past three years have been minorities. “I continually seek opportunities to engage with young scientists and engineers from minority backgrounds,” he said. “I believe this young, diverse talent will enhance the future of Sandia and of our nation.”

Owens joined Sandia in 2001 as a quality engineer in neutron generator production. In the 1990s, he was an early convert to the Six Sigma, ISO 9000 and quality movements. “I got into quality as a vocation because I liked the thinking. I saw the value in the prevention of defects,” he said. “The companies I worked at did not have a quality management systems model. My job became to develop the systems.”

Owens has put together internal quality audit programs at Sandia and  led Lean Six Sigma projects in launch fielding, strategic planning and lab space improvements. “Thus far, quality has been my career at Sandia,” Owens said. “Regardless of my assignment, I’ve learned to approach problem solving from a prevention mindset and it’s now just the way I think.”

Rhinehart, the first member of his family to attend college, was recruited to Sandia in 2002 from North Carolina A&T State University as a manufacturing and operations engineer in the neutron generator group. He has taken on a variety of quality engineering and project management roles. He helps with planning and managing technical activities for five departments and 45 staff members.

Mentorship and minority recruitment are integral to Rhinehart’s life. He mentors numerous staff members on quality engineering. In 2010, he began working through Sandia’s Black Leadership Committee as a recruiter of minority science and engineering job candidates.  “My objective is to open the pipeline,” he said. “It feels like I’m giving back and spreading the word about opportunities at Sandia. I want other minorities to have the opportunity I had.”

Click here for more information on diversity at Sandia Labs.