ALBUQUERQUE, N.M. — Paul Cooper, one of the world’s foremost explosives experts, retired from Sandia National Laboratories more than a decade ago but continued his labor of love, teaching a new generation of engineers everything they needed to know about blowing things up.

Cooper taught explosives safety and technology to about 1,000 people at Sandia over 35 years. He taught hundreds more at private and government facilities nationwide, including the U.S. Army’s Aberdeen Proving Ground in Maryland and Schlumberger in Houston, the world’s largest oilfield services provider. His classes always filled up and his reputation grew, both as an internationally recognized explosives engineer and as a teacher.

He taught his final class at Sandia on May 24. Students stuck around and friends stopped by to witness the end of an era. “We are very sad to see him go,” said Belinda Holley, manager of Technical and Compliance Training at Sandia. “He has had a sustained commitment not only to teaching but shaping the explosives training program. He is a rarity when it comes to that level of dedication and passion.” 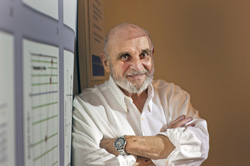 Paul Cooper built a global reputation as an explosives expert and passed his knowledge to hundreds of Sandia engineers in courses he taught for more than 35 years. “It was fun,” Cooper said. “And I’m proud of what I accomplished.” (Photo by Randy Montoya) Click on the thumbnail for a high-resolution image.

Cooper was a natural in front of a class. He taught with expertise, humor and a dash of irreverence. “If I wasn’t an engineer, I would have been a comedian or actor,” Cooper said. “I feel like a performer when I teach.”

Cooper’s classes remained popular because of the scarcity of formal explosives training in the U.S. Cooper himself learned explosives from “what I read, what I did, who I talked to, and from experience.”

He built a global reputation, searching for nuclear weapons in Iraq and investigating disasters ranging from the explosion of a gun turret on the USS Iowa in 1989 to the crash of TWA Flight 800 over New York in 1996.

Cooper described his career with typical humility. “Along the way, wonderful things happened,” he said. “I was just in the right place at the right time.”

Cooper, a chemical engineering graduate of the Brooklyn Polytechnic Institute, joined Sandia in 1964 after working in explosives at the Illinois Institute of Technology’s Armor Research Foundation. “I was like a little kid at IIT. Here was a place where they pay you to go out and blow stuff up,” he said. “That’s how I officially got into the explosives business.”

He worked in explosive components at Sandia until 1977 when he was recruited by the labs’ Underground Nuclear Testing arming and firing group, where he stayed until he retired in January 1997. His work focused on the design of explosive systems.

In 1979, Cooper joined the national Nuclear Emergency Search Team, NEST, an atomic bomb squad of sorts. “If the FBI or somebody got a lead there was a clandestine or homemade atom bomb somewhere, NEST had to locate and disarm it,” Cooper said. “It was very exciting.” Cooper was a NEST member until the mid-1990s.

The USS Iowa gun turret exploded on April 19, 1989, in the Atlantic Ocean, killing 47 crewmen. A Navy investigation concluded a suicidal crew member who died in the blast deliberately caused it. Members of Congress criticized the investigation, and Sandia was asked to review the findings.

The Labs put together a dream team of about two dozen engineers including Cooper. It found evidence that propellants were pushed into the 16-inch gun barrel too fast and too far, hitting the base of the 2,700-pound projectile instead of stopping a foot away as required, setting off an explosion. 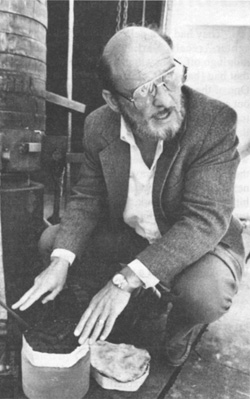 Paul Cooper, in a 1990 photo published in the Sandia Lab News on the USS Iowa investigation, explains the half-scale test apparatus used for impact-ignition experiments. (Photo courtesy Sandia National Laboratories) Click on the thumbnail for a high-resolution image.

The Sandia report was delivered in dramatic testimony before the Senate Armed Services Committee. Cooper was among those testifying. The Navy reopened the investigation after Sandia concluded the explosion was likely caused by an accidental overram of powder bags into the gun’s breech. The Navy said the cause of the explosion could not be determined and closed the investigation, but withdrew accusations against the dead crew member.

In October 1991, following Operation Desert Storm, Cooper was named to a United Nations/International Atomic Energy Agency inspection team sent to Iraq to look for evidence of weapons of mass destruction. “In early October, the Iraqis denied having a nuclear program,” Cooper said. “When we left at the end of October, they declared officially they had a nuclear program. It was a pivotal team and a critical turning point.”

A year and a half later, the Branch Davidian compound in Waco, Texas, burned down at the end of a 51-day siege involving the U.S. Bureau of Alcohol, Tobacco and Firearms, the FBI, and sect leader David Koresh. Seventy-five people died in the fire, including Koresh. Cooper was named to a presidential commission that investigated ATF and FBI actions after surviving Branch Davidians alleged the FBI started the fire.

“We determined that the Davidians were making explosive devices and set the fire in bales of hay,” Cooper said. “The ATF and FBI acted legally and within normal procedures.”

Cooper also was called upon by the state of Oklahoma to look at technical evidence in the trials of Timothy McVeigh and Terry Nichols in the April 19, 1995, bombing of the federal building in downtown Oklahoma City that killed 168 people.

“It was two years after the actual bombing, so I went through tons of files and studied photos of broken windows, overturned cars and the crater. Those are passive pressure gauges that give insight into the explosives,” Cooper said. “I was able to closely match the amount of explosive material McVeigh and Nichols had bought in Kansas and Texas with the damage. That calculation had not previously been done and was used in the state trial.”

Cooper helped investigate the July 1996 explosion of TWA Flight 800 over Long Island, N.Y., that killed all 230 people on board. The complex, four-year inquiry concluded the probable cause of the accident was an explosion of flammable fuel and air vapors in a fuel tank, most likely due to a short circuit.

“When I got there, the plane’s pieces were being reassembled and I could walk through the fuel tank,” Cooper said. “I looked around and could see where it started and where it detonated.” His calculations became part of the final report.

He did other accident and criminal investigative work for outside agencies, particularly the FBI. He said his field experience improved his explosives classes at Sandia, and teaching made him a better engineer. “The more I talked the more I learned,” he said. “What I learned in setting up and doing those classes I applied to my work, which got better and better.”

Cooper’s class notes turned into a book, “Explosives Engineering,” begun in 1982 and published in 1996. It remains the definitive text on explosives, used in university and industrial engineering programs worldwide.

“We owe a great debt of gratitude to individuals like Paul Cooper who not only excel in their chosen professional field but also put forward the time and effort to pass along their skills and knowledge to others who will follow in their footsteps,” said David Keese, director of Sandia’s Integrated Military Systems Center.