Sandia National Laboratories researcher Mark Tucker demonstrates the labs’ decontamination formula. The product, used 10 years ago to disinfect following the deadly 2001 anthrax attacks, is now being used by a variety of companies to clean meth labs and other toxic sites. (Photo by Randy Montoya) Click on the thumbnail for a high-resolution image.

The national awards recognize employees of FLC member laboratories and non-laboratory staff who did outstanding work while transferring federally developed technology. Judging of the nominations is done by a panel of experts from industry, state and local government, academia and the federal laboratory system.

Thayer’s award, one of the FLC’s highest honors, recognizes one person who demonstrated outstanding achievement in tech transfer significantly over and above what was called for in the normal course of work.

“Sandia is truly honored to be recognized by our peers for our work in technology transfer,” said Jackie Kerby Moore, Sandia’s manager of Technology and Economic Development and the labs’ representative to the FLC. “Congratulations to Bianca and the Sandia teams who are being acknowledged for their accomplishments.”

A passion for tech transfer

Thayer started her Sandia career five years ago as a licensing executive in Albuquerque after working 30 years in industry. She has negotiated industry and academic partnerships and transferred a wide range of lab technologies through licensing, cooperative research and development and other agreements.

Among Thayer’s successes was negotiating the patent license in 2012 with UOP Honeywell for crystalline silico-titanates used to remove radioactive cesium from contaminated seawater following the Fukushima nuclear power plant disaster in Japan. She also negotiated numerous new licenses for Sandia’s decontamination technology resulting in more widespread use of the product. 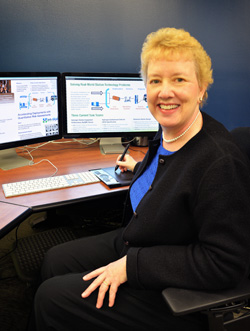 Her manager Carrie Burchard said Bianca, who moved to Sandia’s California lab in 2013, “is constantly thinking of new ways to help her licensees be successful in commercializing technologies from Sandia. She’s got a true passion for technology transfer.”

Decontamination Technology for Chemical and Biological Agents, which also won a Far West/Mid-Continent regional FLC award last year, uses a mix of mild, nontoxic and noncorrosive chemicals found in common household products such as hair conditioner and toothpaste. It contains surfactants that lift agents off a surface and mild oxidizers that break down the agent’s molecules into nontoxic pieces that can be washed down a household drain like detergent or dish soap.

The product works quickly and kills 99.99999 percent of bacteria, viruses and fungi. Originally used by the military and first responders, Sandia has licensed the formula to several companies that have further developed it to battle toxic mold and decontaminate meth labs, disinfect healthcare facilities and schools, remove pesticides from farm equipment and agricultural packing plants and fight the spread of the Ebola virus in Africa.

Sandia has promoted the technology, worked with companies to license and commercialize it and adapted it for new products and uses. Efforts continue to discover applications that could lead to more products and to add more licensees.

The decontamination formula was developed with funding from the U.S. Department of Energy and the National Nuclear Security Administration (NNSA) Chemical and Biological National Security Program. And Sandia’s Laboratory Directed Research and Development (LDRD) program has supported a variety of projects involving decontamination systems.

A standard in the bomb disposal field

X-Ray Toolkit (XTK) is a software program developed by Sandia for the federal government with funding from NNSA and the Technical Support Working Group of the Department of Defense Combating Terrorism Technical Support Office. The image processing and analysis software helps emergency responders perform effectively in the high-stress, time-critical act of disabling IEDs.

It has become a field standard due to its ease of use and the fact that it was custom built for use by explosive ordnance disposal (EOD) personnel. A unique multifaceted deployment model contributed to its rapid and widespread acceptance. 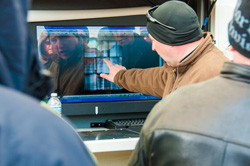 Explosive ordnance disposal technicians use Sandia National Laboratories’ XTK software to help analyze and disable an improvised explosive device. XTK is estimated to be used by more than 20,000 people in many of the 467 recognized non-military bomb squads across the country. (Photo by Jeff Hoffman/Honeywell) Click on the thumbnail for a high-resolution image.

XTK is an alternative to multiple-imaging software packages used with X-ray scanners. Sandia developers spent hundreds of hours with EOD teams learning how they work and what they need, and designed an application that is intuitive, versatile, compatible with most X-ray scanners and well suited to the needs of bomb disposal technicians.

Sandia also designed the patented Grid-Aim system as an optional hardware accessory kit for XTK. Grid-Aim lets users precisely disrupt and disable the internal components of an IED with minimal damage to surrounding property and infrastructure, while at the same time preserving the rest of the device for evidence.

To get XTK to the people who need it, Sandia offered scanner manufacturers no-cost end user licenses and free test and evaluation licenses. Creative tech transfer methods helped XTK spread through the emergency response community so rapidly that it is now estimated to be in the hands of more than 20,000 users in many of the 467 recognized non-military bomb squads across the U.S. It also has been adopted by the FBI’s Hazardous Devices School for all its courses.

The FLC is a nationwide network of about 300 members that serves as a hub to develop strategies and opportunities for linking laboratory mission technologies and expertise with the marketplace.

The FLC Awards Program annually recognizes federal laboratories and their industry partners for outstanding tech transfer efforts and has become one of the most prestigious honors in technology transfer. Since its establishment in 1984, the FLC has presented awards to more than 200 federal laboratories.