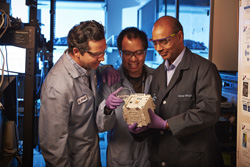 From left, Sandia National Laboratories’ Matt Piccini, Chung-Yan Koh and Anup Singh lead the SpinDx team. SpinDx is a diagnostic tool with medical and non-medical applications. (Photo by Jeff McMillan) Click on the thumbnail for a high-resolution image.

“It’s quite an honor to receive recognition for our technology development and technology transfer work,” said Jackie Kerby Moore, Sandia’s manager of Technology and Economic Development and representative to the FLC. “It’s especially gratifying when we are recognized alongside our partners.”

SpinDx is a lab-on-a-disk, medical diagnostic tool that can determine a patient’s white blood cell count, analyze important protein markers and process up to 64 assays from a single sample, all in a matter of minutes.

“In a doctor’s office, time is money,” said Anup Singh, senior manager of Biological Science and Technology at Sandia. “Patients have become accustomed to an initial visit, some tests, samples that are sent off to a far-away lab, a wait of a week or more for results, more tests and charges every step of the way. With SpinDx, you can see results before you even leave the office.”

SpinDx has both medical and non-medical applications, ranging from detection of markers of infectious diseases to food and water safety testing. The first license for SpinDx technology was signed in December 2012, the second in March 2013, and three more are being negotiated. Sandia researchers Chung-Yan Koh and Matthew Piccini also worked on the technology.

The Sandia Cooler reduces the energy needed to cool processor chips in data centers and large-scale computing environments, said Sandia researcher Jeff Koplow. The technology has the potential to decrease overall electrical power consumption in the U.S. by more than 7 percent. 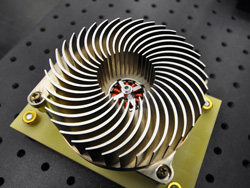 The Sandia Cooler reduces the energy needed to cool processor chips in data centers, and could cut electrical power consumption in the U.S. by 7 percent. (Photo by Dino Vournas) Click on the thumbnail for a high-resolution image.

The Sandia Cooler takes heat from a conventional CPU cooler and efficiently transfers it across a narrow air gap from a stationary base to a rotating finned structure. Among other benefits, the Sandia Cooler architecture eliminates all the main drawbacks of conventional air-cooled heat exchanger technology. The technology also is very practical from the standpoint of cost, complexity and durability.

The cooler offers benefits in other applications where thermal management and energy efficiency are important, particularly heating, ventilation and air-conditioning. It won an R&D 100 Award in 2012. One license has been issued and about a dozen companies are interested in the technology. Prototypes are being developed for the interested parties.

Evaporation of the solvents induces the polymers to self-assemble into multifunctional nanoparticles, as well as films with tailored optical properties and a nanostructured surface. Because the process is compatible with conventional spray processing, it can be applied directly to the coating of large or complex parts, which is difficult for current commercial methods.

The work, which won an R&D 100 Award in 2010, was led by Hongyou Fan. Also participating were researchers from UNM. The technology has been awarded three patents.

Protocell research is a joint effort of Sandia and UNM HSC, which includes the UNM School of Medicine, the UNM Cancer Research and Treatment Center, the College of Pharmacy, the Center for Infectious Disease and Immunity and various UNM hospitals. A protocell is a novel nanoparticle delivery vehicle that can dramatically improve the efficiency of chemotherapy drugs, antibiotics and vaccines while reducing side effects. Protocells have been shown in in vitro models to improve upon existing nanoparticle-based drug delivery by a millionfold.

Development of the protocell combined the knowledge of UNM in biomedical, cancer, engineering and infectious disease research with Sandia’s expertise in materials science and nanotechnology. Sandia and UNM have been working together to promote technology transfer since their first joint technology was licensed in 1993.

The Sandia-UNM collaboration, led from Sandia by Jeffrey Brinker, Carlee Ashley and  Eric Carnes, has worked the past six years to develop the protocell technology and test its efficacy in in vitro and in vivo cancer models, including leukemia and cancers of the ovary and liver.

In cargo research, Sandia has partnered with SSC and DHS to develop, test, evaluate and transition new security technologies to meet specific DHS and U.S. Navy needs. Since 2001, DHS has been required to secure the storage and transportation of cargo entering and traveling through the United States against terrorist attack, introduction of contraband cargo and pilferage. The Navy must ensure the security of high-value cargo, such as munitions, that it stores and transports around the world 24 hours a day.

John Dillinger and Steve Morrison worked on the project for Sandia.

“We are thrilled to have won these five awards, and especially the two partnership awards,” Kerby Moore said. “Partnerships with academia, government and industry are crucial to Sandia’s efforts to deploy technology for the public good.”

The FLC is a nationwide network of more than 300 members that provides a forum to develop strategies and opportunities for linking laboratory mission technologies and expertise with the marketplace.