ALBUQUERQUE, N.M. — Keilan Jackson wanted real-world experience when he shopped for an internship for the summer of 2013. The Arizona State University computer science junior had completed other intern stints where his work was never put to use.

From several options, he chose Sandia National Laboratories’ Technical Internships to Advance National Security, or TITANS, program, which offered him exposure to a practical national security challenge, one that was grounded in detecting nuclear detonations.

“It’s been amazing,” he said. “The importance of the work is what’s different for me. It’s interesting and not trivial. What I’m doing at Sandia will be carried on and used.” 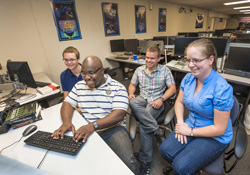 Jackson and other TITANS interns are setting up a proof-of-concept system for seismic data monitoring using Sandia-developed research and various software technologies. “We communicate continuously about what we’re doing and what needs to be done,” Jackson said. “We work in an open, unclassified space and are able to help each other out.”

TITANS was launched in the summer of 2012 as an umbrella program over three Sandia internship institutes: the Center for Analysis Systems and Applications (CASA), the Center for Cyber Defenders (CCD) and the Monitoring Systems and Technology Intern Center (MSTIC).

“We created TITANS to take our internship experience to the next level,” said Marcus Chang, manager of Sandia’s Next Generation Monitoring Systems and of the CASA program in TITANS. “We put a lot of effort into making it as fulfilling, interesting and fun as possible.”

TITANS interns are exposed to all three institutes, and work in a wide range of technical fields dominated by computer science and engineering and by electrical and mechanical engineering.

They have open workspaces where collaboration is encouraged. Each student has a Sandia staff mentor, and the program offers tours of key facilities and social gatherings. “They can ask questions and build networks and relationships with peers,” Chang said. “With a larger population of interns it’s a more enjoyable and valuable experience.”

The program is designed to bring top-notch employees to Sandia. “The interns are exposed to what it is like to work at Sandia and what the national security challenges are facing the nation,” Chang said. “It allows them to understand why Sandia is such a unique place to work. The work is complex and meaningful.”

About a dozen TITANS interns have been hired so far as full-time employees or into the Critical Skills Master’s Program (CSMP), under which they are paid to earn a master’s degree as employees of the labs.

Lori Belcher, program coordinator in MSTC, said TITANS benefits Sandia in many ways. “We learn a lot from our interns,” she said. “When a new generation comes in, they bring a wealth of knowledge and a new culture to the labs. They bring fresh eyes and different toolsets to the challenges.”

Most interns spend a summer at Sandia, and many re-apply to come back the following summer. About a dozen are year-round, either from the University of New Mexico or New Mexico Tech, or they telecommute. Typically, more than 500 students apply for the TITANS positions each year.

Chang said the interns’ assignments are set up in advance so they hit the ground running, working alongside Sandia technical staff. “It’s a unique environment,” said CASA mentor Ben Hamlet. “We want to give our interns real experience to allow them to know if it’s an area they want to work in long term.”

Jackson joined CASA in early May on a project to create a seismic event monitoring pipeline using special computer architecture. Raw seismic data from earthquakes, explosions and other events comes into the processing pipeline from stations around the world. Jackson and colleagues are building a software framework to interpret the data through event detection, location and association.

Cedric Carter came to the CCD as a cybersecurity intern from North Carolina A&T State University, working on a secure computer system. “The cyber labs at Sandia are among the biggest in the country, and that attracted me,” he said. “We’re changing the paradigm for computer systems to make them more secure and resilient to malware.

“We’re making a difference to national security. We do real-world, cutting-edge research. The collaboration is amazing. I’m a strong believer that collaboration promotes productivity.”

Keith LeGrand, an aerospace engineering major from the Missouri University of Science and Technology, spent the summer at Sandia and is applying to master’s program while finishing his senior year. He is a year-round TITANS intern in the MSTIC program, helping design a power module that will be on board a Global Positioning System (GPS) satellite.

“I’m really interested in research and development, being on the edge and exploring new things,” LeGrand said. “You see the R&D 100 awards, and Sandia is always there. I wanted to be a part of that.”

Year-round intern Regina Eckert, an Albuquerque native and junior in electrical engineering at the University of New Mexico, works in MSTIC on ground-based seismic monitoring. She said she appreciates the educational opportunities offered by Sandia. “There are a lot of really nice advantages to working here,” she said. “And the national security mission is important.”

More information about the TITANS program, including current job openings, is available here.

Click here for information on other Sandia internship programs.