Back to the drawing board: Reinventing offshore wind turbines 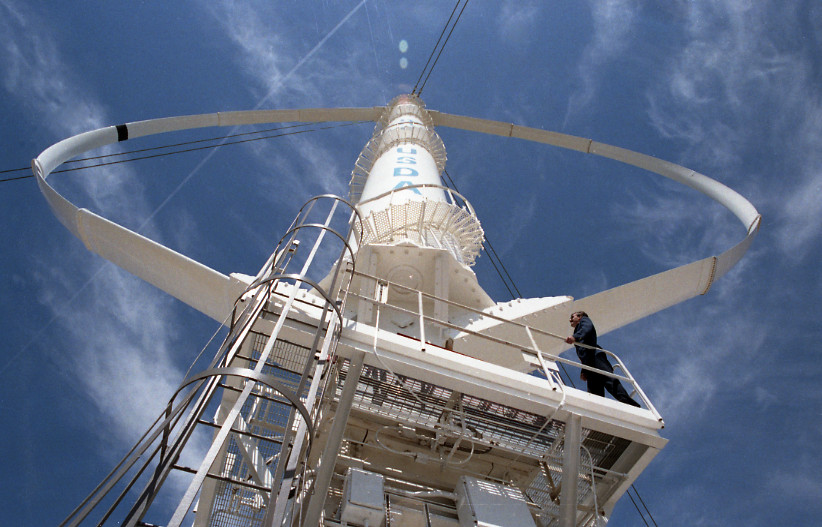 ALBUQUERQUE, N.M. — Brandon Ennis, Sandia National Laboratories’ offshore wind technical lead, had a radically new idea for offshore wind turbines: instead of a tall, unwieldy tower with blades at the top, he imagined a towerless turbine with blades pulled taut like a bow. 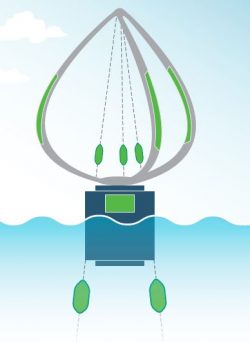 This design would allow the massive generator that creates electricity from spinning blades to be placed closer to the water, instead of on the top of a tower 500 feet above. This makes the turbine less top-heavy and reduces the size and cost of the floating platform needed to keep it afloat. Sandia filed a patent application for the design in 2020.

However, before he could set his idea in motion, the team needed to build software capable of modeling the response of the turbine and floating platform to different wind and sea conditions to determine the optimal design of the whole system.

Now, the Sandia team have a functional design tool, or “drawing board,” and can start designing and optimizing their lighter floating wind turbine system.

“To design our floating wind turbine system, we needed a design tool that can simulate the wind, waves, blade elasticity, platform motion and the controllers,” Ennis said. “There are a few tools that can do some of what we need but without all of the pertinent two-way coupled dynamics for design and optimization of this kind of wind turbine. It was a big undertaking, but it was essential. There can’t be a floating, vertical-axis wind turbine industry without a trusted tool like this.”

Much of the U.S.’s offshore wind blows across water more than 200-feet deep. At those depths, it would be very expensive to build the rigid support structures typically used by wind turbines. However, wind turbines that can float above the sea floor could play an important role in diversifying our sources of renewable energy and improving the stability of the grid as cities and states move closer to achieving their net-zero emission goals, said Ryan Coe, a mechanical engineer in Sandia’s water power group.

“The high electrical demand on the coasts is one reason why offshore wind looks attractive; people tend to live away from where the onshore wind is the strongest and there’s not enough space in cities for solar panels,” Coe said. “Also, offshore wind provides power at different times of the day than solar and onshore wind.” 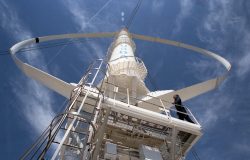 However, floating offshore wind does come with its own challenges, Ennis added. Chiefly, it is very expensive to support the wind turbines and to maintain them when they’re out at sea. The goal of one Department of Energy Advanced Research Project Agency-Energy program is to optimize the design of floating wind turbines, platforms and control systems to maximize power output while minimizing costs, he said.

“For us the question becomes how do we remove mass and cost from the system while maximizing energy capture, which is where we got our innovative, towerless, vertical-axis design,” Ennis said.

Most wind turbines today are based around a tall tower with three blades turning a horizontal shaft that cranks a generator behind the blades in the turbine’s nacelle, the box at the top of the turbine that contains the rotor and other important components. But that’s not the only way to design a wind turbine, Ennis said. Some turbines have two or more blades supported by a vertical shaft with a generator below the blades. This design, called a Darrieus vertical-axis wind turbine, has a lower center of gravity and can weigh less than a traditional wind turbine, Ennis said, but one of its main challenges is that it’s difficult to protect the turbine from extreme winds.

For traditional, horizontal-axis wind turbines, the blades can rotate away from intense, damaging winds, but the Darrieus design catches the wind from every direction. The Sandia design replaces the central vertical tower with taut guy wires, Ennis said. These wires can be shortened or lengthened to adjust for changing wind conditions to maximize energy capture while controlling strain. Additionally, replacing the shaft with wires reduces the weight of the turbine even more, allowing the floating platform to be even smaller and less expensive.

Development and validation of design tool 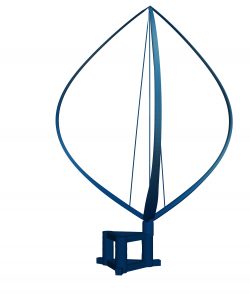 An image of an analysis of Sandia National Laboratories’ innovative floating vertical-axis wind turbine by the team’s new design tool. (Image by Kevin Moore) Click on the thumbnail for a high-resolution image.

Kevin Moore, a mechanical engineer in Sandia’s wind power group, and the rest of the team built upon earlier work of Sandia engineer Brian Owens to develop the vertical-axis wind turbine design tool. Coe and Michael Devin, another mechanical engineer in the wind power group, also worked on it. The team worked on integrating physics algorithms while also improving the accuracy and speed of the algorithms.

Moore also led the efforts to validate the design tool using data from a land-based, 34-meter-diameter, vertical-axis wind turbine built by Sandia in the ‘80s.

“While working on the validation effort, it has been amazing to see the design quality and innovation of the legacy designers,” Moore said. “It is a privilege to stand on the shoulders of giants while leveraging modern computational resources.”

One of the reasons why the Sandia team is validating the design tool is so that it can eventually be used to certify vertical-axis wind turbine designs to the pertinent design standards, Ennis said.

“Right now, if a company wants to certify a vertical-axis wind turbine, there’s not a trusted design tool so there’s a lot of uncertainty in that process,” Ennis said. “For us to be able to provide a trusted design tool means that the certification bodies would be more willing to approve vertical-axis wind turbine designs, which is necessary for financing and their ultimate deployment.”

Spinning up an optimized turbine design

“We’re designing the entire system, the turbine and platform and their control, concurrently to reduce the levelized cost of energy, not just the cost of the turbine itself,” Ennis said. “Normally one company will design the turbine, another company designs the floating platform for that fixed turbine design, and then a third company installs that with other systems to make an offshore wind plant; and you get what you get in the end in terms of cost.”

The team hopes to have an optimized floating, vertical-axis wind turbine system design by the end of the year, Ennis said, but the project would not have been possible without their new specialized software.

“This is a neat tool in terms of the way that it integrates all of these different capabilities,” Coe said. “We were able to link tools developed for modeling the aerodynamics and structural dynamics of vertical-axis wind turbines — areas that Sandia has always been a leader in — and combine it with hydrodynamics and make it more suited for design optimization.”

Development of the offshore wind turbine design software and future work optimizing the design of the whole system is supported by the Department of Energy’s Advanced Research Project Agency-Energy’s ATLANTIS program. The Sandia team is working with project partners FPS Engineering & Technology and the American Bureau of Shipping on the project.