ALBUQUERQUE, N.M. — Fog can play a key role in cloaking military invasions and retreats and the actions of intruders. That’s why physical security experts seek to overcome fog, but it’s difficult to field test security cameras, sensors or other equipment in fog that is often either too thick or too ephemeral.

Until now, collecting field test data in foggy environments was time-consuming and costly. “Fog is difficult to work with because it rarely shows up when needed, it never seems to stay around long enough once you’re ready to test and its density can vary during testing,” said Rich Contreras, a systems engineer at Sandia National Laboratories. 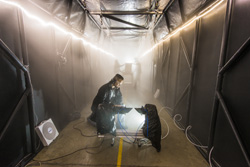 Sandia National Laboratories developed a fog chamber to test optics, like security camera sensors, in a controlled environment. Sandia chemical engineer Andres Sanchez checks an instrument that measures the particle size and concentration of the fog in the chamber’s atmosphere. (Photo by Randy Montoya) Click on the thumbnail for a high-resolution image.

That’s why Contreras and others started thinking about developing a controlled-fog environment for sensor testing. The sunny, high desert of New Mexico may seem an unlikely place to make fog, but Sandia has developed a fog chamber — one of the world’s largest — that meets the needs of the military, other government agencies and industry. The chamber is in a tunnel owned by the Air Force Research Laboratory.

“The ultimate goal of this whole endeavor is to defeat fog,” Contreras said. “From physical security and force protection aspects, as scientists and engineers who care about national security, we want to be able to make it so that a security force person at a site has the ability to maintain uninterrupted situational awareness.”

Researchers say the chamber will help develop and validate cameras’ and sensors’ abilities to penetrate fog, knowledge that could lead to improved surveillance at sites. The chamber also could be used to answer fundamental optics questions, which in time could lead to improved security camera lenses and medical imaging equipment, safer aircraft landings and better vision for drivers in fog.

“People need to see through fog,” said optical scientist Gabe Birch. “So much of the U.S. population is on the coastlines in places where fog exists. If you could discover an inexpensive technique to see better through it, there are a lot of people in industry who would be interested in that.”

This is not your Halloween party fog machine. Sandia’s fog chamber is 180 feet long, 10 feet tall and 11 feet wide. The chamber is enclosed by air curtains and rubber baffles to entrap the fog, approximating real-world conditions. Tunnel walls are painted with a special black paint to reduce reflection and improve data quality, Contreras said.

Walk a few steps down the hallway when the chamber’s fog is at full strength and a sense of disorientation washes over an observer as the walls, ceiling and entranceway disappear and people only a few feet away fade first into dark, obscure silhouettes and then become invisible.

Sandia researchers use cloud microphysics to generate fog for video analytics, environmental testing and new sensor development. Currently, the chamber’s fog resembles that found in coastal regions, but output can be customized to produce fog physically similar to that found in any location, said Crystal Glen, an aerosol scientist. Researchers eventually hope to add smoke and dust to the chamber’s repertoire.

In the atmosphere, fog forms from a seed particle, such as pollen or sea salt, surrounded by layers of water. Seed particles differ based on the fog’s location. Sandia currently uses sodium chloride, or sea salt, as its seed particle to mimic the composition and particle size of coastal fog. By consulting journals or traveling to a region, researchers can measure the droplet size distribution and chemical composition of different fogs worldwide and then alter the seed particles to customize the fog.

The longer the fog’s seed particles hold onto the water layer, the longer they are visible for testing. The length of the test depends on the relative humidity in the chamber.

Glen mixes a solution of sodium chloride and water that produces the desired core particle seed diameter. The solution is sprayed into the chamber where the relative humidity is above 95 percent. The initial sprayed droplets are roughly 2.3 times their dry diameter.

The deliquescence point, or the amount of relative humidity required for a particle to take on water, happens at 72 percent relative humidity for coastal fog, primarily composed of sodium chloride. The amount of water clinging to the seed particle grows exponentially from there. This process happens naturally in the atmosphere and leads to fog and cloud formation, Glen said.

To speed up Mother Nature, Glen checks the rate at which a particle will gain or lose water in relation to the chamber’s relative humidity, termed the hysteresis curve for water interactions with sodium chloride. This information allows the team to target a specific relative humidity and obtain a desirable size for the wet particles, so the droplet size distribution is close to what is found in natural fog, she said. While the fog generated in the chamber is not identical to fog formed in nature, it is physically representative and extremely useful for research involving optical transmission and visibility.

Typically, gravity causes the fog to settle before the decrease in relative humidity takes effect. The fog density can remain constant for up to 30 minutes, allowing a test to last 10-20 minutes. Adding a 30-second blast of fog particles can prolong the testing, Glen said, adding that the fog’s density can be controlled by the amount sprayed into the chamber or the particle size.

The layer of water around the fog seed particles either absorbs the photons, the elementary particles and waves that make up light, or causes them to change direction in random ways, so that by the time they reach the cameras being tested, the wavelengths being picked up create a fuzzy image, Birch said.

Optics researchers refer to fog and seeing through bodily tissue in medical imaging as “scattering environments.” Sandia optical engineer David Scrymgeour likens the photons’ movements in these environments to walking through a sunny, full parking lot and seeing glints of light bounce in every direction off windshields.

In fog, it’s the scattering of the photons that causes the car headlights or a pedestrian’s flashlight beam to illuminate an entire scene, making vision even more difficult, Scrymgeour explained.

In physical security, “the cameras are very sensitive to the sizes of fog particles and how the photons scatter. That’s why it’s so important to know the sizes of particles that we have in the environment, which is something that we in the optical field have not really had before,” Birch said. “It enables a lot of very interesting testing because you can finally characterize your system’s performance by knowing the scattering that’s happening in the environment.”

For the military or any agency seeking to physically secure a site, not knowing the exact ranges that cameras can penetrate fog in a particular environment makes it difficult to choose the correct cameras and sensors and their placements, Contreras said.

Birch explained: “It’s very difficult to quantitatively compare all those modalities together with the same fog and in the same conditions because you go outside and five minutes later it could be very different.”

Once the chamber’s fog density is set, cameras or sensors mounted at one end of the tunnel are monitored to see how well they detect humans or custom targets, Contreras said.

Different types of lighting representing specific sites could be installed in the chamber to see the combined effect of fog and lighting or the desired time of day, he said.

Examples of tests include showing raw data from various cameras, characterizing how different wavelengths and polarization states are influenced by fog, comparing different optical systems in a controlled foggy environment and resolution testing to see how the optical properties and resolution degrade in a variety of foggy environments, Birch said. Polarization states describe the way electromagnetic waves oscillate as they propagate in space.

The fog chamber also could be used to answer fundamental scientific questions.

“When you look at the huge gap from the visible spectrum all the way up to the far infrared, no one can say we absolutely understand how the polarization states at all these different wavelengths behave as they go through a foggy atmosphere,” Birch said.

Recent research at Sandia has suggested that the polarization of photons could be exploited to see better through fog or other scattering environments, Scrymgeour said.

Researchers have ideas about how to use optics — for example, a filter on a camera lens — to exploit polarization, he added, but they need to be tested in a real-world environment, like the fog chamber.

Such testing could inform not only physical security camera design to better handle fog, but also medical imaging, he said, “The physics in scattering events are the same.”