ALBUQUERQUE, N.M. — In a collaboration almost as old as technology transfer itself, Sandia National Laboratories and The Goodyear Tire & Rubber Company have worked together for 25 years to create better vehicle tires and more advanced computational mechanics. 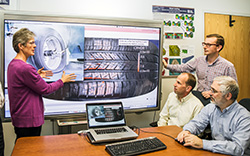 Sandia National Laboratories computer scientists Vicki Porter, left, and Byron Hanks, second from left, and Antonio Recuero, second from right, and Mohammed Sobhanie of The Goodyear Tire & Rubber Company study images of tire technology during a recent session at Sandia. (Photo by Jennifer Knight) Click on the thumbnail for a high-resolution image.

“You might wonder how national defense systems relate to tire engineering,” said Susan Seestrom, Sandia’s chief research officer. “But a tire is a complex system – one of the most formidable challenges in computational mechanics – and that’s something Sandia knows well.”

The joint work allows Sandia to enhance its software toolkits and improve its capabilities for mission applications while simultaneously addressing Goodyear’s proprietary challenges.

“It is remarkably complicated to model and simulate tire performance, let alone under varying temperature, pressure and wear conditions,” said Chris Helsel, Goodyear’s chief technology officer. “Our computational work with Sandia is a continuous source of competitive advantage for Goodyear, helping us design and deliver high-performance products and services in a digital economy.”

Ted Blacker, Sandia’s manager of Simulation Modeling Sciences, said the partnership has been successful because it is strategic. “We focus on strategic technical challenges where advanced technology from both sides can change the future,” he said. “Almost without fail, the new capabilities they commission us to develop, for example, to model rotating, twisting and deforming tires, help us with simulations in our national security work.” 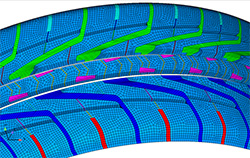 This simulation shows the detailed tread mesh of a tire. (Image courtesy of The Goodyear Tire & Rubber Company) Click on the thumbnail for a high-resolution image.

Sandia and Goodyear signed a Cooperative Research and Development Agreement, or CRADA, in 1993, back when technology transfer from the national labs was in its nascent stage. In 1980, the Stevenson-Wydler Technology Innovation Act was signed into law by President Jimmy Carter, becoming the first major U.S. technology transfer legislation. It required federal laboratories to actively participate in and budget for technology transfer activities.

Stevenson-Wydler was followed by the Federal Technology Act of 1986, the second major piece of legislation focused on tech transfer from federal government agencies to the private sector. It established the Federal Laboratory Consortium and let federal labs enter into CRADAs with private industry.

“Tech transfer was an exciting new opportunity for the labs,” said Mary Monson, senior manager of Technology Partnerships at Sandia. “The Department of Energy really embraced the tech transfer concept for federal agencies in the late 1980s and early 1990s. Part of the defense programs budget was put aside for U.S. economic security for the nation as well as enhancing the capabilities of the labs through solving complex real-world problems. Labs identified their capabilities and were authorized to collaborate with partners.”

Goodyear took note, reaching out to Sandia in 1992, and the two organizations forged a relationship through back-and-forth visits to each other’s sites. 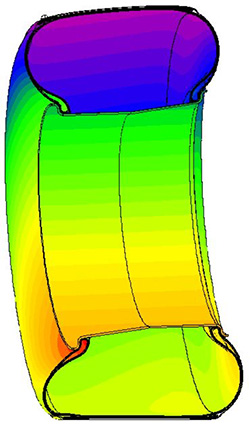 Nascar cornering design is shown in this tire simulation. (Image courtesy of The Goodyear Tire & Rubber Company) Click on the thumbnail for a high-resolution image.

“They looked at our advanced computational mechanics software developed for nuclear weapons programs after the government halted underground testing and saw that they could be applied to tires. Instead of building and testing three to five prototypes before a tire was ready for manufacture, they could use our computer codes to develop one,” Monson said. “Time to market a new design was dramatically reduced, by half or more.”

Sandia’s tools went to work on the many components of a tire system. “Modeling the pneumatic tire for performance and handling predictions was a challenge in several computational mechanics areas, including composites modeling, contact mechanics and rubber material behavior,” said Sandia technical lead Martin Heinstein. “The mechanics and solvability challenges aligned well with Sandia’s need to develop code for large-scale, massively parallel platforms.”

An early victory for the collaboration was the Assurance TripleTred, a unique all-weather tire with a three-part tread compound. Goodyear wanted a visually distinctive tire that would generate buzz and demonstrate its best technology. The Assurance line was launched in 2004, and in 2005 Sandia and Goodyear won a joint R&D 100 Award for the tires, particularly the TripleTred, which was brought from concept to market in less than a year. Goodyear said the tire could not have been produced without modeling and predictive testing tools developed with Sandia.

“Our relationship with Sandia has been very beneficial in our competitive success in the global automotive industry, allowing us to begin submitting ‘virtual tires’ to automakers that can be incorporated into their vehicle models early in the development process as they tune the vehicle designs,” Moseley said. 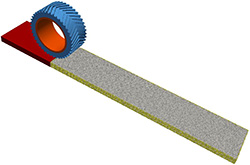 A snow tire’s performance is detailed in this simulation. (Image courtesy of The Goodyear Tire & Rubber Company) Click on the thumbnail for a high-resolution image.

“So many good things have come out of this enduring partnership,” Monson said. “It has worked both ways. We were able to apply our codes to a real-world problem, and improve our codes. And Goodyear was able to develop revolutionary products.”

The work with Goodyear led to a deeper appreciation at Sandia of the value of computer modeling in the early stages of development.

“We showed that modeling and simulation made a difference in developing better products faster,” Blacker said. “Our computational tools typically were used late in the process to understand why something broke and how to fix it. Now we use modeling more in the up-front stages, such as in the early design, to reduce testing.”

Monson said CRADAs are an important technology transfer tool. “They help us sustain and improve our capabilities because we’re applying our technology to a company’s pressing problems,” she said. “There’s an urgency. It’s not abstract.”

She said the Goodyear CRADA has allowed Sandia researchers to work with peers in industry and share best practices. “It really is collaborative,” she said. “Both teams bring a different way of looking at a problem. We have learned a lot through those interactions about how to approach problems differently.”