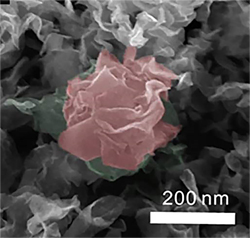 These inorganic “flowers,” color added, were created by Sandia National Laboratories researcher Stanley Chou and University of California, Merced colleague Vincent Tung in a spray-printing process that uses molybdenum disulfide to create a “flowering” hydrogen catalyst far cheaper than platinum and reasonably close in efficiency. (Image courtesy of Sandia National Laboratories) Click on the thumbnail for a high-resolution image.

ALBUQUERQUE, N.M. — Replacing your everyday gas guzzler with a hydrogen fueled car could drastically reduce your carbon footprint. So why don’t we all make the switch?

One of reasons we don’t is the expensive platinum catalyst required to operate hydrogen fuel cells efficiently.

Research led by Sandia National Laboratories and the University of California, Merced aimed at bringing down the cost of hydrogen fuel cells used a dirt-cheap compound to create an uneven surface that resembles a plant’s leaves. The additional area helps catalyze hydrogen almost as efficiently as platinum.

Lead researchers Stanley Chou, a Sandia materials scientist, and UC Merced’s Vincent Tung have applied for a joint patent for the spray-printing process, which uses inexpensive molybdenum disulfide. The increased surface area of the rippling “leaf” creates three times as many catalytic contact points as other molybdenum disulfide structures, and the new creation can handle higher temperatures than platinum without sintering and gumming up the cell.

The work is part of an effort to more cheaply power hydrogen-fueled cars, desirable because they emit water rather than carbon monoxide or carbon dioxide.

Nature as an ally

The production method uses nature as an ally rather than a hindrance, Chou said. “In traditional thinking, forces such as gravity, viscosity and surface tension must be overcome to achieve the manufactured shapes you desire. We thought, instead of thinking these forces as limitations, why not use them to do something useful? So, we did.”

Tung said the method uses natural processes to produce materials for extremely inexpensive fuel cell terminals to liberate hydrogen. “The printing process also allows for continued deposition, with the ability to scale for industry,” he said.

The team mixed molybdenum disulfide with water and used the printing process to expel micron-size droplets into an enclosed area about 2 feet high. As they dropped, the droplets first separated into nanoscopic subunits. These dried further as they fell, their shrinking volume producing an uneven 3-D surface much like the leaves of plants, with tiny ridges, hills, canals, caves and tunnels. Landing on a substrate and on each other, the “leaves” were still moist enough to bond as though attached at critical points by tiny droplets of glue. Thus, the nanostructures did not lose their individuality but instead, by maintaining their identities, created tiny tunnels within and between them that permitted extraordinary access for atoms of hydrogen to seek their freedom from chemical bonds.

The inspiration for creating a bio-inspired 3-D form arose from studying the cuticle folding process, a mechanism used by plants for controlling diffusion and permeability on leaf surfaces, Chou said.

“We see our catalyst as an inorganic material acting like a plant. The nanostructures, like leaves, are varied in shape, with tiny rises and falls,” he said. “The structures take in an external material to produce hydrogen rather than oxygen, and one day may be powered by sunlight.” Right now, very low-voltage electricity does the job.

Doubts about the strength of structure formed in such a serendipitous manner, Tung recounted, were settled when a 170-pound student unwittingly trod upon one of the first molybdenum disulfide-catalyst creations when it accidentally fell to the floor. A few hundred nanometers thick, it rested upon a centimeter-square carbon substrate but was otherwise unprotected. Elecromicroscopic investigation showed the tiny structure to be undamaged. The “leaves” also have proved to be long lasting, continuing to produce hydrogen for six months.

The work is the subject of a technical article published online in the journal Advanced Materials. Researchers from King Abdullah University of Science and Technology, Lawrence Berkeley National Laboratory and Yale University also contributed to the article.

The work at Sandia was funded by the Department of Energy’s Office of Science. Work at UC Merced was supported by a university startup fund.