Veterans hired at Sandia Labs triples over past year

ALBUQUERQUE, N.M. — The number of military veterans hired at Sandia tripled the last fiscal year, and marked the highest veteran hiring rate in the history of Sandia National Laboratories.

“Veteran hiring is a tremendous opportunity for the laboratories as we pursue excellence in our missions,” said Associate Labs Director Michael Burns. “They have dedicated themselves to national security, have tremendous teamworking skills, have proven success in a myriad of skills needed by the laboratories and often possess applicable security clearances.”

The Department of Labor’s Office of Federal Contract Compliance established a military hiring goal of 6.7 percent of all people hired, Martinez said. The last time Sandia met the goal, which is not a federal requirement, was in 2015.

“It takes a vibrant community to get these kinds of results and this has been a labswide effort. We’ve had a lot of support, engagement and focus,” Martinez said. 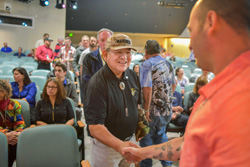 Marine Corps veteran Bennie Yazza was honored with all Sandia veterans at an annual celebration at Sandia National Laboratories on Monday. Yazza served in the Marines from 1974 to 1995 and has been a labs employee for 38 years. While Sandia has long attempted to recruit military veterans, the labs developed a strategic hiring initiative that led to triple the number of veterans hired in the last fiscal year. (Photo by Randy Montoya) Click on the thumbnail for a high-resolution image.

“In the broadest sense, hiring more veterans brings diversity of perspective, experience and skills to the labs,” Martinez said. “Diversity is an essential element of Sandia’s workforce and it needs to be a vital part of our future. Veterans are an essential part of that.”

While Sandia has long attempted to recruit military veterans, Martinez said, there wasn’t a formal strategy associated with these efforts. Beginning in early February, Sandia started working on the veteran hiring initiative.

“When I learned we had increased our veterans hiring by such a high margin, I was thrilled,” said Carol Manzanares, senior manager of Talent Acquisition. “Our veteran hiring strategy will be vital to our ability to meet the current and future workforce needs of Sandia.”

‘An employer of choice for veterans’

Veterans looking to work at Sandia can visit the Labs’ Careers website to view all job postings. Within the application process, they can disclose military service. Martinez said veterans should try to make sure their resumes reflect the experiences and skills they gained while serving the country and highlight applicable education and training.

Burns added, “Sandia can provide veterans the prospect of continued contributions to the nation in an exciting technical environment that has long been associated with the military community. We hope to be an employer of choice for veterans.”