LIVERMORE, Calif. — Using a microscopic method for measuring electrical potential, a team of scientists at Sandia National Laboratories may have discovered how to make a longer-lasting, more efficient battery.

“One of the challenges with solid-state batteries is that at the boundaries between different parts of the battery — a cathode and a layer of ion-conducting electrolyte, let’s say — something interferes with the flow of electrons,” Talin said. 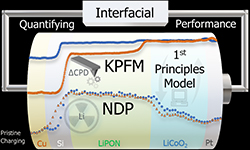 This illustration shows how a team at Sandia National Laboratories used Kelvin probe force microscopy to locate places where electron flows get stuck, potentially leading to engineering longer-lasting, more efficient batteries. (Illustration courtesy of S. Kelley/National Institute of Standards and Technology.) Click on the thumbnail for a high-resolution image.

Solid-state batteries employ solid electrolytes instead of electrochemical gels and liquids and generally power small electronics. Most researchers suspected that there was a loss of voltage or electrical potential at interfaces within the battery, but not which interface was responsible for most of the impedance in the battery. The team started work five years ago to get some clarity.

“There were two main motivations for this. The first was fundamental: we want to have good models for batteries that we can use to develop better materials,” Talin explained. “The second thing was to figure out how we can engineer the interfaces to make them less impeding. In our case, it really has to do a lot with how fast lithium ions can move in the Si anode used in the study.”

They turned to Kelvin probe force microscopy, which measures electrical potential on a surface, and while using instruments in new ways is certainly not something Sandia is unaccustomed to, what the team did next no one had ever done, Talin said.

“The voltage between battery electrodes is relatively straightforward for researchers to calculate and measure,” Fuller said. “However, where that voltage drops within the battery layers has remained a mystery. It’s critical to understand where the voltage drops, as it is intimately tied to the performance-limiting resistances. Kelvin probe force microscopy is a technique that finally enabled us to measure where these drops are occurring.”

“This technique has been used for many years to measure local voltage, with people using it on parts of a battery. It was difficult to interpret because it was not a full functioning battery,” Talin continued. “We cut the battery in half longitudinally, with the elements stacked like a layer cake. You can still charge it and discharge it, so we did this measurement over the entire battery.”

The team found that a large part of the electrical potential of the battery was getting lost at the boundary between the electrolyte and the anode (negative) terminal.

“Most people thought the biggest change was going to happen at the interface between the cathode (positive) and electrolyte,” he added. “Understanding the measurements took a lot of time. We wanted to validate the data by measuring where the lithium ions were at different states during charging.”

To accomplish this, the team worked with researchers at the National Institute of Standards and Technology Center for Neutron Research using a technique called neutron depth profiling that can measure where lithium ions are at a particular moment. Now that NDP has confirmed the Kelvin probe force microscopy data, the team is looking to apply this methodology to a host of technologies that will benefit the nation.

“We’re going to use this technique to look at other batteries as well as other solid-state electrical systems, like the electrochemical random access memory invented at Sandia,” Talin said. “This will allow us to develop devices that operate like we would like them to operate.”

The work was done in collaboration with NIST, Naval Research Labs, University of Maryland College Park and Brown University.  It was sponsored through Sandia’s Laboratory Directed Research and Development Lithium Battery Grand Challenge and the Nanostructures for Electrical Energy Storage Energy Frontiers Research Center as well as the Platforms core program, both led by the University of Maryland and sponsored by the DOE Office of Basic Energy Sciences.