ALBUQUERQUE, N.M. — Sandia National Laboratories and the University of New Mexico (UNM) have hired Fernando Garzon, a nationally recognized scientist and inventor, to work for both institutions. It is the first joint hire recruited together by Sandia and UNM. 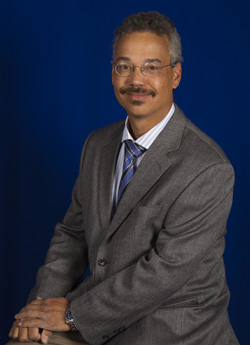 Fernando Garzon, who will join the staffs of Sandia National Laboratories and the University of New Mexico in September, has co-authored more than 130 scientific publications. He holds 10 patents in electrochemical technology and has been president of the Electrochemical Society. (Photo courtesy of Los Alamos National Laboratory) Click on the thumbnail for a high-resolution image.

“Sandia National Laboratories and the University of New Mexico have enjoyed a close relationship for many years in the areas of research, education, and technology development and deployment,” said Sandia Vice President and Chief Technology Officer Julia Phillips. “The joint-hire program is a natural development in that deepening partnership and one that promises new opportunities for even stronger collaborations between the two institutions.”

Garzon has been technical team leader for high temperature materials chemistry in the sensors and electrochemical devices group at Los Alamos National Laboratory (LANL). He holds a Bachelor of Science in metallurgy and materials science and a doctorate in materials science and engineering from the University of Pennsylvania. He joined LANL in 1988.

Garzon, who will start his new jobs in September , will concurrently hold the positions of research and development staff member at Sandia and tenured professor at UNM and will advance mutual interests in science and engineering. He will be considered a part-time employee of each institution with workspace provided by both.  He will split his time equally at each institution, and each will offer a separate salary and benefits package.

Work will focus on energy, collaboration

He will establish and lead a research program in materials science and engineering with an emphasis on energy technologies. The join-hire agreement specifies that he will initiate and foster research collaborations among UNM faculty and Sandia R&D staff. He will attract, mentor and direct junior faculty and Sandia researchers, post-docs and students to Sandia and UNM, and will help form strategic partnerships between Sandia, UNM and other research institutions.

“I am very excited to work with both UNM and Sandia National Laboratories,” Garzon said. “The synergies between the university and the national lab create a unique research environment to mutually develop advanced energy technologies.”

Sandia and UNM signed a memorandum of understanding in 2011 that identified areas for research collaboration and contemplated the joint hiring of nationally prominent faculty. Two Sandia researchers, Jeff Brinker and Rick Kemp, also work for UNM as professors, but were Sandia employees before joining the university. Garzon is the first hired as a joint employee.

Terry Aselage, director of Sandia’s Materials Science and Engineering Center and a member of the Sandia search team, praised the process for hiring Garzon. “The engagement from UNM leadership was fantastic, and the search committee members from both sides worked hard and well together. I am certain that these interactions will further the Sandia/UNM collaboration, and that the Advanced Materials Laboratory, which supports collaboration among Sandia, UNM and industry in materials R&D and tech transfer, will continue to serve as a flagship for these collaborations.”

Carol Adkins, director of Energy Technology and System Solutions at Sandia and also a search team member, said the hiring brought together people from legal, compensation, benefits and technical departments. “What UNM and Sandia hope to achieve with this joint hire is unique,” she said. “A goal was to institutionalize the process, and now that we’ve broken the ice we’ll be able to repeat this in other areas where both organizations want to drive strategic engagement.”

A liaison to develop staff from Sandia and UNM

Garzon holds 10 patents in electrochemical technology. He has been president of the Electrochemical Society and is a Fellow of the organization.

“As a distinguished, nationally known researcher with experience at a national laboratory and in academia, Dr. Garzon is ideal for serving as the liaison who helps pull together and develop staff from both worlds to tackle important research,” Phillips said. “His role should be to create new programs that draw on and benefit research staff and the important missions of both Sandia and UNM.”

“The cooperative arrangement also creates an outstanding education experience for the students and postdoctoral fellows,” Garzon said. “I will be actively engaged in energy storage and conversion research programs and the development of sensing technology to meet future needs for energy efficiency, environmental monitoring and national security.”