KAUAI, Hawaii — A white-orange oval, the rocket moves slowly, silently across the night sky, followed by a metallic roar that fades away the farther it flies from its launch pad at Sandia National Laboratories’ Kauai Test Facility. When the rocket is an orange ember against the black backdrop, it sparks momentarily as a Navy ship in the Pacific Ocean destroys it.

The rocket was a target for the Navy’s newest interceptor missile, the Standard Missile-3 Block IB. It was launched from the Pacific Missile Range Facility’s (PMRF) tenant, the Kauai Test Facility (KTF).

Established at the height of the Cold War, KTF celebrated its 50th anniversary this year. 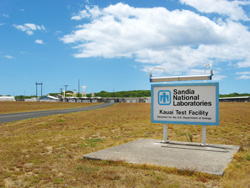 Sandia National Laboratories' Kauai Test Facility lies at the western tip of the Hawaiian island of Kauai. The 130-acre site wraps up its 50th year of operations this year. (Photo by Heather Clark) Click on the thumbnail for a high-resolution image.

“KTF has evolved into a national asset that is having a tremendous impact and provides incredible support for the ever-changing national security missions Sandia Labs is focusing on,” Salazar said.

A 130-acre site on the western tip of the Hawaiian island of Kauai operated by about two dozen people, KTF has launched more than 430 rockets since the facility was built in 1962, a year after the then-Soviet Union began full-scale atmospheric tests despite the Nuclear Testing Moratorium of 1958.

“The United States was caught, frankly, flat footed,” David Keese, director of Sandia’s Integrated Military Systems Center said, recounting the site’s history at an anniversary celebration. “We didn’t have any nuclear device carriers that could launch those into the upper reaches of the atmosphere, we didn’t have any sampling rockets so we could sample those effects and we didn’t have a launch facility that could do all that.”

To even up the playing field, the Atomic Energy Commission, predecessor to today’s Department of Energy, established KTF, then known as the Barking Sands site. (The name came from the sound the nearby coral sands make underfoot.)

KTF ensured that the U.S. was ready to resume nuclear testing until the program ended in 1976. During this time, Sandia became a national leader in small-rocket technology development. KTF also launched research, or sounding rockets, to study high altitude winds and to test designs and combinations of rocket motors, nose cones and fins. In the 1980s, KTF began supporting missile defense, a mission that continues today.

“Without the facility, the instrumentation and especially the people and expertise here, we would not have been a successful program,” he said.

During the launch, Sandia employees ran through three days of practice countdowns in the facility’s main operations center to prepare for the final launch of the single-stage guided missile to provide the Navy’s target.

Most people think of countdowns as a television voiceover saying, “10, 9, 8 …,” but they are much more. In each of the practice runs and in the final countdown, Sandia’s team must complete more than 500 steps to launch the missile in conjunction with PMRF and the Navy.

Reuben Martinez, test director for the launch, and Margaret Scheffer, the Sandia test officer, have jobs that involve major multitasking. They monitor 15 communications networks, or loops, chattering simultaneously. Sometimes they must problem-solve within seconds or risk delaying a launch, and they communicate with multiple agencies. 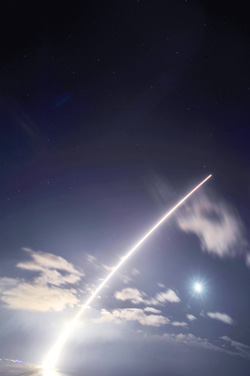 A target for the Navy's newest interceptor missile crosses the night sky after taking off from a vertical launcher at the Pacific Missile Range Facility's tenant, Sandia's Kauai Test Facility. (Photo by Scott Walkington) Click on the thumbnail for a high-resolution image.

Once the rocket takes off, KTF’s telemetry system receives thousands of data points from the rocket that will be analyzed and turned into graphic displays that help controllers quickly determine whether the rocket is flying along its intended flight path, he said. They use that information in real time — often processing it in milliseconds and making decisions based on it in seconds — to recommend whether to continue the mission. Telemetry data also is used after flights for further research to make changes when things don’t go the way they should, Martinez said.

As the latest rocket took off from the vertical launch pad, relief washed over the KTF and Sandia employees involved in preparation for the test, Martinez said.

The rocket flew straight. As a voice called out “Mark India!” to let PMRF know the Navy had successfully tested its missile, knocking the rocket from the sky, cheers erupted from a crowd of employees who had helped with the launch watching from a nearby field.

It’s all in a day’s work for the KTF staff. “You feel instantly excited that it’s over. Then you can breathe,” Scheffer said. “Then you start thinking about starting work on the next one.”