“Sandia has experience on the facilities side and a tremendous wealth of knowledge on the R&D side,” said Jack Mizner, manager of Facilities Partnerships and Planning at Sandia. “We’ve been trying to figure out for a long time how to connect the two. We think we’ve finally made the connection.” 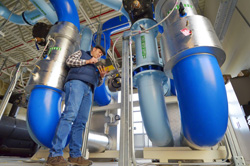 The goal is to institutionalize conservation and expand science and technology research to make Sandia a leading sustainability research and development lab. The labs would be a resource for businesses, governments and institutions that want to use Sandia technology in their own sustainability efforts. They can work with Sandia through collaborative research agreements, technology licensing and other partnerships.

“Recognition as a top-rank sustainability R&D lab will bring us more business,” said Sustainability Innovation Foundry organizer Howard Passell, an ecologist in Sandia’s Earth Systems Analysis group. “Sustainability is already one of the most important efforts in science and technology in the world, and will just become more so.”

Passell said the science and technology of sustainability are growing globally and at Sandia in fields such as climate, alternative and renewable energies, carbon sequestration, micro and smart grids, energy and water conservation, transportation, urban planning, infrastructure and the security of ecosystems around energy, water and food supplies.

“We believe sustainability will be increasingly important as population and resource consumption go up and resource availability goes down,” Passell said. “We want to make Sandia a world leader in sustainability science and technology, both institutionally through our conservation footprint and through application of our research to develop tools that can be used all over the world.”

Chemist Margaret Ochs, another organizer, said government and industry are looking for ways to embrace sustainability. “Sandia should be a leader in demonstrating and researching effective ways for institutions to become sustainable,” she said.

Sandia is on track to meet an ambitious goal of cutting energy intensity in buildings 30 percent by 2015, using a 2005 baseline, Mizner said. Strategies include free cooling — using cold, dry outside air in late fall, winter and early spring to chill water for air conditioning — and sophisticated controls on lighting, air flow, heating and cooling. Water usage has been reduced significantly through such efforts as replacing Sandia’s steam plant with centralized boilers. And eight buildings, or more than 10 percent of the labs’ total square footage, are Leadership in Energy and Environmental Design, or LEED, certified by the U.S. Green Building Council.

Mizner said foundry projects could lead to even greater energy savings. “We are trying to be a model for the Department of Energy and the federal government of how you can run effective mission-critical operations and still be sustainable,” he said.

The foundry’s first funded project is Institutional Transformation, a computer simulation of the costs and benefits of different energy and water conservation scenarios for buildings at Sandia in New Mexico and California. “The idea is that buildings in developed countries consume a lot of energy and water. Usage will be forced down by energy and other resources shortages,” Passell said. “So how do you transform infrastructure to lower the footprint when you have 700 buildings across two sites and hundreds of square miles? How do you go about doing it in a cohesive, thoughtful way?”

He said the project will produce a comprehensive strategy for future development and identify where investments are needed to shrink Sandia’s energy footprint and improve sustainability.

The foundry will also develop proposals, workshops, papers, collaborations and projects to raise the profile of sustainability at Sandia and create links between sustainability and national security. “By creating a foundry central to our work on energy, water and food resources that relate to sustainability, we will draw more attention from potential sponsors to the concentration of work here,” Ochs said.