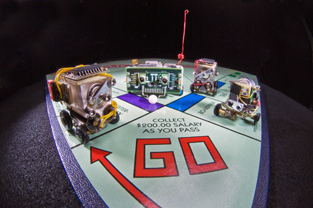 Miniature autonomous robotic vehicles were developed in the mid-1990s and led to the creation of superminiature robots in 2001, which were selected by Time magazine as the invention of the year in robotics in 2001. (Photo by Randy Montoya) Click on the thumbnail for a high-resolution image.

ALBUQUERQUE, N.M. – In a nod to Sandia Labs’ contributions to the field of robotics, the Smithsonian Institution has obtained nine of Sandia’s historically significant robots for its permanent collection at the National Museum of American History.

“For the Smithsonian to request Sandia technology for their collections is an external recognition of the significance of Sandia National Laboratories’ contributions to the nation,” said Philip Heermann, Senior Manager of Sandia’s Intelligent Systems, Robotics and Cybernetics, and participant in the signing ceremony at the museum. “The Smithsonian selected Sandia robots for inclusion after they researched the history of robotics and they found worldwide references, all pointing back to Sandia robotics as early pioneers.”

A Smithsonian curator contacted Sandian and former robotics engineer Ray Byrne earlier this year about obtaining some MARV robots, or Miniature Autonomous Robotic Vehicles, that made headlines in the mid-1990s as one of the first miniature robots developed in the U.S. Taking up no more than one cubic inch of space, MARV housed all necessary power, sensors, computers and controls on board and held promise for exciting future applications for medicine and the military.

Retired Sandia robotic senior scientist Barry Spletzer, who was instrumental in creating MARV and the leaping Hopper robot, spoke at the transfer ceremony about the significance of the robots. “Nothing like MARV had ever been built before,” Spletzer said. “We never expected recognition and certainly never thought we’d end up in the Smithsonian. This is certainly a career achievement.”

As the Smithsonian soon found out, MARV was just the tip of the iceberg of Sandia’s contributions to the advancement of the robotics field.

“The curator said they were looking for anything of historical significance. We have a lot that fit that requirement, so I started mentioning all of these older robots, and she was very interested,” Byrne said. “So far, we’ve donated Dixie, the first battlefield scout robot, SIR, one of the first truly autonomous interior robots, the hopping robots, the NETBOTS, MARV and the descendants of MARV, the super-miniature robots.” 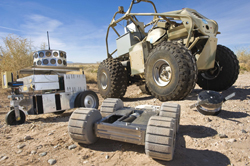 Sandia interior robot, or SIR, (left) was developed in 1985 and was one of the first truly autonomous interior robots; Dixie (upper right) was created in 1987 as one of the earliest battlefield scout robots; and Hopping Robots (lower right) are able to navigate autonomously onto or over obstacles. (Photo by Randy Montoya) Click on the thumbnail for a high-resolution image.

The Sandia Interior Robot, or SIR, made a lasting impression on the nation when it was introduced in 1985 as the first truly autonomous interior robot. At the time, SIR was the only robot able to navigate a building without a preprogrammed pathway or floor wiring to find its way. It could run in manual or autonomous modes using navigational software, also developed at Sandia. SIR could perform such dangerous work as disposing of radioactive waste or gathering military intelligence in a hostile environment.

In 1987, Sandia unveiled Dixie, the first battlefield scout robot. The all-terrain vehicle could perform reconnaissance in a variety of landscapes. Dixie uses teleoperation with advanced navigation aids to enhance a remote operator’s understanding of surrounding terrain.

The Hopper made history when it debuted in 2000 for its unique ability to hop 20 feet in the air over walls and other obstacles. With applications for planetary exploration, gathering intelligence in war and assisting police during standoffs or surveillance operations, the Hopper was the first robot powered by a combustion cylinder and a piston foot, and the wheeled Hopper was the first hybrid hopping/wheeled mobility system.

Sandia continued to wow the robotics field with the introduction of “superminature robots” in 2001. These tiny robots, descended from MARV, are small enough to scramble through pipes or buildings to look for human movement or chemical plumes. Less than ¼ cubic inch in size, these robots could “turn on a dime and park on a nickel,” and could include such enhancements as miniature cameras, microphones, communication devices and chemical microsensors. They could communicate with one another and work together, much like insects in a swarm. The superminiature robots were selected by Time magazine as the invention of the year in robotics in 2001.

The related NETBOTS are roughly the size of a remote-controlled toy car and are built on the same platform. With more than 20 vehicles in the group, at the time, they comprised the largest team of cooperating small robots ever developed. They could communicate with and locate one another. NETBOTS operated on a network that allowed vehicles to pass messages and camera images to other vehicles out of the line of sight, for such military applications as explosive ordinance removal.

“These are historically significant,” Byrne said. “I am pleased that the Smithsonian has chosen to recognize Sandia’s contribution to robotics.”