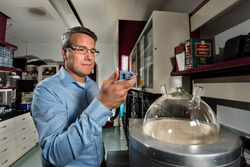 Sandia National Laboratories materials chemist Dale Huber has worked to make nanoparticles the exact same size for 15 years. His long-term collaborators at Imagion Biosystems will use these magnetic nanoparticles for their first breast cancer clinical trial later this year. He is holding a microfluidic chip that can make tiny amounts of nanoparticles. The round-bottom flask beside him can be used for making much larger quantities of nanoparticles. (Photo by Randy Montoya) Click on the thumbnail for a high-resolution image.

Now, he and his long-term collaborators at Imagion Biosystems will use these magnetic nanoparticles for their first breast cancer clinical trial later this year. The nanoparticles stick to breast cancer cells, allowing the detection and removal of even small metastases.

Imagion Biosystems and Huber have been working together synthesizing nanoparticles since the opening of the Center for Integrated Nanotechnologies in 2006.

“Having access to the talent pool at CINT with experts like Dale Huber has been helpful,” said Bob Proulx, CEO of Imagion Biosystems. “Additionally, the fact that CINT has a user program that allows industry to access the facilities and equipment that, otherwise, would be too expensive for a small company like ours was valuable. The initial work we did with CINT to develop a method to give precise control over the size of the nanoparticle was key for our MagSense magnetic relaxometry technology for the detection of cancer.”

CINT is a user facility jointly operated by Sandia and Los Alamos National Laboratory for the U.S. Department of Energy’s Office of Science. CINT provides free access to state-of-the-art equipment and world-leading scientists for nanoscience researchers in academia and industry, provided they publish the results in scientific journals.

The magnetic nanoparticles are coated with cancer antibodies, which stick specifically to cancerous cells. A tiny magnetic pulse — about the strength of a refrigerator magnet and hundreds of times weaker than one produced by an MRI machine — can sense the difference between nanoparticles stuck to cancer cells and those that are floating freely, allowing the detection of very small metastases.

However, for Imagion Biosystems’ cancer detection method to work, all the nanoparticles have to be almost exactly the same size.

“A 2 percent variation is the difference between perfect and just about useless,” said Huber. He added laughing, “It was eye opening for me and if had I known that in the beginning, I might not have taken on the challenge.”

Erika Vreeland, who worked with Huber during her doctoral thesis to develop reproducible synthesis and was hired by Imagion Biosystems to be their chief nanoparticle scientist after she graduated said, “We eliminated all of the witchcraft of the reaction.”

Instead, Vreeland and Huber developed a method where they slowly add the ingredients to a molten metal bath whose temperature varies less than half a degree. This produces nanoparticles with less than 2 percent size variation. Huber said, “It’s not the easiest way to make particles, but that’s why they’re so much better.”

Not only did the team discover a highly reproducible method to make the tiny particles, they also transferred the process twice — once to Imagion and once to ChemConnection, a nanoparticle manufacturer in the Netherlands that can make the nanoparticles under the strict U.S. Food and Drug Administration and European Union regulations needed for use in patient clinical trials.

“The synthesis was transferred to the lab in the Netherlands while maintaining size control,” said Huber. “This is huge. Everything changes, even the boiling points, because the Netherlands is basically at sea level.”

Clinical trial to detect spread of breast cancer this fall

“Because the nanoparticles are uniform and have excellent magnetic properties, we don’t need a lot. We expect that a patient will be injected with at most 1 milligram of particles,” said Vreeland.

All of the patients for the first clinical trial will be selected because their oncologists’ treatment regimen includes lymph node removal and biopsy. Before each patient has several lymph nodes removed surgically, the magnetic nanoparticles, coated in the breast cancer-specific antibodies, will be injected at the site of the known tumors. After the removal but before the biopsy, Imagion Biosystems’ detection system will examine removed lymph nodes to look for the spread of cancer.

Vreeland said she hopes Imagion Biosystems’ method will be as accurate as a pathologist, with the eventual goal of using this method first to look for cancer and eliminate the need to remove cancer-free lymph nodes.

“Our No. 1 aspiration is to see the nanoparticles make it into regular clinical use with our MagSense cancer detection technology. Beyond that we believe the nanoparticles can be instrumental in a wide variety of biomedical applications including uses in treatment of cancer or other diseases,” said Proulx.

CINT and Imagion Biosystems continued the collaboration beyond the effort to produce identically sized magnetic nanoparticles. Vreeland said, “We still run into all sorts of issues all the time so being able to talk with Dale or other scientists about some of the challenges we’re facing is really invaluable.”

Small angle X-ray scattering is a method to determine the size and size distribution of nanoscale materials. “With CINT’s X-ray scattering instrument we can figure out exactly how big the particles are in 15 minutes. Seven or eight years ago it would take a week to figure out the same thing using electron microscopy,” said Huber.

This almost real-time size measurement enabled Vreeland to predict how the reaction would end and validate that they were on the right path, she said. The team used other CINT instruments to characterize the magnetic strength and coatings of the nanoparticles.

In addition to accessing the CINT experts and equipment through its user program, the partnership with Imagion Biosystems was supported by several New Mexico Small Business Assistance Program grants, which can support proprietary research.

The team has published several papers from the collaboration including one in Chemistry of Materials in 2015.